Jump to navigation Jump to search
Not to be confused with New Keynesian economics.
Post-war school of macroeconomic thought based on the work of John Maynard Keynes

Neo-Keynesian economics is a school of macroeconomic thought that was developed in the post-war period from the writings of John Maynard Keynes. A group of economists (notably John Hicks, Franco Modigliani and Paul Samuelson), attempted to interpret and formalize Keynes' writings and to synthesize it with the neoclassical models of economics. Their work has become known as the neoclassical synthesis and created the models that formed the core ideas of neo-Keynesian economics. These ideas dominated mainstream economics in the post-war period and formed the mainstream of macroeconomic thought in the 1950s, 1960s and 1970s.[1]

A series of developments occurred that shook neo-Keynesian theory in the 1970s as the advent of stagflation and the work of monetarists like Milton Friedman cast doubt on neo-Keynesian theories. The result would be a series of new ideas to bring tools to Keynesian analysis that would be capable of explaining the economic events of the 1970s. The next great wave of Keynesian thinking began with the attempt to give Keynesian macroeconomic reasoning a microeconomic basis. These new Keynesians helped create a "new neoclassical synthesis" that currently forms the mainstream of macroeconomic theory.[2][3][4]

Following the emergence of the new Keynesian school, neo-Keynesians have sometimes been referred to as "Old-Keynesians".[5]

John Maynard Keynes provided the framework for synthesizing a host of economic ideas present between 1900 and 1940 and that synthesis bears his name, as is generally known as Keynesian economics. The first generation of Keynesians were focused on unifying the ideas into workable paradigms, combining them with ideas from classical economics and the writings of Alfred Marshall.

These neo-Keynesians generally looked at labor contracts as sources of wage stickiness to generate equilibrium models of unemployment. Their efforts (known as the neo-classical synthesis) resulted in the development of the IS–LM model and other formalizations of Keynes' ideas. This intellectual program would produce eventually monetarism and other versions of Keynesian macroeconomics in the 1960s. 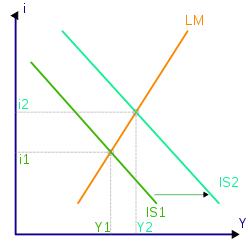 After Keynes, Keynesian analysis was combined with neoclassical economics to produce what is generally termed "the neoclassical synthesis", which dominated mainstream macroeconomic thought from the 1950s to the 1970s. Though it was widely held that there was no strong automatic tendency to full employment, many believed that if government policy were used to ensure it, the economy would behave as classical or neoclassical theory predicted.

In the post-World War II years, Keynes's policy ideas were widely accepted. For the first time, governments prepared high quality economic statistics on an regular basis and had a theory that could answer questions about how to influence the macroeconomy.

It was with John Hicks that Keynesian economics produced a clear model which policy-makers could use to attempt to understand and control economic activity. This model, the IS–LM model, is nearly as influential as Keynes' original analysis in determining actual policy and economics education.

It relates aggregate demand and employment to three exogenous quantities, i.e. the amount of money in circulation, the government budget and the state of business expectations. This model was very popular with economists after World War II because it could be understood in terms of general equilibrium theory. This encouraged a much more static vision of macroeconomics than that described above. 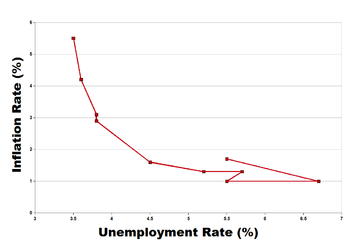 The second main part of a Keynesian policy-maker's theoretical apparatus was the Phillips curve. This curve, which was more of an empirical observation than a theory, indicated that increased employment over unemployment implied increased inflation. Keynes had only predicted that increase employment would cause a higher price, not a higher inflation rate[clarification needed]. Thus the economist could use the IS–LM model to predict, for example, that an increase in the money supply would raise output and employment—and then use the Phillips curve to predict an increase in inflation.

The strength of Keynesianism's influence can be seen by the wave of economists which began in the late 1940s with Milton Friedman. Instead of rejecting macro-measurements and macro-models of the economy, they embraced the techniques of treating the entire economy as having a supply and demand equilibrium, but unlike the Keynesians—they argued that "crowding out" effects would hobble or deprive fiscal policy of its positive effect. Instead, the focus should be on monetary policy, which was largely ignored by early Keynesians. The monetarist critique pushed Keynesians toward a more balanced view of monetary policy and inspired a wave of revisions to Keynesian theory.

Through the 1950s, moderate degrees of government demand leading industrial development and use of fiscal and monetary counter-cyclical policies continued and reached a peak in the "go go" 1960s, where it seemed to many Keynesians that prosperity was now permanent. However, with the oil shock of 1973 and the economic problems of the 1970s, modern liberal economics began to fall out of favor. During this time, many economies experienced "stagflation" : high and rising unemployment, coupled with high and rising inflation, contradicting the Phillips curve's prediction.

This stagflation meant that both expansionary (anti-recession) and contractionary (anti-inflation) policies had to be applied simultaneously, a clear impossibility. This dilemma led to the rise of ideas based upon more classical analysis, including monetarism, supply-side economics and new classical economics. This produced a "policy bind" and the collapse of the Keynesian consensus on the economy, leading to the development of new classical macroeconomics and new keynesianism.[6] In the following decades, these two schools would come together to create the new neoclassical synthesis that forms the basis of mainstream economics today.[7][8][9]

Retrieved from "http://en.turkcewiki.org/w/index.php?title=Neo-Keynesian_economics&oldid=977548698"
This website is a mirror of Wikipedia, and is not affiliated with the Wikimedia Foundation.
Categories:
Hidden categories: