(Redirected from NASDAQ)
Jump to navigation Jump to search
American stock exchange
This article is about the stock exchange. For the stock market index, see NASDAQ Composite.

listen) also known as Nasdaq, is an American stock exchange located at One Liberty Plaza in New York City. It is ranked second on the list of stock exchanges by market capitalization of shares traded, behind only the New York Stock Exchange.[2] The exchange platform is owned by Nasdaq, Inc.,[3] which also owns the Nasdaq Nordic stock market network and several U.S. stock and options exchanges.

"Nasdaq" was initially an acronym for the National Association of Securities Dealers Automated Quotations.[4]

It was founded in 1971 by the National Association of Securities Dealers (NASD), now known as the Financial Industry Regulatory Authority (FINRA).[5]

On February 8, 1971, the Nasdaq stock market began operations as the world's first electronic stock market.[5] At first, it was merely a "quotation system" and did not provide a way to perform electronic trades.[6] The Nasdaq Stock Market helped lower the bid–ask spread (the difference between the bid price and the ask price of the stock), but was unpopular among brokers as it reduced their profits.

The NASDAQ Stock Market eventually assumed the majority of major trades that had been executed by the over-the-counter (OTC) system of trading, but there are still many securities traded in this fashion. As late as 1987, the Nasdaq exchange was still commonly referred to as "OTC" in media reports[7] and also in the monthly Stock Guides (stock guides and procedures) issued by Standard & Poor's Corporation.[citation needed]

Over the years, the Nasdaq Stock Market became more of a stock market by adding trade and volume reporting and automated trading systems.

In 1998, it was the first stock market in the United States to trade online, using the slogan "the stock market for the next hundred years".[9] The Nasdaq Stock Market attracted many companies during the dot-com bubble.

Its main index is the NASDAQ Composite, which has been published since its inception. The QQQ exchange-traded fund tracks the large-cap NASDAQ-100 index, which was introduced in 1985 alongside the NASDAQ Financial-100 Index, which tracks the largest 100 companies in terms of market capitalization.

In 1992, the Nasdaq Stock Market joined with the London Stock Exchange to form the first intercontinental linkage of capital markets.[10]

In 2000, the National Association of Securities Dealers spun off the Nasdaq Stock Market to form a public company. 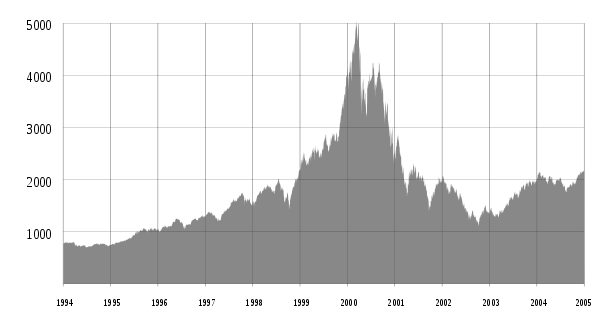 The NASDAQ Composite index spiked in the late 1990s and then fell sharply as a result of the dot-com bubble. 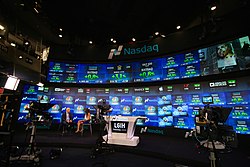 In 2006, the status of the Nasdaq Stock Market was changed from a stock market to a licensed national securities exchange.[14]

In 2010, Nasdaq merged with OMX, a leading exchange operator in the Nordic countries, expanded its global footprint, and changed its name to the NASDAQ OMX Group.[15]

To qualify for listing on the exchange, a company must be registered with the United States Securities and Exchange Commission (SEC), must have at least three market makers (financial firms that act as brokers or dealers for specific securities) and must meet minimum requirements for assets, capital, public shares, and shareholders.

In February 2011, in the wake of an announced merger of NYSE Euronext with Deutsche Börse, speculation developed that NASDAQ OMX and Intercontinental Exchange (ICE) could mount a counter-bid of their own for NYSE. NASDAQ OMX could be[when?] looking to acquire the American exchange's cash equities business, ICE the derivatives business. At the time, "NYSE Euronext's market value was $9.75 billion. Nasdaq was valued at $5.78 billion, while ICE was valued at $9.45 billion."[16] Late in the month, Nasdaq was reported to be considering asking either ICE or the Chicago Mercantile Exchange to join in what would probably have to be, if it proceeded, an $11–12 billion counterbid.[17]

The European Association of Securities Dealers Automatic Quotation System (EASDAQ) was founded as a European equivalent to the Nasdaq Stock Market. It was purchased by NASDAQ in 2001 and became NASDAQ Europe. In 2003, operations were shut down as a result of the burst of the dot-com bubble.[21] In 2007, NASDAQ Europe was revived first as Equiduct, and later that year, it was acquired by Börse Berlin.[22]

In November 2016, chief operating officer Adena Friedman was promoted to chief executive officer, becoming the first woman to run a major exchange in the U.S.[25]

In October 2018, the SEC ruled that the New York Stock Exchange and Nasdaq did not justify the continued price increases when selling market data.[27][28][29]

The Nasdaq Stock Market sessions, with times in the Eastern Time Zone are:

The Nasdaq Stock Market averages about 253 trading days per year.

Retrieved from "http://en.turkcewiki.org/w/index.php?title=Nasdaq&oldid=934982471"
This website is a mirror of Wikipedia, and is not affiliated with the Wikimedia Foundation.
Categories:
Hidden categories: