(Redirected from Mythology of Armenia)
Jump to navigation Jump to search 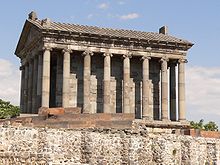 Side view of the Garni Temple.

The pantheon of Armenian gods, initially worshipped by Proto-Armenians, inherited their essential elements from the religious beliefs and mythologies of the Proto-Indo-Europeans and peoples of the Armenian Plateau. Historians distinguish a significant body of Indo-European language words which were used in Armenian pagan rites. The oldest cults are believed to have worshipped a creator called Ar[4] (or possibly Ara), embodied as the sun (Arev or Areg); the ancient Armenians called themselves "children of the sun". Also among the most ancient types of Indo-European-derived worship are the cults of eagles and lions, and of the sky.[5]

After the establishment of Iranian dominance in Armenia in the 1st millennium BCE, Zoroastrianism had a major influence on Armenian religion. Until the late Parthian period, the Armenian lands adhered to a syncretic form of Mazdaism, which mixed Iranian religious concepts with traditional Armenian beliefs.[6] For example, the supreme god of the Armenian pantheon, Vanatur, was later replaced by Aramazd (the Parthian form of Ahura Mazda).[6] However, the Armenian version of Aramazd preserved many native Armenian aspects. Similarly, the traditional Armenian goddess of fertility, Nar, was replaced by Anahit, which may derived from Persian Anahita, although the Armenian goddess was entirely distinct from her Iranian counterpart.

In the Hellenistic age (3rd to 1st centuries BC), ancient Armenian deities were identified with ancient Greek deities: Aramazd with Zeus, Anahit with Artemis, Vahagn with Hercules, Astghik with Aphrodite, Nane with Athena, Mihr with Hephaestus, Tir with Apollo.

After the formal adoption of Christianity in the 4th century CE, ancient myths and beliefs transformed to adhere more closely to Christian beliefs. Biblical characters took over the functions of the archaic gods and spirits. For example, John the Baptist inherited certain features of Vahagn and Tir, and the archangel Gabriel took on elements of Vahagn.

Basic information about Armenian pagan traditions were preserved in the works of ancient Greek authors such as Plato, Herodotus, Xenophon and Strabo, Byzantine scholar Procopius of Caesarea, as well as medieval Armenian writers such as Moses of Chorene (Movses Khorenatsi), Agathangelos, Yeznik of Kolb, Sebeos, and Anania Shirakatsi, as well as in oral folk traditions.

The pantheon of pre-Christian Armenia changed over the centuries. Originally native Armenian (from Proto-Indo-European) in nature, the pantheon was modified through Anatolian, Hurro-Urartian, Semitic, Iranian, and Greek influences.

One common motif that spanned many or all pagan Armenian pantheons was the belief in a ruling triad of supreme gods, usually comprising a chief, creator god, his thunder god son, and a mother goddess.

These gods are believed to have been native Armenian gods, worshipped during the earliest eras of Armenian history (Proto-Armenian). Many, if not all, of them are believed to have derived from Proto-Indo-European religious traditions. There is also likely influence from the indigenous beliefs of the Armenian Highlands.

While the exact relationship between the Bronze Age kingdom of Hayasa-Azzi and Armenians is uncertain, many scholars believe that there is a connection (compare Hayasa with the Armenian endonyms Hayastan and Hay). Not much is known about the Hayasan pantheon but some names survive via Hittite records. The triad may have comprised U.GUR, INANNA, and Tarumu.[19]

The gods of the Urartian pantheon were mostly borrowed from Hittite and Luwian, Hurrian, Semitic, and possibly Armenian and Indo-Iranian religions.

Zoroastrian influences penetrated Armenian culture during the Achaemenid Empire, though conversion was incomplete and syncretistic, and the Persians and Armenians never appeared to identify with each other as co-religionists[2] despite both referring to themselves as "Mazda worshipers."[3] 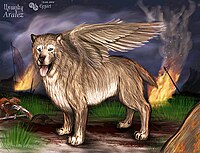 Shamiram stares at the corpse of Ara the Beautiful (painting by Vardges Sureniants, 1899).

These figures are mainly known through post-Christian sources, but may have belonged to the pre-Christian mythology.[33] Many seem to be derived from Proto-Indo-European mythologies and religious traditions. It is suspected that Hayk, Ara, and Aram were originally deities, possibly from the oldest Armenian pantheon.[37]

Retrieved from "http://en.turkcewiki.org/w/index.php?title=Armenian_mythology&oldid=939626370"
This website is a mirror of Wikipedia, and is not affiliated with the Wikimedia Foundation.
Categories:
Hidden categories: