A mutual savings bank is a financial institution chartered by a central or regional government, without capital stock, that is owned by its members who subscribe to a common fund. From this fund claims, loans, etc., are paid. Profits after deductions are shared among the members. The institution is intended to provide a safe place for individual members to save and to invest those savings in mortgages, loans, stocks, bonds and other securities and to share in any profits or losses that result. The members own the business.

The institution most frequently identified as the first modern savings bank was the "Savings and Friendly Society" organized by the Reverend Henry Duncan in 1810, in Ruthwell, Scotland. Rev. Duncan established the small bank in order to encourage his working class congregation to develop thrift. Another precursor of modern savings banks were the ideas Friedrich Wilhelm Raiffeisen that led to rural credit unions and cooperative banks. European voluntary organizations and "friendly societies" provided the inspiration for their state incorporated American counterparts.

These first savings banks were envisioned as philanthropic endeavors, designed to uplift the poor and working classes. The banks were started by philanthropists, who took on the positions of savings bank trustees, managers, and directors as opportunities to teach the working class the virtues of thrift, and self-reliance by allowing them the security to save their money. The first incorporated US mutual savings bank was the Provident Institution for Savings, in Boston. Its 1816 charter was the first government legislation in the world to safeguard savings banks. In 2015, the oldest (and largest) mutual bank in the U.S. is Eastern Bank of Boston, with approximately $10 billion in assets. It was chartered in 1818 in Salem, Massachusetts as the Salem Savings Bank. 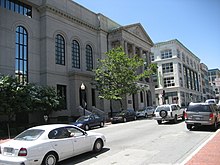 Mutual savings banks are common in New England. New Bedford Institution For Savings was founded in 1825, and converted from mutual to stock status in 1987.

Since the 1970s, when the industry was deregulated, thousands of mutual savings banks have been converted into stock ownership companies, raising more than $40 billion. In 2010, only about 600 remained.[1] These conversions have often resulted in large financial rewards for top bank executives.[2] Current mutual saving banks include Eastern Bank, Dollar Bank, Ridgewood Savings Bank, Middlesex Savings Bank, and Liberty Bank.

Beginning in the 1980s, several building societies in Australia converted to banks but were required to demutualise when doing so. These included Advance Bank (formerly NSW Building Society), St. George, Suncorp, Metway Bank, Challenge Bank, Bank of Melbourne and Bendigo Bank. A change in regulation meant that building societies and credit unions were no longer required to demutualise upon converting to banks, and several including Heritage Bank have converted since 2011 while retaining their status and structure as mutual organisations.

Retrieved from "http://en.turkcewiki.org/w/index.php?title=Mutual_savings_bank&oldid=927911616"
This website is a mirror of Wikipedia, and is not affiliated with the Wikimedia Foundation.
Categories: