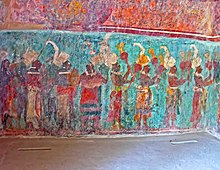 "In its broadest sense, music archaeology is the study of the phenomenon of past musical behaviours and sounds", as music archaeologist Adje Both connects several definitions.[2] Music archaeologists use methods of both musicology and archaeology. A theoretical and methodological basic work is still missing and one of the main areas of interest for the international community of researchers.[3]

There are different goals in music archaeology; one of the most important is the exploration of excavated artefacts that are relevant for the reconstruction of ancient music, such as sound-producing devices, representations of musical scenes and textual evidence. The archaeological analysis and documentation of such artefacts, their dating and description as well as the explanation of find contexts and cultural contexts can shed light on its use and function in everyday life of the past, and can help us to rebuild them (i.e., to construct playable replicas). To produce music in a broader sense may also mean the investigation of early musical notations and literary sources that are "excavated" in libraries or other hidden places. These results may illuminate how instruments were played or how music was sung, but ultimately what was played in ancient times must remain in the dark of the past, and much fantasy is needed by modern musicians to imagine how melodies and rhythms may have been composed. Strictly speaking, only the sound of the instruments can be revived – these are the possibilities and limits of music archaeology.

In the last few years the field has expanded considerably, with the inclusion of neurophysiological, biological, and psychological research. These approaches explore the possible beginnings of sound production by seeking the earliest prerequisites in the evolution of mankind for music making and musical 'understanding'. At the other end of the continuum, newly published evidence for musical notation and theoretical writings, or new literary and iconographic sources relevant to ancient music, can add to our understanding of mostly vanished music cultures. The observation and integration of ethnographic analogies in recent or contemporary societies may also help us discover long lasting traditions in making music which are comparable to the silent past.

A first attempt to join the two distinct disciplines of musicology and archaeology took place at the conference of the International Musicological Society at Berkeley in 1977. One of the round tables was designated "Music and Archaeology", to which were invited specialists to discuss the musical remains of ancient cultures: Bathia Bayer (Israel), Charles Boilès (Mexico), Ellen Hickmann (Egypt), David Liang (China), Casja Lund (Scandinavia). The main stimulus for this was the sensational discovery of an ancient Mesopotamian musical system by Anne D. Kilmer, Assyriologist in Berkeley. On the basis of this she was able to advance a decipherment and transcription into Western notation of a late Bronze Age hymn in the Hurrian language, excavated from Ugarit, which contained notation based on the Mesopotamian system. With the help of musicologist Richard L. Crocker (Berkeley) and instrument maker Robert Brown, a replica of a Sumerian lyre was made, and Kilmer's version of the Hurrian hymn was recorded, accompanied by a carefully prepared commentary, as Kilmer/Crocker/Brown, Sounds from Silence, Recent Discoveries in Ancient Eastern Music (LP with information booklet, Bit Enki Publications, Berkeley, 1976). At the round table in Berkeley, Kilmer explained their method of reconstruction and demonstrated the resulting sound. This was the starting point of the ICTM Study Group on Music Archaeology, officially founded within the International Council for Traditional Music (ICTM) in Seoul/Korea in 1981, and recognized by the ICTM in New York in 1983 following its first meeting on current music-archaeological research in Cambridge/UK in 1982.

The ICTM Study Group on Music Archaeology went on to hold international conferences in Stockholm (1984), Hannover/Wolfenbüttel (1986), Saint Germain-en-Laye (1990), Liège (1992), Istanbul (1993), Jerusalem (1994/1995, together with the ICTM-Study Group for Iconography), and Limassol, Cyprus (1996). These meetings resulted in comprehensive conference reports.

The International Study Group on Music Archaeology (ISGMA) has been founded by Ellen Hickmann and Ricardo Eichmann in 1998. The Study Group emerged from the ICTM Study Group on Music Archaeology with the objective to obtain closer cooperation with archaeologists. Since then, the ISGMA has worked continuously with the German Archaeological Institute, Berlin (DAI, Deutsches Archäologisches Institut, Berlin). A new series called "Studien zur Musikarchäologie" was created as a sub-series of "Orient-Archäologie" to present the conference reports of the ISGMA, and to integrate music-archaeological monographs independent of the Study Group's meetings; it is published by the Orient Department of the DAI through the Verlag Marie Leidorf. Between 1998 and 2004, conferences of ISGMA were held every two years at Michaelstein Monastery, Music Academy of Sachsen-Anhalt (Kloster Michaelstein, Landesmusikakademie Sachsen-Anhalt), sponsored by the German Research Foundation (DFG, Deutsche Forschungsgemeinschaft).

Meanwhile, the ICTM Study Group on Music Archaeology continued separately, and holds its own events, although a number of researchers are involved in both groups. After a couple of years of inactivity, Julia L. J. Sanchez re-established the Study Group in 2003 on the initiative of Anthony Seeger, beginning with meetings in Los Angeles, California (2003), and Wilmington, North Carolina (2006). These were followed by a joint-conference in New York (2009), the 11th of the Study Group since its foundation in 1981 (also the 12th Conference of the Research Center for Music Iconography). The 12th conference was then held in Valladolid, Spain (2011), which was the largest meeting of the ICTM Study Group so far, followed by the 13th Symposium of the Study Group held in Guatemala 2013. In 2015, the 14th symposium will be held in Poland. In 2013 it was decided to establish a new series, Publications of the ICTM Study Group on Music Archaeology, published through Ekho Verlag.

On 27 May 2011, a public concert under the banner of Palaeophonics, funded by the Arts and Humanities Research Council (AHRC) Beyond Text programme and the University of Edinburgh Campaign, took place at the George Square Theatre in Edinburgh. The event showcased the outcomes of collaborative research and creative practice by archaeologists, composers, filmmakers and performers from across Europe and the Americas. Whilst inspired and driven by research in music archaeology, Palaeophonics represents the emergence of a new, possibly significant, development within the field and within musicology which approaches the subject through the production and performance of new sound and music based multi-media creative works instead of through direct representation and reproduction. Said by some observers as 'experimental' and 'avant-garde', the event provoked mixed feedback from a wide public audience of around 250 people. A related publication is planned and further Palaeophonics events are thought to be taking place in the future, although none are currently programmed, whilst funding for developing the project is sourced.

In 2013, the European Music Archaeology Project (EMAP) has been funded by the EU funding programme EACEA, for the period of five years. The project will develop a touring exhibition on ancient music in Europe and an elaborate concert and event program.[4][5]

Music archaeology is an interdisciplinary field with multifaceted approaches.[6] Music archaeology falls under the cross section of experimental archaeology and Musicology research.[7] The goals of research for Music archaeology is to understand past musical behaviors, whether it is recreating past musical performances or reconstructing musical instruments from the past. A common research approach to an interdisciplinary field is to develop a collaborative research team with diverse specialists who can offer varying perspectives on data and findings. Music archaeology research teams are frequently composed of Musicologists and Archaeologists. However, Psychologists, Organologists, Biologists, Chemists, and Historians, among other professionals and collaborators, can be key in understanding past musical behaviors.[8] For example, a human physiologist can help provide useful insight on the singing and tonal capabilities when analysing excavated human remains.[9] In pursuit of achieving accurate results, it is important that all sources of information and data, however they may be reported or recorded, be treated equally. The information obtained from various scientific approaches can deepen the interpretation of past musical behaviors, sound artefacts, and acoustic spaces .[10] 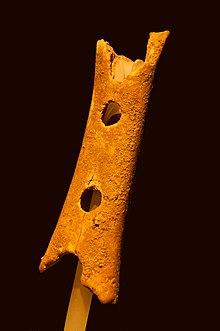 Archaeological researchers date and classify findings from a dig to better understand past behaviors.[11] In music archaeology, dating and classifying are just as important when interpreting data. To answer the question of what is a musical instrument and what is not an instrument is a tricky task and can spark debate. For example, the paleolithic era Divje Babe Flute is considered the world's oldest musical instrument.

The Divje Babe Flute goes by the name of the Neanderthal Flute because of how old it is (over 40,000 years old) and where it was found in Slovenia. While it is possible that Neanderthal had music, there are debates as to whether or not the flute was even constructed by a hominin.[12] [13] Some specialists believe that the holes in the Divje Babe Flute was simply the result of gnawing Cave bear or Ice age hyenas.[14]

From within this history, the subject has proliferated, including work on Prehistoric music. This has focused on the earliest period of music archaeology.

Organology classifies musical instruments and can helps researchers when identifying Artifact (archaeology) that may have been intended to produce sound and Pitch (music).

Archaeoacoustics is the use of methodologies from the field of acoustics and other scientific approaches to musicology, to undertake archaeological study.

The International Study Group on Music Archaeology (ISGMA)[19] has been founded in 1998. The study group is hosted at the Orient Department of the German Archaeological Institute Berlin (DAI, Deutsches Archäologisches Institut, Orient-Abteilung) and the Department for Ethnomusicology at the Ethnological Museum Berlin (Ethnologisches Museum Berlin, SMB SPK, Abteilung Musikethnologie, Medien-Technik und Berliner Phonogramm-Archiv).

MOISA: The International Society for the Study of Greek and Roman Music and its Cultural Heritage is a non-profit association incorporated in Italy in 2007 for the preservation, interpretation, and valorization of ancient Greek and Roman music and musical theory, as well as its cultural heritage to the present day.[20]

The Acoustics and Music of British Prehistory Research Network was funded by the Arts and Humanities Research Council and Engineering and Physical Sciences Research Council, led by Rupert Till and Chris Scarre, as well as Professor Jian Kang of Sheffield University's Department of Architecture. It has a list of researchers working in the field, and links to many other relevant sites.[21]

Retrieved from "http://en.turkcewiki.org/w/index.php?title=Music_archaeology&oldid=990490921"
This website is a mirror of Wikipedia, and is not affiliated with the Wikimedia Foundation.
Categories:
Hidden categories: