In statistics, multivariate adaptive regression splines (MARS) is a form of regression analysis introduced by Jerome H. Friedman in 1991.[1] It is a non-parametric regression technique and can be seen as an extension of linear models that automatically models nonlinearities and interactions between variables.

The term "MARS" is trademarked and licensed to Salford Systems. In order to avoid trademark infringements, many open-source implementations of MARS are called "Earth".[2][3]

This section introduces MARS using a few examples. We start with a set of data: a matrix of input variables x, and a vector of the observed responses y, with a response for each row in x. For example, the data could be:

Here there is only one independent variable, so the x matrix is just a single column. Given these measurements, we would like to build a model which predicts the expected y for a given x. 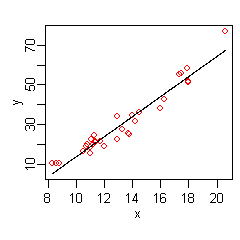 A linear model for the above data is

The hat on the

is estimated from the data. The figure on the right shows a plot of this function: a line giving the predicted

versus x, with the original values of y shown as red dots.

The data at the extremes of x indicates that the relationship between y and x may be non-linear (look at the red dots relative to the regression line at low and high values of x). We thus turn to MARS to automatically build a model taking into account non-linearities. MARS software constructs a model from the given x and y as follows 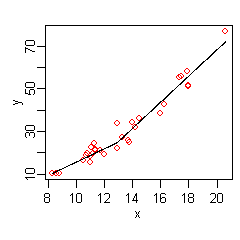 A simple MARS model of the same data

The figure on the right shows a plot of this function: the predicted

versus x, with the original values of y once again shown as red dots. The predicted response is now a better fit to the original y values.

MARS has automatically produced a kink in the predicted y to take into account non-linearity. The kink is produced by hinge functions. The hinge functions are the expressions starting with

). Hinge functions are described in more detail below.

An example MARS expression with multiple variables is 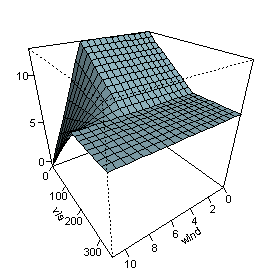 Variable interaction in a MARS model

This expression models air pollution (the ozone level) as a function of the temperature and a few other variables. Note that the last term in the formula (on the last line) incorporates an interaction between

The figure on the right plots the predicted

vary, with the other variables fixed at their median values. The figure shows that wind does not affect the ozone level unless visibility is low. We see that MARS can build quite flexible regression surfaces by combining hinge functions.

MARS builds models of the form

The model is a weighted sum of basis functions

is a constant coefficient. For example, each line in the formula for ozone above is one basis function multiplied by its coefficient.

takes one of the following three forms:

. MARS automatically selects variables and values of those variables for knots of the hinge functions. Examples of such basis functions can be seen in the middle three lines of the ozone formula.

3) a product of two or more hinge functions. These basis functions can model interaction between two or more variables. An example is the last line of the ozone formula. 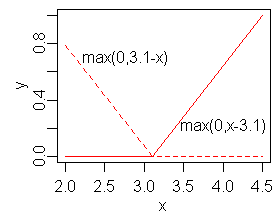 A mirrored pair of hinge functions with a knot at x=3.1

is a constant, called the knot. The figure on the right shows a mirrored pair of hinge functions with a knot at 3.1.

A hinge function is zero for part of its range, so can be used to partition the data into disjoint regions, each of which can be treated independently. Thus for example a mirrored pair of hinge functions in the expression

creates the piecewise linear graph shown for the simple MARS model in the previous section.

Hinge functions are also called ramp, hockey stick, or rectifier functions. Instead of the

notation used in this article, hinge functions are often represented by

MARS builds a model in two phases: the forward and the backward pass. This two-stage approach is the same as that used by recursive partitioning trees.

MARS starts with a model which consists of just the intercept term (which is the mean of the response values).

2) all variables (to select one for the new basis function)

3) all values of each variable (for the knot of the new hinge function).

To calculate the coefficient of each term MARS applies a linear regression over the terms.

The search at each step is done in a brute-force fashion, but a key aspect of MARS is that because of the nature of hinge functions the search can be done relatively quickly using a fast least-squares update technique. Actually, the search is not quite brute force. The search can be sped up with a heuristic that reduces the number of parent terms to consider at each step ("Fast MARS"[4]).

The forward pass usually builds an overfit model. (An overfit model has a good fit to the data used to build the model but will not generalize well to new data.) To build a model with better generalization ability, the backward pass prunes the model. It removes terms one by one, deleting the least effective term at each step until it finds the best submodel. Model subsets are compared using the GCV criterion described below.

The forward pass adds terms in pairs, but the backward pass typically discards one side of the pair and so terms are often not seen in pairs in the final model. A paired hinge can be seen in the equation for

in the first MARS example above; there are no complete pairs retained in the ozone example.

The backward pass uses generalized cross validation (GCV) to compare the performance of model subsets in order to choose the best subset: lower values of GCV are better. The GCV is a form of regularization: it trades off goodness-of-fit against model complexity.

(We want to estimate how well a model performs on new data, not on the training data. Such new data is usually not available at the time of model building, so instead we use GCV to estimate what performance would be on new data. The raw residual sum-of-squares (RSS) on the training data is inadequate for comparing models, because the RSS always increases as MARS terms are dropped. In other words, if the RSS were used to compare models, the backward pass would always choose the largest model—but the largest model typically does not have the best generalization performance.)

The formula for the GCV is

where RSS is the residual sum-of-squares measured on the training data and N is the number of observations (the number of rows in the x matrix).

The EffectiveNumberOfParameters is defined in the MARS context as

where penalty is about 2 or 3 (the MARS software allows the user to preset penalty).

is the number of hinge-function knots, so the formula penalizes the addition of knots. Thus the GCV formula adjusts (i.e. increases) the training RSS to take into account the flexibility of the model. We penalize flexibility because models that are too flexible will model the specific realization of noise in the data instead of just the systematic structure of the data.

Generalized cross-validation is so named because it uses a formula to approximate the error that would be determined by leave-one-out validation. It is just an approximation but works well in practice. GCVs were introduced by Craven and Wahba and extended by Friedman for MARS.

One constraint has already been mentioned: the user can specify the maximum number of terms in the forward pass.

A further constraint can be placed on the forward pass by specifying a maximum allowable degree of interaction. Typically only one or two degrees of interaction are allowed, but higher degrees can be used when the data warrants it. The maximum degree of interaction in the first MARS example above is one (i.e. no interactions or an additive model); in the ozone example it is two.

Other constraints on the forward pass are possible. For example, the user can specify that interactions are allowed only for certain input variables. Such constraints could make sense because of knowledge of the process that generated the data.

Retrieved from "http://en.turkcewiki.org/w/index.php?title=Multivariate_adaptive_regression_spline&oldid=998882621"
This website is a mirror of Wikipedia, and is not affiliated with the Wikimedia Foundation.
Categories:
Hidden categories: