Multi-family residential (also known as multi-dwelling unit or MDU) is a classification of housing where multiple separate housing units for residential inhabitants are contained within one building or several buildings within one complex.[1] Units can be next to each other (side-by-side units), or stacked on top of each other (top and bottom units). A common form is an apartment building. Sometimes units in a multifamily residential building are condominiums, where typically the units are owned individually rather than leased from a single apartment building owner. Many intentional communities incorporate multifamily residences, such as in cohousing projects. 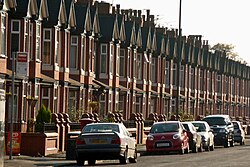 Example of late Victorian terrace in Moss Side, Manchester, UK.

Retrieved from "http://en.turkcewiki.org/w/index.php?title=Multi-family_residential&oldid=933433112"
This website is a mirror of Wikipedia, and is not affiliated with the Wikimedia Foundation.
Categories:
Hidden categories: