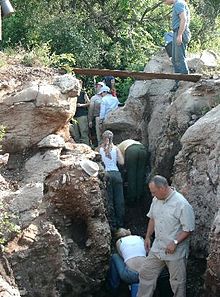 Students digging in the main excavation at Motsetse Cave. Peter Schmid, long-time collaborator is in the foreground.

Motsetsi has been investigated since its discovery by Lee Berger in 1999.[2] Since then a series of part-time excavations have recovered tens of thousands of fossils. Excavations have been conducted at Motsetse by the University of the Witwatersrand and at times in conjunction with Peter Schmid of the University of Zurich. Only a very small part of this site has been excavated.[2]

Of the many thousands of fossils recovered from Motsetsi, no hominid fossils have yet been found. Many very fine fossils of other animals, however, have been discovered including the remains of very well preserved Dinofelis fossils – a type of false saber-toothed cat.[3]

Motsetse is a series of breccia-filled dolomitic caves that formed in a fissure along a geological fault.

Motsetsi has been dated to 1.o to 1.6 million years old based on the animals recovered.[3]

Retrieved from "http://en.turkcewiki.org/w/index.php?title=Motsetsi&oldid=856168816"
This website is a mirror of Wikipedia, and is not affiliated with the Wikimedia Foundation.
Categories:
Hidden categories: