Mothercare plc is a British retailer which specialises in products for expectant mothers and in general merchandise for children up to eight years of age. It is listed on the London Stock Exchange, and is a constituent of the FTSE SmallCap Index.

Mothercare's United Kingdom subsidiary had over 150 stores in 2017, but by 2019 their number had been reduced to 79, and in November 2019 the subsidiary was placed into administration which led to closure of all the stores. The parent company continues to supply franchisees in other countries. 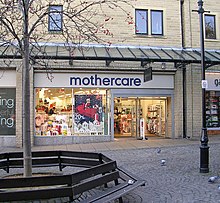 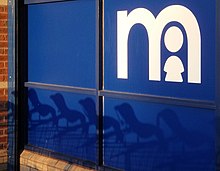 Child seats on shopping trolleys cast their shadows on the front of the Mothercare at Wren Park, Torquay

The company was founded by Selim Zilkha and Sir James Goldsmith in 1961.[2] It was first listed on the London Stock Exchange in 1972.[2]

In June 2007, Mothercare bought Early Learning Centre (ELC) for £85 million.[4] In October 2007, it launched Gurgle, a pregnancy and parenting social networking website.[5] In November 2009, Mothercare acquired the 50% of Gurgle that it did not already own.[6]

In July 2010, Mothercare bought the trademark and brand of Blooming Marvellous, a privately owned rival.[7] In May 2011, it was reported that the company would undergo a major restructure in its retail operations, resulting in an undisclosed number of ELC stores moving into neighbouring Mothercare stores to lower costs.

In May 2018, it was confirmed that Mothercare would close 60 stores in the United Kingdom under company voluntary arrangement schemes affecting three subsidiaries: Mothercare UK Limited, Early Learning Centre Limited and Childrens World Limited.[1] The Early Learning Centre business – which operated in 80 UK stores and 400 overseas franchises – was sold to the Entertainer group in March 2019.[8]

During the 2019 financial year, the company's Watford headquarters was sold in a leaseback transaction which raised £14.5M.[1] In July 2019, the company said it was planning to spin off its UK retail business due to decreased sales. The company reported that UK store sales fell down by 23.2%, while online sales in the UK were down by 12.1%. The company recorded a worldwide sales drop of 9.4%.[9]

In November 2019, the company put Mothercare UK (and Mothercare Business Services) into administration.[10] This means all the UK shops and the UK website closed soon after.[11] Mothercare International still trades profitably.

The company operates online, on high streets and in out-of-town retail parks. In November 2009 it had over 1,060 stores worldwide, of which 389 were in the United Kingdom, and 671 were in 38 other countries.[12]

By 2017, Mothercare operated over 1,302 stores worldwide, with 152 stores in the United Kingdom. Following a UK company voluntary arrangement in 2018, the company agreed to close 60 stores. In January 2019, Mothercare announced that its closure programme was ahead of schedule and the group was on course to have 79 shops by the end of March 2019.[13]

Following the closure of the UK business, from mid-2020 some Mothercare-branded products will be sold by Boots, both online and in stores.[14]

In September 2014, Mothercare made a nine-for-ten rights issue at 125p per share, a discount of 34.2 per cent to the then current share price, in order to raise £95m net of expenses, to be used to pay off £40 million in loans.[15] By March 2018, Mothercare were in talks with the banks to waive their covenants, causing the company's share price to fall by one third to 22 pence per share. Mothercare has a pension shortfall of £80m.[16]

On 4 November 2019, Mothercare announced it was appointing administrators for its UK operations of 79 stores, placing 2,500 jobs at risk. The company, which suffered a loss of £36.3m during 2018–19, stated the decision came after a review made clear that the business would not return to profitability.[17] On 5 November, it was announced by the administrators that there would be a phased closure of all UK stores and its headquarters.[11]

In Ukraine, the Mothercare brand is represented by MBGroup LLC. Ukrainian Mothercare stores are the same as their counterparts in the UK, with British representatives carefully monitoring the quality of the stores and their staff. The flagship store was opened in August 2004, in Kiev's premier shopping mall, Globus; it is the largest Mothercare store in Ukraine, both in terms of size and range of products. After rapid expansion, the Mothercare brand is represented in Ukraine by over twenty stores in Kiev, and several additional stores in Lviv, Dnipropetrovsk, Kharkiv, Odessa, Donetsk, Vinnytsia and Zaporizhya.

In 1983, M.H. Alshaya Co. began its first franchise operation with the Mothercare brand in Kuwait, which was also its first international store. Alshaya operates Mothercare franchises[18] in the Middle East, North Africa, central and eastern Europe and Russia.[19]

In Singapore, the Mothercare brand is represented by Kim Hin International Pte. Ltd. which began in 1984[20] by its founder and current chairman, Pang Kim Hin.[21] Subsequently, the company expanded to include their Malaysian subsidiary Kim Hin Joo (Malaysia) Sdn. Bhd. in 1987 and Mother and Child Limited Hong Kong in 1992. The flagship store for Mothercare Malaysia is located at Suria KLCC.

In Brunei, Mothercare is owned by the Growtech Marketing Group, and has been operating since 1996. There are currently three stores in Brunei, two situated at the Brunei-Muara District and one at the Kuala Belait District. Mothercare Brunei's flagship store is located at Kiulap.

Retrieved from "http://en.turkcewiki.org/w/index.php?title=Mothercare&oldid=971282713"
This website is a mirror of Wikipedia, and is not affiliated with the Wikimedia Foundation.
Categories:
Hidden categories: