The Piano Sonata No. 14 in C♯ minor "Quasi una fantasia", Op. 27, No. 2, popularly known as the Moonlight Sonata, is a piano sonata by Ludwig van Beethoven. It was completed in 1801 and dedicated in 1802 to his pupil, Countess Giulietta Guicciardi.[2]

The piece is one of Beethoven's most popular compositions for the piano, and it was a popular favorite even in his own day.[3] Beethoven wrote the Moonlight Sonata in his early thirties, after he had finished with some commissioned work; there is no evidence that he was commissioned to write this sonata.[3]

The first edition of the score is headed Sonata quasi una fantasia, a title this work shares with its companion piece, Op. 27, No. 1.[4] Grove Music Online translates the Italian title as "sonata in the manner of a fantasy".[5] The title could also be interpreted to imply "...as though improvised".[6]

The name "Moonlight Sonata" comes from remarks made by the German music critic and poet Ludwig Rellstab. In 1832, five years after Beethoven's death, Rellstab likened the effect of the first movement to that of moonlight shining upon Lake Lucerne.[7] Within ten years, the name "Moonlight Sonata" ("Mondscheinsonate" in German) was being used in German[8] and English[9] publications. Later in the nineteenth century, the sonata was universally known by that name.[10]

Many critics have objected to the subjective, romantic nature of the title "Moonlight", which has at times been called "a misleading approach to a movement with almost the character of a funeral march"[11] and "absurd".[12] Other critics have approved of the sobriquet, finding it evocative[13] or in line with their own interpretation of the work.[14] Gramophone founder Compton Mackenzie found the title "harmless", remarking that "it is silly for austere critics to work themselves up into a state of almost hysterical rage with poor Rellstab", and adding, "what these austere critics fail to grasp is that unless the general public had responded to the suggestion of moonlight in this music Rellstab's remark would long ago have been forgotten."[15]

Although no direct testimony exists as to the specific reasons why Beethoven decided to title both the Op. 27 works as Sonata quasi una fantasia, it may be significant that the layout of the present work does not follow the traditional movement arrangement in the Classical period of fast–slow–[fast]–fast. Instead, the sonata possesses an end-weighted trajectory, with the rapid music held off until the third movement. In his analysis, German critic Paul Bekker states: "The opening sonata-allegro movement gave the work a definite character from the beginning... which succeeding movements could supplement but not change. Beethoven rebelled against this determinative quality in the first movement. He wanted a prelude, an introduction, not a proposition.”[16]

The sonata consists of three movements:

The first movement,[17] in C♯ minor, is written in modified sonata-allegro form.[18] The movement opens with an octave in the left hand and a triplet figuration in the right. A melody that Hector Berlioz called a "lamentation",[citation needed] mostly by the left hand, is played against an accompanying ostinato triplet rhythm, simultaneously played by the right hand. The movement is played pianissimo or "very quietly", and the loudest it gets is piano or "quietly".

The adagio sostenuto has made a powerful impression on many listeners; for instance, Berlioz said of it that it "is one of those poems that human language does not know how to qualify".[19] Beethoven's student Carl Czerny called it "a nocturnal scene, in which a mournful ghostly voice sounds from the distance".[3] The movement was very popular in Beethoven's day, to the point of exasperating the composer himself, who remarked to Czerny, "Surely I've written better things."[20][21]

The second movement is a relatively conventional scherzo and trio with the first section of the Scherzo not repeated. It is a seeming moment of relative calm written in D♭ major, the more easily notated enharmonic equivalent of C♯ major, the parallel major of the first movement's key, C♯ minor. Franz Liszt is said to have described the second movement as "a flower between two chasms".[22] The slight majority of the movement is in piano, but a handful of sforzandos and forte-pianos helps to maintain the movement's cheerful disposition.

The stormy final movement (C♯ minor), in sonata form, is the weightiest of the three, reflecting an experiment of Beethoven's (also carried out in the companion sonata Opus 27, No. 1 and later on in Opus 101), namely, placement of the most important movement of the sonata last. The writing has many fast arpeggios/broken chords, strongly accented notes, and fast alberti bass sequences that fall both into the right and left hands at various times. An effective performance of this movement demands lively and skillful playing, great stamina, and is significantly more demanding technically than the 1st and 2nd movements.

Of the final movement, Charles Rosen has written "it is the most unbridled in its representation of emotion. Even today, two hundred years later, its ferocity is astonishing."[19]

Beethoven's heavy use of sforzando notes, together with just a few strategically located fortissimo passages, creates the sense of a very powerful sound in spite of the predominance of piano markings throughout. 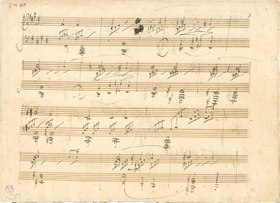 Autograph score; the first page has evidently been lost

At the opening of the first movement, Beethoven included the following direction in Italian: "Si deve suonare tutto questo pezzo delicatissimamente e senza sordino" ("This whole piece ought to be played with the utmost delicacy and without damper[s]"[23]). The way this is accomplished (both on today's pianos and on those of Beethoven's day) is to depress the sustain pedal throughout the movement – or at least to make use of the pedal throughout, but re-applying it as the harmony changes.

The modern piano has a much longer sustain time than the instruments of Beethoven's time, so that a steady application of the sustain pedal creates a dissonant sound. In contrast, performers who employ a historically based instrument (either a restored old piano or a modern instrument built on historical principles) are more able to follow Beethoven's direction literally.

For performance on the modern piano, several options have been put forth.

The C♯ minor sonata, particularly the third movement, is held to have been the inspiration for Frédéric Chopin's Fantaisie-Impromptu, and that the Fantaisie-Impromptu was actually a tribute to Beethoven.[26] It manifests the key relationships of the sonata's three movements, chord structures, and even shares some passages. Ernst Oster writes: "With the aid of the Fantaisie-Impromptu we can at least recognize what particular features of the C♯ minor Sonata struck fire in Chopin. We can actually regard Chopin as our teacher as he points to the coda and says, 'Look here, this is great. Take heed of this example!' ... The Fantaisie-Impromptu is perhaps the only instance where one genius discloses to us – if only by means of a composition of his own – what he actually hears in the work of another genius."[27]

Carl Bohm composed a piece for violin and piano called "Meditation", Op. 296, in which he adds a violin melody over the unaltered first movement of Beethoven's sonata.[28]

Retrieved from "http://en.turkcewiki.org/w/index.php?title=Piano_Sonata_No._14_(Beethoven)&oldid=963523971"
This website is a mirror of Wikipedia, and is not affiliated with the Wikimedia Foundation.
Categories:
Hidden categories: