The Agreement Governing the Activities of States on the Moon and Other Celestial Bodies,[3][4] better known as the Moon Treaty or Moon Agreement, is a multilateral treaty that turns jurisdiction of all celestial bodies (including the orbits around such bodies) over to the participant countries. Thus, all activities would conform to international law, including the United Nations Charter.

It has not been ratified by any state that engages in self-launched human spaceflight or has plans to do so[needs update] (e.g. the United States, the larger part of the member states of the European Space Agency, Russia (former Soviet Union), People's Republic of China and Japan) since its creation in 1979, and thus it has little to no relevancy in international law.[5] As of January 2019, 18 states are parties to the treaty.[1]

After the 1967 non-armament Outer Space Treaty was signed, it was followed in 1968 with the United Nations convened UNISPACE, the United Nations Conference on the Exploration and Peaceful Uses of Outer Space. It was the first of a series of UN-sponsored conferences intended to create an international framework of laws to guide humanity's use of outer space resources.[6] However, the efforts failed.[7]

After ten more years of negotiations, the Moon Treaty was created in 1979 as a framework of laws to develop a regime of detailed procedures, and as such, it remained imprecise: its Article 11.5 states that the exploitation of the natural shall be governed by an international regime that would establish the appropriate procedures. In order to define this regime or laws, a series of UN-sponsored conferences took place, but brought no consensus. The continuing disagreement is based mainly over the meaning of "Common Heritage of Mankind" and on the rights of each country to the natural resources of the Moon.[6]

On July 29 and 31, 1980, the Subcommittee on Science, Technology and Space, which was a part of the Senate Committee on Commerce, Science and Transportation held hearings on the Moon Treaty. S. Neil Hosenball was one of the supporters of the treaty, and he attempted to compare the Moon Treaty to mining rights within the United States. Hosenball was unsuccessful in his attempt to convince the committee that the United States should ratify the Moon Treaty. The opposition, led by Leigh Ratiner of the L-5 Society, stated that the Moon Treaty was opposed to free enterprise and private property rights. Ratiner provided a potential solution to the Moon Treaty, and suggested that there should be legal claims to the Moon and "there should be a system to register such claims. By the way, I'm not speaking of claims to territory...I don't think it's necessary for us to deal with the issue of whether one can make a claim to the land itself, as long as one has the exclusive right to use it."[8]

The last effort culminated in June 2018 after eight years of negotiations,[7] when the United Nations Committee on the Peaceful Uses of Outer Space (COPUOS) held a high-level meeting that tried to produce a consensus on a framework of laws for the sustainable development of outer space, but it also failed to do so[7] when S. Neil Hosenball, who is the NASA General Counsel and chief US negotiator for the Moon Treaty, decided that negotiation of the rules of the international regime should be delayed until the feasibility of exploitation of lunar resources has been established.[9]

If rights to economic benefits cannot be guaranteed, there will be little if any private investment.[10] So seeking clearer regulatory conditions and guidelines,[11] private companies in the US prompted the US government and legalized space mining in 2015 by introducing the US Commercial Space Launch Competitiveness Act of 2015.[12] Similar national legislations legalizing extraterrestrial appropriation of resources are now being replicated by other nations, including Luxembourg, Japan, China, India and Russia.[13] While the "national" treaty explicitly allows commercial mining, other experts argue that these new national laws are inconsistent with the Moon Treaty and customary international law.[13][14][15][16] Other experts affirm that the Moon Treaty does allow commercial mining, after creating the needed international regulations.[7] This has created a controversy on claims and on mining rights for profit.[16][11][7]

It was noted that since the 1967 Outer Space Treaty was signed, technologies and society evolved, requiring a redefinition of the rights and responsibilities of citizens and governments alike in the use and development of outer space.[6] The primary stated objective of the 1979 Moon Treaty is "to provide the necessary legal principles for governing the behavior of states, international organizations, and individuals who explore celestial bodies other than Earth, as well as administration of the resources that exploration may yield."[6] It proposed to do so by having the state parties produce an "international regime" that would establish the appropriate procedures (Article 11.5).[6][7] 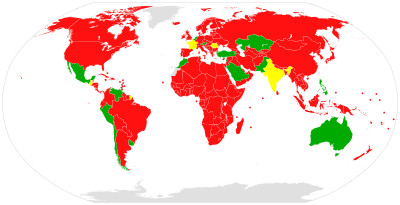 The treaty was finalized in 1979 and, after satisfying the condition requiring 5 ratifying states, it entered into force for the ratifying parties in 1984. As of January 2019, 18 states are parties to the treaty,[1] seven of which ratified the agreement and the rest acceded.[1][17] Four additional states have signed but not ratified the treaty.[1][17] The L5 Society and others successfully opposed ratification of the treaty by the United States Senate.[18][19]

The Moon Treaty proposes to establish an "international regime" or "framework of laws" that apply to the Moon and to other celestial bodies within the Solar System, including orbits around or other trajectories to or around them.[3][7]

The Moon Treaty lays several provisions outlined in 21 articles.[3] In Article 1, the treaty makes a declaration that the Moon should be used for the benefit of all states and all peoples of the international community.[20] It reiterates that lunar resources are "not subject to national appropriation by claim of sovereignty, by means of use or occupation, or by any other means."[20] It also expresses a desire to prevent the Moon from becoming a source of international conflict, so that the resources should be used exclusively for peaceful purposes. To those ends, the treaty lays several provisions, and some of these are paraphrased below:[3] 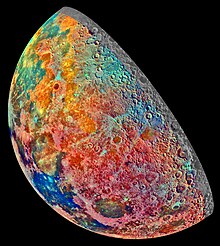 An artificially colored mosaic constructed from a series of 53 images taken through three spectral filters by Galileo's imaging system as the spacecraft flew over the northern regions of the Moon on 7 December 1992. The colors indicate different materials.

When compared with the Outer Space Treaty, it reiterates most provisions, and adds two new concepts in order to address the exploitation of natural resources in outer space: to apply the concept of 'common heritage of mankind' to outer space activities, and to have the participating countries produce a regime that lays the appropriate procedures for orderly mining.[6] Multiple conferences produced no consensus on these two items.

The current imprecision of the agreement generated various interpretations,[20][22] and it is cited as the main reason it was not ratified by most parties.[22][23] The agreement was ratified by few countries, which has been described as a failure [19] and without fruition.[6] Only one country (India) with independent spaceflight capabilities has signed (but not ratified) the treaty. An expert in space law and economics thinks that the treaty would need to offer adequate provisions against any one company acquiring a monopoly position in the world minerals market, while avoiding "the socialization of the Moon."[24] Another expert commends the treaty as a germinal legal framework for developing the needed laws, rather than a finished set of detailed laws.[25]

While the treaty reiterates the prohibition of sovereignty of "any part" of space, it proposes that the exploitation of resources shall be governed by an international regime (Article 11.5), but there has been no consensus establishing these laws.[22] S. Neil Hosenball, who is the NASA General Counsel and chief US negotiator for the Moon Treaty, decided in 2018 that negotiation of the rules of this international regime should be delayed until the feasibility of exploitation of lunar resources has been established.[9] A legal expert stated in 2011 that the international issues "would probably be settled during the normal course of space exploration."[6]

In 2020, U.S. President Donald Trump signed an executive order called "Encouraging International Support for the Recovery and Use of Space Resources." The order emphasizes that "the United States does not view outer space as a 'global commons" and calls the Moon Agreement a "a failed attempt at constraining free enterprise."[26][27]

Retrieved from "http://en.turkcewiki.org/w/index.php?title=Moon_Treaty&oldid=988497833"
This website is a mirror of Wikipedia, and is not affiliated with the Wikimedia Foundation.
Categories:
Hidden categories: