Monticello claims to be "The Houseboat Capital of the World" as there are numerous houseboat manufacturers in the city. The city is located along Lake Cumberland. Its economy is built on serving the recreational and tourist traffic to the lake.

Monticello is located near the center of Wayne County, along Elk Creek, a tributary of Beaver Creek, which flows westward into Lake Cumberland.[7] State highways 92, 90, and 167, were constructed to intersect at the county seat. 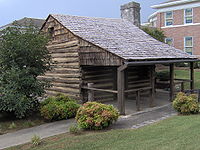 Monticello was designated as the county seat when the Wayne County was formed in 1800. The first Wayne County clerk, Micah Taul, named the town after the plantation and home of Virginia statesman Thomas Jefferson, who was elected President of the United States that year. Joshua Jones, a surveyor and Revolutionary War veteran, laid out the town on thirteen acres owned by William Beard. By 1810, the population numbered twenty-seven.

In the late 1800s, oil was discovered in Wayne County, creating an economic boost. Drilling began in these local oil fields in the 1880s and was renewed in 1921-22.[8]

Electricity was introduced to the city in 1905. City water was installed in 1929. Manufacturing dominated the economy from the late 1950s and 1960s until the late 20th and early 21st century.[9]

The first recorded school in Wayne County was opened about 1800 by Robert Ferrill, a well-educated wheelwright who had a few good books. Monticello’s first school was opened in 1807 by Rodes Garth, who taught “Roman history, the Scriptures, orthography, and pronunciation.” In 1819, Yale graduate John S. Frisbie began a school with Michael Huffaker as the first teacher of record. The Monticello Academy was established in 1830 with John Lankford as the headmaster, followed by Professor Mullins, and later William Burton.

In 1843, under the guidance of Commissioners Micajah Phillips, John Rousseau, Martin Beaty, and Francis Goddard, the county voted and ratified to organize into common school districts.

By 1842 there were 16 school houses in Wayne County, three listed within several miles of Monticello.

Teachers at these schools before the Civil War include Amanda McGee, William and Thomas Simpson, Joseph Ballou, and Marcellus Baugh.

The first school superintendent of Wayne County was Robert McBeath, a “member of a family noted for their intellectual qualities.” His son, Tom McBeath, moved on to be President of Florida State University.

In 1866, following the Civil War, the Kendrick Academy opened in Monticello with Milton Elliott as principal. Teachers in Monticello in the 1860s and 70s include Marion Huffaker, Marshall Stone, and Ala Shearer. Ones in the 1880s and 90s include Lucy and Amanda Taylor, Sallie and Eula Kendrick, Emma Kelley, Fount Cooper, William Sandusky, Tobias Huffaker, and Mollie Denny, who became the Wayne county superintendent.

In 1879, a girls' school was opened by Roxie Buchanan, followed by William Bradshaw, and in 1885 W.T. Chaffin opened Classical High School with teachers T. Leigh Thompson, T. C. Job, and Georgia Brock; and in about 1890 added kindergarten and primary schools with teachers Ms. Oakley and Graves. Successive principals at the school up until the close of the nineteenth century were W. T. Chafin, T. Leigh Thompson, Professor H. C. Jones, Hayden Grubbs, Professor Chafin again, and finally Mr. Ballard.[14]

From 1905 until 2013 Monticello had Monticello Independent Schools, its own school district independent of the surrounding Wayne County Schools.[15]

Monticello has a lending library, the Wayne County Public Library.[16]

Retrieved from "http://en.turkcewiki.org/w/index.php?title=Monticello,_Kentucky&oldid=1020611144"
This website is a mirror of Wikipedia, and is not affiliated with the Wikimedia Foundation.
Categories:
Hidden categories: