The Modigliani–Miller theorem (of Franco Modigliani, Merton Miller) is an influential element of economic theory; it forms the basis for modern thinking on capital structure.[1] The basic theorem states that in the absence of taxes, bankruptcy costs, agency costs, and asymmetric information, and in an efficient market, the value of a firm is unaffected by how that firm is financed.[2] Since the value of the firm depends neither on its dividend policy nor its decision to raise capital by issuing stock or selling debt, the Modigliani–Miller theorem is often called the capital structure irrelevance principle.

The key Modigliani-Miller theorem was developed in a world without taxes. However, if we move to a world where there are taxes, when the interest on debt is tax-deductible, and ignoring other frictions, the value of the company increases in proportion to the amount of debt used.[3] The additional value equals the total discounted value of future taxes saved by issuing debt instead of equity.

Modigliani was awarded the 1985 Nobel Prize in Economics for this and other contributions.

Miller was a professor at the University of Chicago when he was awarded the 1990 Nobel Prize in Economics, along with Harry Markowitz and William F. Sharpe, for their "work in the theory of financial economics", with Miller specifically cited for "fundamental contributions to the theory of corporate finance".

Miller and Modigliani derived and published their theorem when they were both professors at the Graduate School of Industrial Administration (GSIA) of Carnegie Mellon University. Despite limited prior experience in corporate finance, Miller and Modigliani were assigned to teach the subject to current business students. Finding the published material on the topic lacking, the professors created the theorem based on their own research[citation needed]. The result of this was the article in the American Economic Review and what has later been known as the M&M theorem.

Miller and Modigliani published a number of follow-up papers discussing some of these issues. The theorem was first proposed by F. Modigliani and M. Miller in 1958.

Consider two firms which are identical except for their financial structures. The first (Firm U) is unlevered: that is, it is financed by equity only. The other (Firm L) is levered: it is financed partly by equity, and partly by debt. The Modigliani–Miller theorem states that the value of the two firms is the same.

is the value of an unlevered firm = price of buying a firm composed only of equity, and

is the value of a levered firm = price of buying a firm that is composed of some mix of debt and equity. Another word for levered is geared, which has the same meaning.[4]

To see why this should be true, suppose an investor is considering buying one of the two firms, U or L. Instead of purchasing the shares of the levered firm L, he could purchase the shares of firm U and borrow the same amount of money B that firm L does. The eventual returns to either of these investments would be the same. Therefore the price of L must be the same as the price of U minus the money borrowed B, which is the value of L's debt.

This discussion also clarifies the role of some of the theorem's assumptions. We have implicitly assumed that the investor's cost of borrowing money is the same as that of the firm, which need not be true in the presence of asymmetric information, in the absence of efficient markets, or if the investor has a different risk profile than the firm. 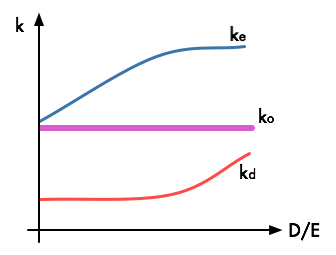 A higher debt-to-equity ratio leads to a higher required return on equity, because of the higher risk involved for equity-holders in a company with debt. The formula is derived from the theory of weighted average cost of capital (WACC).

These propositions are true under the following assumptions:

This means that there are advantages for firms to be levered, since corporations can deduct interest payments. Therefore leverage lowers tax payments. Dividend payments are non-deductible.

The same relationship as earlier described stating that the cost of equity rises with leverage, because the risk to equity rises, still holds. The formula, however, has implications for the difference with the WACC. Their second attempt on capital structure included taxes has identified that as the level of gearing increases by replacing equity with cheap debt the level of the WACC drops and an optimal capital structure does indeed exist at a point where debt is 100%.

The following assumptions are made in the propositions with taxes:

Retrieved from "http://en.turkcewiki.org/w/index.php?title=Modigliani–Miller_theorem&oldid=940945995"
This website is a mirror of Wikipedia, and is not affiliated with the Wikimedia Foundation.
Categories:
Hidden categories: