Jump to navigation Jump to search
Not to be confused with Compagnie de l'Occident. 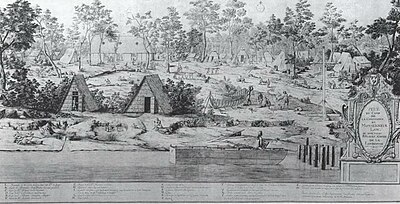 View of the camp of John Law at Biloxi, December 1720

The Mississippi Company (French: Compagnie du Mississippi; founded 1684, named the Company of the West from 1717, and the Company of the Indies from 1719[1]) was a corporation holding a business monopoly in French colonies in North America and the West Indies. When land development and speculation in the region became frenzied and detached from economic reality, the Mississippi bubble became one of the earliest examples of an economic bubble. 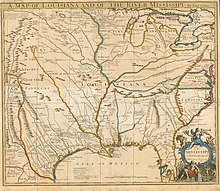 John Senex's map (1721), with a dedication to William Law, probably a relative of John Law (possibly his brother), who bore much of the blame for the financial panic known as the "Mississippi Bubble".

In May 1716, the Banque Générale Privée ("General Private Bank"), which developed the use of paper money, was set up by John Law.[2][3][4] It was a private bank, but three quarters of the capital consisted of government bills and government-accepted notes. In August 1717, he bought the Mississippi Company to help the French colony in Louisiana. In the same year Law conceived a joint-stock trading company called the Compagnie d'Occident (The Mississippi Company, or, literally, "Company of [the] West"). Law was named the Chief Director of this new company, which was granted a trade monopoly of the West Indies and North America by the French government.[5]

The bank became the Banque Royale (Royal Bank) in 1718, meaning the notes were guaranteed by the king, Louis XV of France. The company absorbed the Compagnie des Indes Orientales ("Company of the East Indies"), the Compagnie de Chine ("Company of China"), and other rival trading companies and became the Compagnie Perpetuelle des Indes on 23 May 1719 with a monopoly of French commerce on all the seas. Simultaneously, the bank began issuing more notes than it could represent in coinage; this led to a currency devaluation, which was eventually followed by a bank run when the value of the new paper currency was halved.[6] 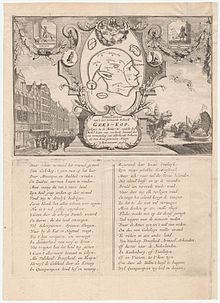 Representation of the very famous island of Mad-head, lying in the sea of shares, discovered by Mr. Law-rens, and inhabited by a collection of all kinds of people, to whom are given the general name shareholders, 1720.

Louis XIV's long reign and wars had nearly bankrupted the French monarchy. Rather than reduce spending, the Regency of Louis XV of France endorsed the monetary theories of Scottish financier John Law. In 1716, Law was given a charter for the Banque Royale under which the national debt was assigned to the bank in return for extraordinary privileges. The key to the Banque Royale agreement was that the national debt would be paid from revenues derived from opening the Mississippi Valley. The Bank was tied to other ventures of Law—the Company of the West and the Companies of the Indies. All were known as the Mississippi Company. The Mississippi Company had a monopoly on trade and mineral wealth. The Company boomed on paper. Law was given the title Duc d'Arkansas. Bernard de la Harpe and his party left New Orleans in 1719 to explore the Red River. In 1721, he explored the Arkansas River. At the Yazoo settlements in Mississippi he was joined by Jean Benjamin who became the scientist for the expedition.

In 1718, there were only 700 Europeans in Louisiana. The Mississippi Company arranged ships to move 800 more, who landed in Louisiana in 1718, doubling the European population. John Law encouraged Germans, particularly Germans of the Alsatian region who had recently fallen under French rule, and the Swiss to emigrate. They give their name to the regions of the Côte des Allemands and the Lac des Allemands in Louisiana.

Prisoners were set free in Paris in September 1719 onwards, under the condition that they marry prostitutes and go with them to Louisiana. The newly married couples were chained together and taken to the port of embarkation. In May 1720, after complaints from the Mississippi Company and the concessioners about this class of French immigrants, the French government prohibited such deportations. However, there was a third shipment of prisoners in 1721.[7]

Law exaggerated the wealth of Louisiana with an effective marketing scheme, which led to wild speculation on the shares of the company in 1719. The scheme promised success for the Mississippi Company by combining investor fervor and the wealth of its Louisiana prospects into a sustainable, joint-stock, trading company. The popularity of company shares were such that they sparked a need for more paper bank notes, and when shares generated profits the investors were paid out in paper bank notes.[8] In 1720, the bank and company were merged and Law was appointed by Philippe II, Duke of Orleans, then Regent for Louis XV, to be Comptroller General of Finances[9] to attract capital. Law's pioneering note-issuing bank thrived until the French government was forced to admit that the number of paper notes being issued by the Banque Royale exceeded the value of the amount of metal coinage it held.[10]

The "bubble" burst at the end of 1720,[11] when opponents of the financier attempted to convert their notes into specie en masse, forcing the bank to stop payment on its paper notes.[12] By the end of 1720 Philippe d'Orléans had dismissed Law from his positions. Law then fled France for Brussels, eventually moving on to Venice, where he lived off his gambling. He was buried in the church San Moisè in Venice.[6]

Retrieved from "http://en.turkcewiki.org/w/index.php?title=Mississippi_Company&oldid=936338754"
This website is a mirror of Wikipedia, and is not affiliated with the Wikimedia Foundation.
Categories:
Hidden categories: