A minibike is a two wheeled, off-highway recreational vehicle popularized in the 1960's and 1970's, but available continuously from a wide variety of manufacturers since 1959. Traditionally, minibikes have a four-stroke, horizontal crankshaft engine, single or two-speed Centrifugal clutch transmission with chain final drive, 4" or 6" wheels and a low frame/seat height with elevated handlebars.[1] Commercially available minibikes are usually equip with engines commonly found elsewhere on utilitarian equipment. 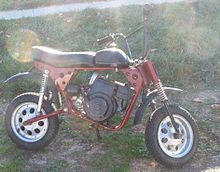 A modern variation of a minibike.

While the minibike had precursors in machines such as the Doodle Bug and Cushman Scooters, which share smaller wheels, tubular-steel frames and air-cooled, single-cylinder engines, those vehicles had larger seat heights and lighting that allow them to be registered for road use as scooters. In the 1950s, minibikes were hand-made by enthusiasts. Antidotally, these were first popularly used as pit bikes, for drag racers to travel in the staging-areas during races. One of these "Pit bikes" was received by brothers Ray, Larry and Regis Michrina in early 1959 from local car dealer and racer Troy Ruttman.[2]

The Michrina Brothers would create the first commercial minibikes by drawing inspiration from this Pit Bike, delivering 3 prototypes to Troy Ruttman to sell through his dealership. The Michrina brothers are credited with creating the "Minibike", but failed to patent the design or trademark the term when founding their Lil Indian brand in 1959. [3]. Lil Indian would go on to manufacture tens-of-thousands of Minibikes in their 40+ years. From the mid 1960's into the 1970's, the popularity of said machines would see over a hundred manufacturers attempt to market machines, an inexpensive venture due to the absence of patents. So popular and simple was the design, the June of 1967 Popular Mechanics magazine included an article with plans that could be made with proper tools and supplies.[4]

As the market for minibikes developed, a variety of cottage and major industries offered models, including Arctic Cat, Rupp, Taco, Heath, Gilson, and Fox. Traditional motorcycle manufacturers also released models inspired by aspects of minibikes, most famously Honda with the Z50A[5], though this style is affectionately known as a Monkey Bike, a slang-term due to its street-legal demographic requiring a seminarian riding position.[6] Sales peaked in the 1973, with 140,000 units between manufacturers.[7]. By 1976 the bubble had burst and less than ten manufactures continued to make Mini Bikes. Popularity declined steadily, but leveled off in the early 1990's. Currently, machines can still be found at various retailers for less than $600.[8]

While US laws vary by state, Minibikes are unlawful for use on public through-ways due to lack of safety equipment, lights, and their diminutive size causing visibility issues.[9]. In 1977, the CPSC was unsuccessfully lobbied to add federal regulation to Minibikes, so while Minibikes cannot be operated on Public Roads, they can operate in areas legal for use of other recreational vehicles, provided they have the proper equipment utilized at the time of sale, most notably a spark arrestor for the exhaust.[10]In Canada, Minibikes do not meet Federal safety standards for use on public roads.In the UK, it is not legal for Minibikes to be used on public roads or land. Further, it is not legal to use Minibikes on property in proximity to a population if cited for Noise Pollution.[11]

Retrieved from "http://en.turkcewiki.org/w/index.php?title=Minibike&oldid=957449163"
This website is a mirror of Wikipedia, and is not affiliated with the Wikimedia Foundation.
Categories:
Hidden categories: