Jump to navigation Jump to search
2000 meeting among world leaders 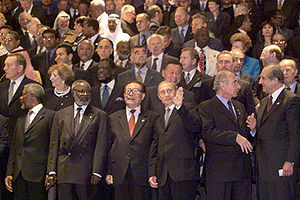 Heads of State at the Summit.

The General Assembly Resolution that decided upon this summit stated that it attempted to seize "a unique and symbolically compelling moment to articulate and affirm an animating vision for the United Nations."[5]

In this summit, 189 member states of the United Nations agreed to help citizens in the world's poorest countries to achieve a better life by the year 2015. The framework for this progress is outlined in the Millennium Development Goals. Also known as the MDGs, these goals were derived from the Millennium Declaration.[6] This summit was focused on various global issues, such as poverty, AIDS, and how to share the benefits of globalisation more fairly.[7]

See also: List of delegates to the Millennium Summit

On 5 September 2000, delegates around the world began to travel to the United States for the Millennium Summit. The delegation of North Korea was inspected at Frankfurt International Airport by American airline officials during a stop in Germany.[8] American Airlines personnel demanded that the members of the delegation and their belongings be searched. In response to these demands, the North Korean government withdrew its delegation from the Summit. As diplomats, the officials should not have been subject to search.[9]

Over 150 world leaders participated in the discussion, including 100 heads of state, 47 heads of government, three crown princes, five Vice presidents, three Deputy Prime Ministers, and 8,000 other delegates.[10] The Group of 77 was also present to discuss the changes the United Nations faced at the turn of the 21st century.

On Wednesday, 6 September 2000, the Millennium Summit was opened by Kofi Annan, the Secretary-General of the United Nations. Before moving into the summit, Annan called for a minute's silence for four United Nations workers who were killed in West Timor by pro-Indonesian militiamen. U.S. President Bill Clinton and Russian President Vladimir Putin delivered a plea for world peace and disarmament. Sixty-three other speakers spoke for five minutes each. In the duration of the summit, Bill Clinton held separate meetings with Israel's Prime Minister Ehud Barak and Palestinian leader Yaser Arafat, calling on them to reach a peace agreement among the two nations,[3] although no actual progress was made in doing so. Both sides were still committed to reaching such an agreement, however.[7]

Israeli Prime Minister Ehud Barak called for Yaser Arafat, the Palestinian leader, to reach an agreement with him. During the summit, Barak stated:

"The opportunity for peace in the Middle East is now at hand and must not be missed. Jerusalem, the eternal capital of Israel, now calls for a peace of honour, of courage and of brotherhood. We recognise that Jerusalem is also sacred to Muslims and Christians around the world and cherished by our Palestinian neighbours. A true peace will reflect all these bonds."[7]

Yaser Arafat responded to Ehud Barak's comments by saying the Palestinians have already contributed to the peace efforts by making significant sacrifices towards a compromise between the two countries.[7]

Prime Minister of the United Kingdom Tony Blair urged the overhaul of the United Nations' peacekeeping forces. He called for the creation for a military staff to supervise the operations.[12] American President Bill Clinton also stressed the importance of these peacekeeping missions.[13]

The United Nations summit for the adoption of the Post-2015 Development Agenda will be held from 25 to 27 September 2015, in New York and convened as a high-level plenary meeting of the General Assembly.[16] Proposed 6 themes for Interactive Dialogues are:

Retrieved from "http://en.turkcewiki.org/w/index.php?title=Millennium_Summit&oldid=995858649"
This website is a mirror of Wikipedia, and is not affiliated with the Wikimedia Foundation.
Categories:
Hidden categories: