Jump to navigation Jump to search
Mathematical function defining distance
Not to be confused with Measure (mathematics). 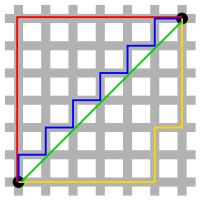 , and is the unique shortest path.

One important source of metrics in differential geometry are metric tensors, bilinear forms that may be defined from the tangent vectors of a differentiable manifold onto a scalar. A metric tensor allows distances along curves to be determined through integration, and thus determines a metric.

is the set of non-negative real numbers and for all

, the following three axioms are satisfied:

These axioms also imply the non-negativity or separation condition:

Namely, applying axioms 1, 3, and 2 in that order yields

Non-negativity and axiom 2 together define what is called a positive-definite function.

A metric is called an ultrametric if it satisfies the following stronger version of the triangle inequality where points can never fall 'between' other points:

A metric d on X is called intrinsic if any two points x and y in X can be joined by a curve with length arbitrarily close to d(x, y).

A metric d on a group G (written multiplicatively) is said to be left-invariant (resp. right invariant) if we have

is a metric defining the same topology. (One can replace

For a given set X, two metrics d1 and d2 are called topologically equivalent (uniformly equivalent) if the identity mapping

is a homeomorphism (uniform isomorphism).

is a metric, then

are metrics equivalent to

Norms on vector spaces are equivalent to certain metrics, namely homogeneous, translation-invariant ones. In other words, every norm determines a metric, and some metrics determine a norm.

Given a normed vector space

we can define a metric on X by

The metric d is said to be induced by the norm

then we can define a norm on X by

then it occurs twice in

has two elements in 1 and 2 and the multisets

have one element each in 3. For instance if

consists of two occurrences of

A simple example is the set of all nonempty finite multisets

There are numerous ways of relaxing the axioms of metrics, giving rise to various notions of generalized metric spaces. These generalizations can also be combined. The terminology used to describe them is not completely standardized. Most notably, in functional analysis pseudometrics often come from seminorms on vector spaces, and so it is natural to call them "semimetrics". This conflicts with the use of the term in topology.

Some authors allow the distance function d to attain the value ∞, i.e. distances are non-negative numbers on the extended real number line. Such a function is called an extended metric or "∞-metric". Every extended metric can be transformed to a finite metric such that the metric spaces are equivalent as far as notions of topology (such as continuity or convergence) are concerned. This can be done using a subadditive monotonically increasing bounded function which is zero at zero, e.g. d′(x, y) = d(x, y) / (1 + d(x, y)) or d′′(x, y) = min(1, d(x, y)).

The requirement that the metric take values in [0,∞) can even be relaxed to consider metrics with values in other directed sets. The reformulation of the axioms in this case leads to the construction of uniform spaces: topological spaces with an abstract structure enabling one to compare the local topologies of different points.

In some contexts, pseudometrics are referred to as semimetrics because of their relation to seminorms.

Occasionally, a quasimetric is defined as a function that satisfies all axioms for a metric with the possible exception of symmetry:[4][5]. The name of this generalisation is not entirely standardized.[6]

Quasimetrics are common in real life. For example, given a set X of mountain villages, the typical walking times between elements of X form a quasimetric because travel up hill takes longer than travel down hill. Another example is a taxicab geometry topology having one-way streets, where a path from point A to point B comprises a different set of streets than a path from B to A.

A quasimetric on the reals can be defined by setting

The topological space underlying this quasimetric space is the Sorgenfrey line. This space describes the process of filing down a metal stick: it is easy to reduce its size, but it is difficult or impossible to grow it.

If d is a quasimetric on X, a metric d' on X can be formed by taking

In a metametric, all the axioms of a metric are satisfied except that the distance between identical points is not necessarily zero. In other words, the axioms for a metametric are:

Metametrics appear in the study of Gromov hyperbolic metric spaces and their boundaries. The visual metametric on such a space satisfies d(x, x) = 0 for points x on the boundary, but otherwise d(x, x) is approximately the distance from x to the boundary. Metametrics were first defined by Jussi Väisälä.[7]

A semimetric on X is a function d : X × X → R that satisfies the first three axioms, but not necessarily the triangle inequality:

Some authors work with a weaker form of the triangle inequality, such as:

Relaxing the last three axioms leads to the notion of a premetric, i.e. a function satisfying the following conditions:

This is not a standard term. Sometimes it is used to refer to other generalizations of metrics such as pseudosemimetrics[11] or pseudometrics;[12] in translations of Russian books it sometimes appears as "prametric".[13]

Any premetric gives rise to a topology as follows. For a positive real r, the r-ball centered at a point p is defined as

A set is called open if for any point p in the set there is an r-ball centered at p which is contained in the set. Every premetric space is a topological space, and in fact a sequential space. In general, the r-balls themselves need not be open sets with respect to this topology. As for metrics, the distance between two sets A and B, is defined as

This defines a premetric on the power set of a premetric space. If we start with a (pseudosemi-)metric space, we get a pseudosemimetric, i.e. a symmetric premetric. Any premetric gives rise to a preclosure operator cl as follows:

In differential geometry, one considers a metric tensor, which can be thought of as an "infinitesimal" quadratic metric function. This is defined as a nondegenerate symmetric bilinear form on the tangent space of a manifold with an appropriate differentiability requirement. While these are not metric functions as defined in this article, they induce what is called a pseudo-semimetric function by integration of its square root along a path through the manifold. If one imposes the positive-definiteness requirement of an inner product on the metric tensor, this restricts to the case of a Riemannian manifold, and the path integration yields a metric.

In general relativity the related concept is a metric tensor (general relativity) which expresses the structure of a pseudo-Riemannian manifold. Though the term "metric" is used, the fundamental idea is different because there are non-zero null vectors in the tangent space of these manifolds, and vectors can have negative squared norms. This generalized view of "metrics", in which zero distance does not imply identity, has crept into some mathematical writing too:[16][17]

Retrieved from "http://en.turkcewiki.org/w/index.php?title=Metric_(mathematics)&oldid=957282191"
This website is a mirror of Wikipedia, and is not affiliated with the Wikimedia Foundation.
Categories:
Hidden categories: