A satellite view of the U.S. Northeast megalopolis, the second most populous megalopolis in the Western Hemisphere (after the Great Lakes Megalopolis), home to over 50 million people, displayed at night.

A megalopolis (/ˌmɛɡəˈlɒpəlɪs/), sometimes called a megapolis; also megaregion, or supercity,[1] is typically defined as a group of two or more roughly adjacent metropolitan areas, which may be somewhat separated or may merge into a continuous urban region. The megalopolis concept became highly influential as it introduced a new, larger scale in thinking about urban patterns and urban growth.[2]

The term was coined by Patrick Geddes in his 1915 book Cities in Evolution,[3][4] and used by Oswald Spengler in his 1918 book The Decline of the West, and Lewis Mumford in his 1938 book The Culture of Cities, which described it as the first stage in urban overdevelopment and social decline. Later, it was used by Jean Gottmann in his landmark 1961 study, Megalopolis: The Urbanized Northeastern Seaboard of the United States, to describe what is now commonly known as the Northeast megalopolis a.k.a. BosWash.[5][6][7] The term has been interpreted as meaning "supercity".[1] In 1994 the magazine National Geographic (Vol 186, No.1 July 1994) featured a "Double Map Supplement: Megalopolis." of Boston to Washington Circa 1830 and on the flip-side a contemporary (1994) map of the same region to coincide with the 33 page feature article "Breaking New Ground: Boston" by William S. Ellis Photographs Joel Sartore. The contemporary 1994 map cites the term Megalopolis being first used in 1961 to refer to the BosWash region. 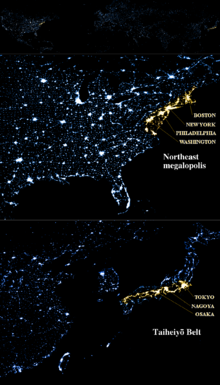 Megalopolis is often spelled Megapolis. Both are derived from μέγας (mégas) in Ancient Greek meaning 'great' and πόλις (pólis) meaning 'city', therefore literally a 'great city' (compare "megacity"). Because in Greek, πόλις is feminine, the etymologically correct term is megalopolis. Literally, megalopolis in Greek means a city of exaggerated size where the prefix megalo- represents a quantity of exaggerated size.[8] The Ancient Greek city of Megalopolis was formed by the Arcadian League by bringing together smaller communities.

A megalopolis, also known as a megaregion, is a clustered network of cities. Gottmann defined its population as 25 million.[9] Doxiadis defined a small megalopolis a similar cluster with a population of about 10 million.[10][11][12] America 2050,[13] a program of the Regional Plan Association, lists 11 megaregions in the United States and Canada.[10] Megaregions of the United States were explored in a July 2005 report by Robert E. Lang and Dawn Dhavale of the Metropolitan Institute at Virginia Tech.[14] A later 2007 article by Lang and Nelson uses 20 megapolitan areas grouped into 10 megaregions.[15] The concept is based on the original Megalopolis model.[12]

Modern interlinked ground transportation corridors, such as rail and highway, often aid in the development of megalopolises. Using these commuter passageways to travel throughout the megalopolis is informally called megaloping. This term was coined by Davide Gadren and Stefan Berteau.[16]

In China, the official term corresponding to the meaning of "megalopolis" is 城市群 (chéngshì qún), which literally means "city cluster". In Standard for basic terminology of urban planning (GB/T 50280—98) issued in 1998, 城市群 is defined as "An area in which cities are relatively densely distributed in a certain region" but wrongly translated as "agglomeration". In addition, there used to be no clear distinction between "megalopolis" and "metropolitan area" (都市圈) in Chinese context until National Development and Reform Commission issued Guidelines on the Cultivation and Development of Modern Metropolitan Areas on 19 February 2019 and clarified the definition of a metropolitan area. 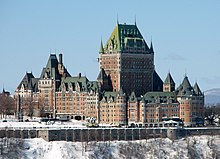 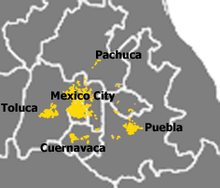 Note: Tijuana, Mexico is part of the Southern California megalopolis.

Downtown Dallas, the largest metro of the Texas Triangle 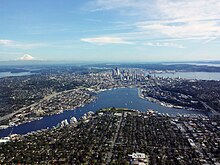 Aerial view of Seattle with Lake Union in the foreground, part of Cascadia 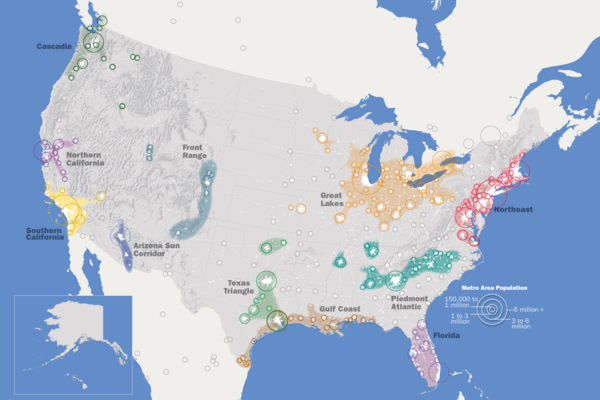 Constituent urban areas of each megalopolis are based on reckoning by a single American organization, the Regional Plan Association (RPA). The RPA definition of the Great Lakes Megalopolis includes some Canadian metropolitan areas with the United States including some but not all major urban centres in the Windsor-Quebec City Corridor. Note that one city, Houston, is listed in two different Megalopolis regions as defined by the RPA, (the Gulf Coast and Texas Triangle).[10][21] 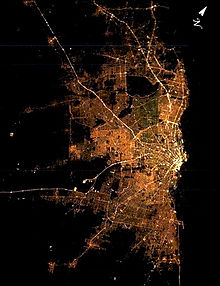 Satellite image of Greater Buenos Aires at night. Urban sprawl created a vast conurbation of 12,801,365 inhabitants including the City of Buenos Aires, a third of the total population of Argentina.

Other sources[25] show that another megaregion may be considered:

In July 2012, the Economist Intelligence Unit brought out a report entitled; Supersized cities: China’s 13 megalopolises, which pinpoints the 13 emerging megalopolises in China, and highlights the demographic and income trends that are shaping their development.

Japan is made up of overlapping megapolises. The Taiheiyō Belt megapolis itself includes both the Greater Tokyo Area and Keihanshin megapoles.

Skyline of Taipei, capital city of Taiwan in 2016.

Dhaka, Bangladesh; part of the emerging chain of cities in the Bengal region

Western Region Supercity of Colombo (Megapolis) with 3,687 km2 (1,424 sq mi) land area and currently over 7 million population comprising several municipal, urban, and town councils politically. This is planned to be spacious and modern megacity with dedicated core zones for financial, trade, industrial, educational, logistic, transport, health, sports, recreational activities and services in par with the international level. Once completed it would be one of the most livable and favored cities in the world.

Karachi comprises six district municipal corporations. The total population is 24 million according to the 2011 census.

Kathmandu valley, which consists of 5 municipalities namely Kathmandu, Lalitpur, Bhaktapur, Kirtipur and Madhyapur Thimi, along with the peripheral cities of Banepa, Panauti and Dhulikhel.

Mega Manila is made up of 4 Regions: 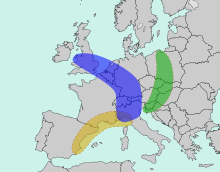 The Blue Banana, the Golden Banana and the Green Banana.

Metropolis is a 1927 German expressionist science-fiction drama film directed by Fritz Lang. Written by Thea von Harbou in collaboration with Lang,[55][full citation needed][56][full citation needed] it stars Gustav Fröhlich, Alfred Abel, Rudolf Klein-Rogge and Brigitte Helm. Erich Pommer produced it in the Babelsberg Studios for Universum Film A.G. (Ufa). The silent film is regarded as a pioneering science-fiction movie, being among the first feature-length movies of that genre.[57] Filming took place over 17 months in 1925–26 at a cost of over five million Reichsmarks.[58]

Judge Dredd (1977) Mega-City One is a huge fictional megalopolis-size city-state covering much of what is now the Eastern United States and some of Canada in the Judge Dredd comic book series and its spinoff series. The exact geography of the city depends on which writer and artist has done which story, but from its first appearance it has been associated with New York City's urban sprawl; originally it was presented as a future New York, which was retconned as the centre of a "Mega-City One" in the very next story.[59] The Architects' Journal placed it at No. 1 in their list of "comic book cities".[60]

Blade Runner (1982 Film) - Blade Runner is a 1982 neo-noir science fiction film directed by Ridley Scott, written by Hampton Fancher and David Peoples, and starring Harrison Ford, Rutger Hauer, Sean Young, and Edward James Olmos. It is a loose adaptation of Philip K. Dick's novel Do Androids Dream of Electric Sheep? (1968). The film is set in a dystopian future Los Angeles of 2019, in which synthetic humans known as replicants are bio-engineered by the powerful Tyrell Corporation to work on off-world colonies. When a fugitive group of replicants led by Roy Batty (Hauer) escapes back to Earth, burnt-out cop Rick Deckard (Ford) reluctantly agrees to hunt them down.

In William Gibson's fiction, the Sprawl is a colloquial name for the Boston-Atlanta Metropolitan Axis (BAMA), an urban sprawl environment on a massive scale, and a fictional extension of the real Northeast megalopolis. The Sprawl is a visualization of a future where virtually the entire East Coast of the United States, from Boston to Atlanta, has melded into a single mass of urban sprawl.[61] It has been enclosed in several geodesic domes and merged into one megacity. The city has become a separate world with its own climate, no real night/day cycle, and an artificial sky that is always grey.

Retrieved from "http://en.turkcewiki.org/w/index.php?title=Megalopolis&oldid=942972342"
This website is a mirror of Wikipedia, and is not affiliated with the Wikimedia Foundation.
Categories:
Hidden categories: