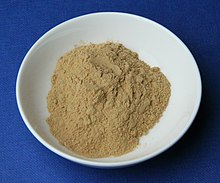 A wide variety of clays are used for medicinal purposes—primarily for external applications, such as the clay baths in health spas (mud therapy). Among the clays most commonly used are kaolin and the smectite clays such as bentonite, montmorillonite, and Fuller's earth.

The first recorded use of medicinal clay is on Mesopotamian clay tablets around 2500 B.C. Also, ancient Egyptians used clay. The Pharaohs’ physicians used the material as anti-inflammatory agents and antiseptics. It was used as a preservative for making mummies and is also reported that Cleopatra used clays to preserve her complexion.[1][2]

The Ebers Papyrus of about 1550 BC (but containing the tradition going back many centuries earlier) is an important medical text from ancient Egypt. It describes the use of ochre for a wide variety of complaints, including for intestinal problems,[3] as well as for various eye complaints.[4][unreliable source?]

This was a clay used in Classical Antiquity. It was mined on the island of Lemnos. Its use continued until the 19th century, as it was still listed in an important pharmacopoeia in 1848[5] (the deposits may have been exhausted by then).

Pliny reports about the Lemnian earth:[6]

if rubbed under the eyes, it moderates pain and watering from the same, and prevents the flow from the lachrymal ducts. In cases of haemorrhage it should be administered with vinegar. It is used against complaints of the spleen and kidneys, copious menstruation, also against poisons, and wounds caused by serpents.

Lemnian clay was shaped into tablets, or little cakes, and then distinctive seals were stamped into them, giving rise to its name terra sigillata—Latin for 'sealed earth'. Dioscorides also commented upon the use of terra sigillata.[5]

Another physician famous in antiquity, Galen, recorded numerous cases of the internal and external uses of this clay in his treatise on clay therapy.

Galen... used as one of his means for curing injuries, festering wounds, and inflammations terra sigillata, a medicinal red clay compressed into round cakes and stamped with the image of the goddess Diana. This clay, which came from the island of Lemnos, was known throughout the classical world.[7]

Clay was prescribed by the Roman obstetrician, gynecologist, and pediatrician Soranus of Ephesus, who practiced medicine around 100-140 AD.[8]

Other clays used in classical times[edit]

The other types of clay that were famous in antiquity were as follows.

All the above seem to have been bentonitic clays.

In medieval Persia, Avicenna (980-1037 CE), the 'Prince of Doctors', wrote about clay therapy in his numerous treatises.

Ibn al-Baitar (1197–1248), a Muslim scholar born at Malaga, Spain, and author of a famous work on pharmacology, discusses eight kinds of medicinal earth.[notes 1] The eight kinds are:

A French naturalist Pierre Belon (1517–1564) was interested in investigating the mystery of the Lemnian clay. In 1543, he visited Constantinople where, after making enquiries, he encountered 18 types of different products marketed as Lemnian Earth (he was concerned about possible counterfeits).

He then made a special journey to Lemnos, where he continued his investigation, and tried to find the source of the clay. He discovered that it was extracted only once a year (on 6 August) under the supervision of Christian monks and Turkish officials.

Clay gathered from its original source deposit is refined and processed in various ways by manufacturers. This can include heating or baking the clay, since the raw clay tends to contain a variety of micro-organisms.[notes 2]

Too much processing, likewise, may reduce the clay's therapeutic potential. In particular, Mascolo et al. studied 'pharmaceutical grade clay' versus 'the natural and the commercial herbalist clay', and found an appreciable depletion of trace elements in the pharmaceutical grade clay.[11] On the other hand, certain clays are typically heated or cooked before use.[notes 3]

Medicinal clay is typically available in health food stores as a dry powder, or in jars in its liquid hydrated state – which is convenient for internal use. For external use, the clay may be added to the bath, or prepared in wet packs or poultices for application to specific parts of the body.

Often, warm packs are prepared; the heat opens up the pores of the skin, and helps the interaction of the clay with the body.[notes 4]

In the European health spas, the clay is prepared for use in a multitude of ways – depending on the traditions of a particular spa; typically it is mixed with peat and matured in special pools for a few months or even up to two years.

"The majority of spas … use artificial ponds where the natural ("virgin") clay is mixed with mineral, thermo-mineral, or sea water that issues in the vicinity of the spas or inside the spa buildings."[13]

Many types of skin conditions have been treated by the application of medicinal clay. Montmorillonite has shown its effectiveness in this area.[15][16][17][18] It has also been used as a base ingredient for tissue engineering.[19] Clay is used in many dermatological over-the-counter remedies, such as in acne treatments (this information may not be mentioned on the label specifically).

There are many over the counter remedies for internal use that contained clay before discontinuation. Examples include Kaopectate (Upjohn), Rheaban (Leeming Div., Pfizer), and Diar-Aid (Thompson Medical Co.). The labels on all of these showed the active ingredient to be Attapulgite, each tablet containing 600 (or 750 mg) of this component along with inert materials or adjuvants.[20] However, since April 2003, attapulgite medication was discontinued due to lack of evidence according to the U.S. Foods and Drugs Administration.[21]

Numerous medicines also use Kaolinite clay, which has long been a traditional remedy to soothe an upset stomach. Also, Kaolin is or has been used as the active substance in liquid anti-diarrhea medicines such as Kaomagma. Such medicines were changed away from aluminium substances due to a scare over Alzheimer's disease, but have since changed back to compounds containing aluminum as they are most effective.[citation needed]

Kaolin was also used to treat cholera around the start of the 20th century. An early proponent was German physician Julius Stumpf.[22]

It has been used as a scientifically unsupported chelation treatment for heart disease and autism.[23][24]

It has been found that prolonged exposure to bentonite in humans can actually have harmful effects.[25]

Use by the NASA space program[edit] 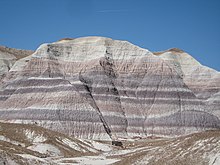 The effects of weightlessness on human body were studied by NASA in the 1960s. Experiments demonstrated that weightlessness leads to a rapid bone depletion, so various remedies were sought to counter that. A number of pharmaceutical companies were asked to develop calcium supplements, but apparently none of them were as effective as clay. The special clay that was used in this case was Terramin, a reddish clay found in California. Benjamin Ershoff of the California Polytechnic Institute demonstrated that the consumption of clay counters the effects of weightlessness. He reported that "the calcium in clay ...is absorbed more efficiently ... [clay] contains some factor or factors other than calcium which promotes improved calcium utilization and/or bone formation." He added, "Little or no benefit was noted when calcium alone was added to the diet."[26]

Side effects of ingestion[edit]

Substances discontinued such as kaolin and attapulgite were formerly considered gastric demulcents and diarrhea medication, until official studies by the USFDA disproved these views. Clays are classified as excipients and their main side-effects are that of neutral excipients, which is to impair and slow down absorption of antibiotics, hormones and heart medication amongst others by coating the digestive tract [27] and this slowed down absorption can lead to increased toxicity of some medication (e.g. citrate salts) which can become toxic if not metabolized quickly enough, which is one contraindication of attapulgite.[28] Usual mild side-effects are nausea, slowed down absorption of nutrients from food (in excess dosage of medicinal clay) and constipation.

Retrieved from "http://en.turkcewiki.org/w/index.php?title=Medicinal_clay&oldid=962628281"
This website is a mirror of Wikipedia, and is not affiliated with the Wikimedia Foundation.
Categories:
Hidden categories: