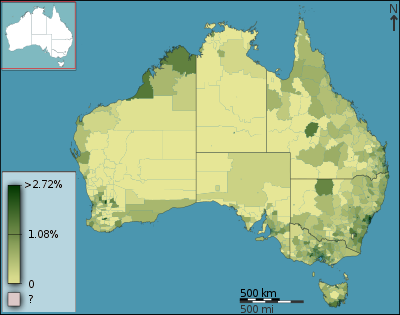 Adults employed in the information media and telecommunications industries as a percentage of the adult population in Australia divided geographically by statistical local area, as of the 2011 census

Australia has a modern and diverse media industry spanning traditional and digital formats, and catering mostly to its predominantly English-speaking population. In 2018 the Press Freedom Index ranked Australia 19th out of 180 countries,[1] although by 2020 Australia's ranking had somewhat declined to 26th out of 180 countries.[2]

Mass media is delivered in a variety of formats including radio, television, paper, internet and IPTV. Varieties include local, regional, state, federal and international sources of media, reporting on Australian news, opinion, policy, issues and culture.

New South Wales and Victoria were introduced to television in 1956, with the other states and territories following suit up to 1971 (the Northern Territory). Colour television was introduced in 1975.[3]

In addition to the public broadcasters which are available to almost all of Australia's population, there are three major commercial television networks: the Nine Network, the Seven Network and Network Ten. Most of Australia's heavily populated cities are serviced by all three networks. Some rural or regional areas may receive a more limited selection, often with some of the channels available showing programming from more than one of the major networks. An example of such a "shared" regional network is Imparja.

Digital free-to-air broadcasts commenced on 1 January 2001. Analogue broadcasts were originally intended to be phased out by 2008, however analogue phaseout was not achieved until 2013.

After heated debate in the early 2000s over a Bill that would have removed the foreign ownership restrictions of broadcasting TV licences, the Australian government chose to retain the foreign-ownership restrictions in its 1992 Broadcasting Act. The Howard Government was set to remove this law sometime in 2007, having gained parliamentary approval to change the legislation in 2006.

In 2007, with Helen Coonan as communications minister, there were two significant changes. Foreign ownership limits were scrapped, government changed the cross-media ownership rules to allow ownership of two out of three media types.[4]

Approximately 25% of Australian households had access to pay television services by the end of 2005. The main provider is Foxtel in both metropolitan, regional and rural areas offering nearly all Australian channels via cable & satellite TV in capital cities, and mostly the same channels are offered by Foxtel via satellite TV (predominantly) in regional areas with the recent merger with Austar in 2012.

There are several smaller competitors offer a subset of channels – with Fetch TV entering the market in 2010 with a subscription service over a few ADSL2+ networks, and TransACT offering TV via its own VDSL, VDSL2 and FTTP/FTTH networks in Canberra and its Neighborhood Cable network in parts of Victoria. Other providers of Internet television in Australia offer free content or PPV, but don't offer a subscription product. UBI World TV offers a number of ethnic satellite TV and Radio channels nationwide, and other small companies offer some channels via satellite, especially foreign services or free-to-air channels, and some channels are available over the Internet.

Australia's first regular radio broadcasts began on 13 November 1923 with station 2SB (later to become 2BL) in Sydney. The ABC began broadcasting in 1932. [1] Talkback radio was first broadcast with 2UE in Sydney, just after midnight on 17 April 1967.[6] ABC began experimenting with FM stations in the 1960s, but it wasn't until July 1980 that the first FM station commenced full operations.[7] Melbourne-based 3EON (now known as 3MMM)[8] was the first to air.[7]

In 2009, there were 274 operational commercial stations (funded by advertising) and 341 community (publicly funded) radio stations.[9]

Regulation of the media is principally assured by the Australian Government through its power to make laws governing telecommunications. The Australian states and territories also have important roles in this area, notably in the area of defamation law, although their laws may not conflict with a valid federal law.

The Australian Communications and Media Authority (ACMA) is the broadcasting regulator for radio and television in Australia, and also the co-regulatory Online Content Scheme. Consumers who have complaints about programs on television and radio or certain types of content on the Internet can apply to the ACMA.

The Commercial Television Code of Practice is a set of regulatory guidelines, registered with the ACMA, with which commercial television broadcasters should comply. The Australian Press Council is the self-regulatory body of the print media. The Council deals with complaints from the public about editorial material in newspapers and magazines published in Australia, and aims to maintain the freedom of the press.

Controls over media ownership in Australia are laid down in the Broadcasting Services Act 1992, administered by the ACMA. Even with laws in place Australia has a high concentration of media ownership compared to other western countries. Ownership of national and the newspapers of each capital city are dominated by two corporations, Rupert Murdoch's News Corp, (which was founded in Adelaide but is now based from the United States) and Nine Entertainment – Murdoch-owned titles account for nearly two-thirds (64.2 per cent) of metropolitan circulation[10] and Nine-owned papers account for a further quarter (26.4 per cent).[10]

News Corp, Nine and Seven West Media co-own Australian Associated Press (AAP) which distributes the news and then sells it on to other outlets such as the Australian Broadcasting Corporation. Although much of the everyday mainstream news is drawn from the AAP, all the privately owned media outlets still compete with each other for exclusive pop culture news.

Rural and regional media is dominated by Australian Community Media (formerly Rural Press), with significant holdings in all states and territories. Rural Press received a takeover offer from John Fairfax Holdings in late 2006, and completed the merger on 8 May 2007.[11]

There are rules governing foreign ownership of Australian media and these rules were loosened by Helen Coonan under the Howard Government via Act No. 129 of 2006 which allowed for changes to the cross-media and foreign ownership laws with the Broadcasting Services Amendment (Media Ownership) Bill 2006 . These changes came into effect in 2007 and are still in Force. The changes relaxed restrictions against cross-media ownership & control by a single company.

According to Reporters Without Borders in 2006, Australia was in 35th position on a list of countries ranked by Press Freedom; well behind New Zealand (19th) and United Kingdom (27th) (but well ahead of the US, ranked 53rd). This ranking was primarily due to the restrictions imposed by the recent anti-terrorism laws. The problem, and the concentration of media ownership, was one of many mentioned on the television show Media Watch, broadcast on the government funded ABC. As of 2018 these rankings have changed with Australia moving up to 19th, New Zealand moving up to 8th and the United Kingdom falling to 40th.[12]

On 4 June 2019 the Australian Federal Police conducted a raid on the home of News Corp journalist, Annika Smethurst's home looking for information connected to a story she had written a years earlier about new laws that would give the security forces new powers for surveillance over Australian citizens.[13] Radio host, Ben Fordham also claimed that he was under investigation for some of his reporting.[14]

The next day the police raided the ABC over a story about alleged war crimes in Afghanistan.[15] The search warrant allowed the police to "add, copy, delete or alter" any files they found on the computers.[16]

The incidents caused an outcry of condemnation, even from the Reporters Without Borders, BBC and The New York Times.[17]

In Australia itself, newspaper outlets normally driven by partisanship and advertising exhibited a surprisingly united show of protest on 21 October as they published front pages with the appearance of documents having been blacked out by government censors. The protest demanded journalists gain access to sensitive government material.[18] Most of the larger media outlets formed a coalition, Right To Know, to represent the protest and demand six changes in legislation. The demands are, for the ability to contest any search warrant of a journalist or news entity while the search warrant is under request, reform of whistleblower protection, new limitations on which documents may be classified as secret, changes in freedom of information, exemption from national security laws enacted over the previous seven years, and reforms of defamation laws.[19]

Retrieved from "http://en.turkcewiki.org/w/index.php?title=Mass_media_in_Australia&oldid=966512415"
This website is a mirror of Wikipedia, and is not affiliated with the Wikimedia Foundation.
Categories:
Hidden categories: