Jump to navigation Jump to search
General term for the several definitions of mean value, the sum divided by the count
This article is about the mathematical concept. For other uses, see Mean (disambiguation).
For the state of being mean or cruel, see Meanness.
For broader coverage of this topic, see Average.

There are several kinds of mean in mathematics, especially in statistics.

[note 1]. If the data set were based on a series of observations obtained by sampling from a statistical population, the arithmetic mean is the sample mean (denoted

) to distinguish it from the mean of the underlying distribution, the population mean (denoted

Outside probability and statistics, a wide range of other notions of mean are often used in geometry and mathematical analysis; examples are given below.

The arithmetic mean (or simply mean) of a sample

, is the sum of the sampled values divided by the number of items in the sample

The geometric mean is an average that is useful for sets of positive numbers that are interpreted according to their product and not their sum (as is the case with the arithmetic mean); e.g., rates of growth.

The harmonic mean is an average which is useful for sets of numbers which are defined in relation to some unit, for example speed (distance per unit of time).

Relationship between AM, GM, and HM[edit]

AM, GM, and HM satisfy these inequalities:

Equality holds if and only if all the elements of the given sample are equal. 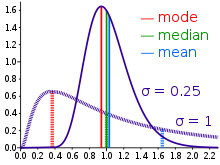 Comparison of the arithmetic mean, median and mode of two skewed (log-normal) distributions.

Geometric visualization of the mode, median and mean of an arbitrary probability density function.[5]

In descriptive statistics, the mean may be confused with the median, mode or mid-range, as any of these may be called an "average" (more formally, a measure of central tendency). The mean of a set of observations is the arithmetic average of the values; however, for skewed distributions, the mean is not necessarily the same as the middle value (median), or the most likely value (mode). For example, mean income is typically skewed upwards by a small number of people with very large incomes, so that the majority have an income lower than the mean. By contrast, the median income is the level at which half the population is below and half is above. The mode income is the most likely income and favors the larger number of people with lower incomes. While the median and mode are often more intuitive measures for such skewed data, many skewed distributions are in fact best described by their mean, including the exponential and Poisson distributions.

Mean of a probability distribution[edit]

, where the sum is taken over all possible values of the random variable and

is the probability mass function. For a continuous distribution,the mean is

is the probability density function. In all cases, including those in which the distribution is neither discrete nor continuous, the mean is the Lebesgue integral of the random variable with respect to its probability measure. The mean need not exist or be finite; for some probability distributions the mean is infinite (+∞ or −∞), while others have no mean.

The generalized mean, also known as the power mean or Hölder mean, is an abstraction of the quadratic, arithmetic, geometric and harmonic means. It is defined for a set of n positive numbers xi by

By choosing different values for the parameter m, the following types of means are obtained:

and again a suitable choice of an invertible f will give

The weighted arithmetic mean (or weighted average) is used if one wants to combine average values from samples of the same population with different sample sizes:

represent the sizes of the different samples. In other applications, they represent a measure for the reliability of the influence upon the mean by the respective values.

Sometimes a set of numbers might contain outliers, i.e., data values which are much lower or much higher than the others. Often, outliers are erroneous data caused by artifacts. In this case, one can use a truncated mean. It involves discarding given parts of the data at the top or the bottom end, typically an equal amount at each end and then taking the arithmetic mean of the remaining data. The number of values removed is indicated as a percentage of the total number of values.

The interquartile mean is a specific example of a truncated mean. It is simply the arithmetic mean after removing the lowest and the highest quarter of values.

assuming the values have been ordered, so is simply a specific example of a weighted mean for a specific set of weights.

Main article: Mean of a function

In some circumstances mathematicians may calculate a mean of an infinite (even an uncountable) set of values. This can happen when calculating the mean value

. Intuitively this can be thought of as calculating the area under a section of a curve and then dividing by the length of that section. This can be done crudely by counting squares on graph paper or more precisely by integration. The integration formula is written as:

Care must be taken to make sure that the integral converges. But the mean may be finite even if the function itself tends to infinity at some points.

Mean of angles and cyclical quantities[edit]

Angles, times of day, and other cyclical quantities require modular arithmetic to add and otherwise combine numbers. In all these situations, there will not be a unique mean. For example, the times an hour before and after midnight are equidistant to both midnight and noon. It is also possible that no mean exists. Consider a color wheel—there is no mean to the set of all colors. In these situations, you must decide which mean is most useful. You can do this by adjusting the values before averaging, or by using a specialized approach for the mean of circular quantities.

The Fréchet mean gives a manner for determining the "center" of a mass distribution on a surface or, more generally, Riemannian manifold. Unlike many other means, the Fréchet mean is defined on a space whose elements cannot necessarily be added together or multiplied by scalars. It is sometimes also known as the Karcher mean (named after Hermann Karcher).

Distribution of the sample mean[edit]

The arithmetic mean of a population, or population mean, is often denoted μ. The sample mean

and the variance of the sample mean is

Retrieved from "http://en.turkcewiki.org/w/index.php?title=Mean&oldid=971432865"
This website is a mirror of Wikipedia, and is not affiliated with the Wikimedia Foundation.
Categories:
Hidden categories: