McKinney is a city in and the county seat of Collin County, Texas,[5] United States. It is Collin County's second-largest city, after Plano. An exurb of the Dallas-Fort Worth metroplex, McKinney is about 32 miles (51 km) north of Dallas. 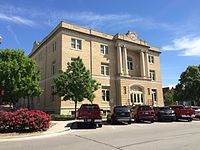 For the first 125 years of its history, McKinney served as the principal commercial center for the county. The county seat provided farmers with flour, corn, and cotton mills, cotton gins, a cotton compress, and a cottonseed oil mill, as well as banks, churches, schools, newspapers, and from the 1880s, an opera house. Businesses also came to include a textile mill, an ice company, a large dairy, and a garment-manufacturing company. The population grew from 35 in 1848 to 4,714 in 1912. By 1953, McKinney had a population of more than 10,000 and 355 businesses. The town continued to serve as an agribusiness center for the county until the late 1960s.

Both the city and the county were named for Collin McKinney, signer of the Texas Declaration of Independence, and a congressman for the Red River district of the Republic of Texas. He was the author of a bill establishing counties in the northern part of the state.[11]

McKinney is considered part of the humid subtropical region.

It is also part of the Texas blackland prairies, which means it gets hot summers because it is in the Sun Belt. Humidity makes temperatures feel higher, and winters are mild and are usually rainy; snowstorms occasionally occur. Spring is the wettest part of the year, which brings winds from the Gulf Coast.

According to the city's 2018 Comprehensive Annual Financial Report,[16]

The top 10 employers in the city are: 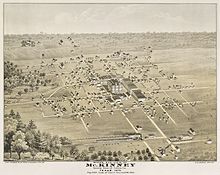 McKinney's City Manager serves under the direction of the City Council, and administers and coordinates the implementation of procedures, policies, and ordinances.[18]

The city of McKinney is a voluntary member of the North Central Texas Council of Governments association, the purpose of which is to coordinate individual and collective local governments and facilitate regional solutions, eliminate unnecessary duplication, and enable joint decisions.

At the federal level, the two U.S. senators from Texas are Republicans John Cornyn and Ted Cruz. McKinney is part of Texas's U.S. Congressional 3rd District, which is represented by Republican Van Taylor.

The McKinney Police Department is the primary municipal law enforcement agency that serves the city. Chief Greg Conley is the head of the department. For fiscal year 2016–17, there was an authorized total of 201 sworn peace officers and 59 non-sworn civilian positions.[19]

The department was awarded national accredited status from the Commission on Accreditation for Law Enforcement Agencies (CALEA)[20] and is also a Texas Police Chief's Association Foundation (TPCAF) Recognized Agency,[21] making it only the third agency in Texas to receive both state and national accreditation.[19]

Notable recent incidents in the department's history include: the high-profile investigation of a 2004 quadruple homicide that claimed the lives of two adults and two high school football players;[22] a 2010 attack on the police department headquarters by a gunman who fired over 100 rifle rounds at the building and employees after attempting to detonate a truck and trailer full of explosives;[23] and protests and media attention after a video was released showing an officer pinning a young Black girl at a pool party in 2015.[24]

McKinney is the home of the Central Park Campus of Collin College near the city's center at US 75 and US 380, which opened in 1985 as the initial campus for the community college district.[28] The Collin Higher Education Center campus of Collin College opened in southern McKinney in 2010 and offers select bachelor's, master's, and doctoral degree programs in partnership with Texas A&M University-Commerce, Texas Woman's University, The University of Texas at Dallas, and the University of North Texas.[29]

Imagine International Academy of North Texas is a no-tuition open-enrollment public charter school for grades K–12 in McKinney. It is open to students within any school district that serves McKinney residents. It is state-funded, independently run, and not part of any school district.[33]

The McKinney Courier-Gazette is a daily newspaper published in McKinney, Texas, covering Collin County.[34] It is owned by American Community Newspapers.

McKinney is served by two U.S. Highways: US 75 and US 380. The city is also bordered by the Sam Rayburn Tollway, a toll road administered by the North Texas Tollway Authority that runs to Dallas/Fort Worth International Airport.

The far southwestern corner of McKinney, in the large Craig Ranch development, has a trolley bus that serves the development and some shopping centers in the surrounding area.

Retrieved from "http://en.turkcewiki.org/w/index.php?title=McKinney,_Texas&oldid=965544657"
This website is a mirror of Wikipedia, and is not affiliated with the Wikimedia Foundation.
Categories:
Hidden categories: