Marty is a 1955 American romantic drama film directed by Delbert Mann. The screenplay was written by Paddy Chayefsky, expanding upon his 1953 teleplay of the same name, which was broadcast on The Philco-Goodyear Television Playhouse and starred Rod Steiger in the title role.[4][5]

The film stars Ernest Borgnine and Betsy Blair. In addition to winning an Academy Award for Best Picture, the film enjoyed international success, becoming the fourth American film to win the Palme d'Or. Marty, The Lost Weekend (1945) and Parasite (2019) are the only three films to win both organizations' grand prizes.

In 1994, Marty was deemed "culturally, historically or aesthetically significant" and selected for preservation in the Library of Congress' National Film Registry.[6]

In 1955, Marty Piletti (Ernest Borgnine) is an Italian American butcher who lives in The Bronx with his mother (Esther Minciotti). Unmarried at 34, the good-natured but socially awkward Marty faces constant badgering from family and friends to settle down, pointing out that all his brothers and sisters are already married with children. Not averse to marriage but disheartened by his lack of prospects, Marty has reluctantly resigned himself to bachelorhood.

After being harassed by his mother into going to the Stardust Ballroom one Saturday night, Marty connects with Clara (Betsy Blair), a plain science teacher at Benjamin Franklin High School, who is quietly weeping on the roof after being callously abandoned at the ballroom by her blind date. They spend the evening together dancing, walking the busy streets, and talking in a diner. Marty eagerly spills out his life story and ambitions, and they encourage each other. He brings Clara to his house, and they awkwardly express their mutual attraction, shortly before his mother returns. Marty takes her home by bus, promising to call her at 2:30 the next afternoon, after Mass. Overjoyed on his way back home, he punches the bus stop sign and weaves between the cars, looking for a cab instead.

Meanwhile, his cranky, busybody widowed Aunt Catherine (Augusta Ciolli) moves in to live with Marty and his mother. She warns his mother that Marty will soon marry and cast her aside. Fearing that Marty's romance could spell her abandonment, his mother belittles Clara. Marty's friends, with an undercurrent of envy, deride Clara for her plainness and try to convince him to forget her and to remain with them, unmarried, in their fading youth. Harangued into submission by the pull of his friends, Marty doesn't call Clara.

That night, back in the same lonely rut, Marty realizes that he is giving up a woman whom he not only likes, but who makes him happy. Over the objections of his friends, he dashes to a phone booth to call Clara, who is disconsolately watching television with her parents. When his friend asks what he's doing, Marty bursts out saying:

Marty closes the phone booth's door when Clara answers the phone. In the last line of the film, he tentatively says, "Hello ... Hello, Clara?" 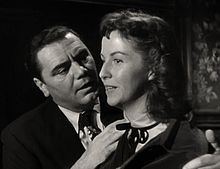 Ernest Borgnine with Betsy Blair in the trailer for Marty, 1955

For the film, Esther Minciotti, Augusta Ciolli and Joe Mantell reprised their roles from the live television production. The screenplay changed the name of the Waverly Ballroom to the Stardust Ballroom. The film expanded the role of Clara, and subplots about Marty's career and his mother and her sister were added.[7]

Shooting for the film began on September 7, 1954, in The Bronx, and included many aspects of the borough into the film, such as Grand Concourse, Arthur Avenue, Gun Hill Road, White Plains Road, and several Bronx subway and elevated train lines, including the Concourse, Third Avenue, White Plains Road, and Jerome Avenue lines. On-set filming took place at Samuel Goldwyn Studios on November 1, 1954. Bronx native Jerry Orbach made his film debut in an uncredited role as a ballroom patron. Chayefsky had an uncredited cameo as Leo.

The role of Clara was initially going to be reprised by actress Nancy Marchand, later of Lou Grant and The Sopranos fame, who had portrayed the character in the television version. However, actress Betsy Blair was interested in playing the role and lobbied hard for it. At the time, Blair, who was married to actor Gene Kelly, had been blacklisted due to her Marxist and communist sympathies. It was only through the lobbying of Kelly, who used his major star status and connections at MGM to pressure United Artists, that Blair got the role. Reportedly, Kelly threatened to pull out of the film It's Always Fair Weather if Blair did not get the role of Clara.[8][9][10][11]

Mann shot the film in sixteen days plus an additional three days for retakes.[12]

Upon its premiere on April 11, 1955 (followed by a wide release on July 15), Marty received overwhelmingly positive reviews from critics.[13] Ronald Holloway of Variety wrote, "If Marty is an example of the type of material that can be gleaned, then studio story editors better spend more time at home looking at television."[14] Time described the film as "wonderful."[15] Louella Parsons enjoyed the film, although she felt that it would not likely be nominated for Oscars.[16] At a budget of $343,000, the film generated revenues of $3,000,000 in the U.S. alone, making it a box office success.[17]

Rotten Tomatoes gives it a score of 100% based on 33 reviews, with an average rating of 8.16/10. The site's consensus reads: "Scriptwriter Paddy Chayefsky's solid dialogue is bolstered by strong performances from Ernest Borgnine and Betsy Blair in this appealingly low-key character study."[13]

The film is recognized by American Film Institute.

Marty is the first one to win the Palme d'Or.[19] Marty, The Lost Weekend and Parasite are the only films ever to win both the Academy Award for Best Picture and the highest award at the Cannes Film Festival (Marty and Parasite both received the Palme d'Or, which, beginning at the 1955 festival, replaced the Grand Prix du Festival International du Film as the highest award).[20][21][22]

Retrieved from "http://en.turkcewiki.org/w/index.php?title=Marty_(film)&oldid=963136849"
This website is a mirror of Wikipedia, and is not affiliated with the Wikimedia Foundation.
Categories:
Hidden categories: