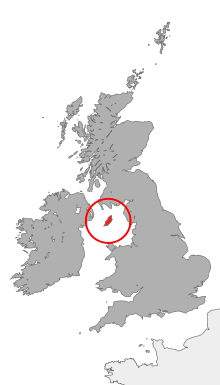 Location of the Isle of Man within Ireland and the UK.

Manx English, or Anglo-Manx (Manx: Baarle Ghaelgagh), is the historic dialect of English spoken on the Isle of Man, though today in decline. It has many borrowings from Manx, a Goidelic language, and it differs widely from any other variety of English, including dialects from other areas in which Celtic languages are or were spoken, such as Welsh English and Hiberno-English.

Early Anglo-Manx contained words of Gaelic and Norse origin, but also came to be influenced by the speech of Liverpool and Lancashire in North West England. The Manx historian and linguist A.W. Moore noted that the dialect varied slightly from parish to parish but that the same turns of phrase and the same stock of words pervaded the whole Island. A.W. Moore's A Vocabulary of the Anglo-Manx Dialect (Oxford University Press, 1924) and W.W. Gill's Manx Dialect Words and Phrases (J.W. Arrowsmith, 1934) document the high-water mark of this dialect.

The poet T.E. Brown was one of the first authors to use the Manx dialect in his work.

Immigration and cultural influences from elsewhere, particularly the United Kingdom, have caused the disappearance of the dialect, with the exception of a few words and phrases.

Manx English has been unusually well-researched. In the 19th century, Kirk Christ and Kirk Patrick were covered by surveyors working for Alexander John Ellis's work On Early English Pronunciation. In the 20th century, sites on the Isle of Man were covered by both the Survey of English Dialects and the Linguistic Survey of Scotland. The two sites for the former were Andreas and Ronague; the recordings of the local dialects are now accessible for free online via the British Library.[1]

Some of the following terms surviving from the original Anglo-Manx dialect are still in occasional use today. The task of identifying dialectal usage is complicated by the large cross-over between Manx Gaelic, idiomatic usage and technical/administrative terms such as "advocate" and "deemster".

It was forbidden to name a hare on board, or a rabbit, or a rat or a cat. The hare was 'the big-eared fellow', and the rabbit 'pomet', and the rat 'sacote', and the cat 'scratcher'.

Because of the unpredictable nature of weather in the Irish Sea, fishing could be a dangerous business – sailors were consequently very superstitious and it was considered taboo to use certain words or behaviours (using the word conney for rabbit, or whistling, for example) whilst on board ship. Some names were substituted for others – "rat" became "sacote" or "long-tailed fellow", amongst other names.

This has evolved into a modern superstition in which the word "rat" (roddan in Manx) is considered unlucky, even when not used aboard ship. Although this particular sea-taboo was one amongst many and was not held to apply on land, it has become a popular modern belief that the word is somehow unlucky, and the sea-taboo has been adopted by some as a typical Manx practice, even though the old Manx people had no qualms in using the word, or its Manx equivalent, roddan. In modern times, even non-local and unsuperstitious people will refrain from using the word "rat", perhaps in an effort to fit in with those who take it seriously, or in an attempt to sound folksy. In reality this is a rather warped version of the original sea-taboo.

A few phrases have survived to become common parlance, amongst these (all of Gaelic origin):

Retrieved from "http://en.turkcewiki.org/w/index.php?title=Manx_English&oldid=958637794"
This website is a mirror of Wikipedia, and is not affiliated with the Wikimedia Foundation.
Categories:
Hidden categories: