The M9 is a major motorway in Scotland. It runs from the outskirts of Edinburgh, bypassing the towns of Linlithgow, Falkirk, Grangemouth and Stirling to end at Dunblane.

The road is approximately 30 miles (48 km) long, and runs in a roughly north-west direction from the M8. It meets the A8 at Newbridge – a traffic blackspot before the junction was grade separated. Its next junction is with the M90, the first part of which used to be a spur of the M9 towards the Forth Road Bridge. This spur ended at the single carriageway A8000 road 2 miles (3.2 km) short of the bridge, but was extended in September 2007 to meet the A90 at Scotstoun.

The road shares space with 1 mile (1.6 km) of the M876 en route to the Kincardine Bridge east of Stenhousemuir, at this point the motorway has 3 lanes in each direction, making it the most northerly stretch of motorway in the UK to be 3 lanes wide. At Stirling it meets the M80 (junction 9 of both motorways), taking over the main route through the Carse of Lecropt to the final roundabout at Dunblane. From there, the A9 runs all the way to Thurso. Moto services are located at the M9/M80 junction, accessed via a roundabout which allows access to all routes. 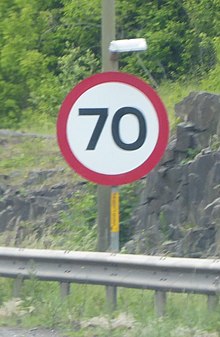 Speed limit sign at the exit for Edinburgh (Junction 2)

Template:Attached KML/M9 motorway (Scotland)
KML is from Wikidata
Retrieved from "http://en.turkcewiki.org/w/index.php?title=M9_motorway_(Scotland)&oldid=902838922"
This website is a mirror of Wikipedia, and is not affiliated with the Wikimedia Foundation.
Categories:
Hidden categories: