The M63 motorway was a major road in the United Kingdom. It was completely renumbered as part of the M60 motorway in 1999 which orbits part of Greater Manchester.

The earliest section of the M63 opened in 1960 as part of the M62 motorway.[1] When the westward extension of the M62 in the direction of Liverpool opened, the existing section of motorway south of the Eccles Interchange was renumbered as the M63.

This was the first stretch of motorway to be built, opening as the M62. This section runs from the Worsley Interchange (what is now Junction 13 of the M60) as far as the junction with the A56 at Chester Road (now junction 7 of the M60). This section includes the Barton High Level Bridge, a bridge over the Manchester Ship Canal. The embankments for the bridge were the first physical step towards the construction of any motorway in the UK. With the extension of the M62 west to Liverpool, the section from the Eccles Interchange down to Stretford was redesignated M63.

The junctions were numbered in the opposite direction to the current M60 numbering, with M63 junction 1 being the Eccles Interchange, running to junction 7 at Chester Road. Originally there was no junction 6.

Developments in the late 1980s[edit]

In 1986, work began on two major schemes on the route.

The first involved the construction of the A6144(M) motorway, and a new junction and parallel link roads for the M63. The new junction was numbered as junction 6 (now junction 8 of the M60). The new junction forced the closure of junction 5, which served Urmston and the B5213, due to the small gap between the two.

The second involved the widening of the motorway between the Eccles Interchange and junction 3 (now junction 9 of the M60), including the Barton motorway bridge, which was a major engineering feat.

This section of motorway was the third section of the motorway completed, opening as the M63 in September 1974, just 8 months after the section of the Sharston bypass opened. The route largely followed the lightly developed valley and flood planes of the River Mersey, so much of the motorway was on a raised embankment to be clear of potential floodwater. Some of the excavated land for the embankment allowed construction of Sale Water Park, which is adjacent to the motorway. The section of motorway ran from what was then junction 7 at Chester Road (A56) to the recently completed Kingsway Interchange with the A34, what was then junction 10 of the M63 (now junction 3/4 of the M60).

A major free-flow junction was provided for the A5103 Princess Parkway, which provided links towards the city of Manchester and the M56 motorway. 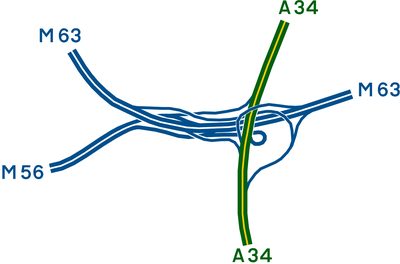 The layout of the Kingsway Interchange which opened in 1974 as part of the Sharston bypass scheme, originally junction 10 of the M63, with the M63 since having been renumbered to M60.

This section of motorway was the second section completed, opening as the M63 (and part as the M56 motorway) in January 1974. It was only a short section, running from what is now junction 2 of the M56 to junction 2 of the M60 (then junction 11 of the M63), but it included a very large free-flow junction providing links to the M56 and A34.

A significant feature of the bypass is where the motorway passes through two of the arches of the large railway viaduct in the centre of Stockport (one of the largest brick-built structures in Europe). In much of the cutting on the eastern side of the viaduct, red sandstone, on which much of the town is built, can be seen very close to the motorway.

The section of motorway was widened from two to three lane carriageways in 1999 and 2000, around the time when the M63 was renumbered to M60.

This scheme was part of a wider scheme, which involved the construction of a section of what was then the M66 motorway as far as the junction with the A57 and M67 motorway. The M63 was extended eastwards from the Portwood roundabout to a junction at Brinnington, opening in April 1989.

The complete scheme intended for the M63 to continue east from Brinnington to join the A560 at Hattersley, and for the M66 to continue south becoming A6(M) motorway, forming a Stockport North-South bypass. However, the remaining plans for the M63 were subsequently abandoned, and the southern extension, although it still exists at the planning stage in an altered and downgraded form, has yet to be built.

The junction at Brinnington (now junction 25 of the M60, then junction 15 of the M63) left room for both the extension to the east and the A6(M) to be constructed. As a result, the entry to junction 25 in the anti- clockwise direction is from the outside lane, and the carriageways passing through this junction have sharp corners on the M60 main-line, as these were originally intended to be slip roads. In the clockwise direction the motorway is now subject to a reduced speed limit through the junction. The current plans for the North-South bypass do not intend to complete the junction as originally intended, or to utilise stubs of the slip roads already constructed in preparation.[2]

This section was widened from two to three lane carriageways along with the Stockport East-West Bypass in 1999 and 2000. 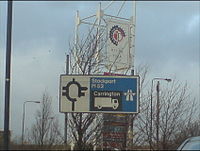 Despite the M63 being renumbered in 1999 to M60, many roadsigns still existed pointing travellers to the M63 until late 2005. There is still at least one M63 sign. One existed on the roundabout Redclyffe Circle near the Trafford Centre stating "Stockport M63, Carrington", but this was replaced with an M60 sign in the period 2012-2014.[3] There were also two signs on Manchester Road, Wilmslow, which remained until at least April 2013.[4] Another sign could be found on Trafford Road, Salford Quays across the road from Exchange Quay. There was another sign, which could be found at the roundabout joining Alderley Road in Wilmslow. This sign was still in place in June 2016,[5] but has since been removed.

Retrieved from "http://en.turkcewiki.org/w/index.php?title=M63_motorway&oldid=914684242"
This website is a mirror of Wikipedia, and is not affiliated with the Wikimedia Foundation.
Categories:
Hidden categories: