Lyman J. Abbott was born at Roxbury, Massachusetts on December 18, 1835, the son of the prolific author, educator and historian Jacob Abbott. Lyman Abbott grew up in Farmington, Maine and later in New York City.[5] Abbott's ancestors were from England, and came to America roughly twenty years after Plymouth Rock.[6]

He graduated from the New York University in 1853, where he was a member of the Eucleian Society, studied law, and was admitted to the bar in 1856. Abbott soon abandoned the legal profession, however, and after studying theology with his uncle, John Stevens Cabot Abbott, was ordained a minister of the Congregational Church in 1860.

He was pastor of the Congregational Church in Terre Haute, Indiana from 1860 to 1865 and of the New England Church in New York City in 1865–1869. From 1865 to 1868 he was secretary of the American Union Commission (later called the American Freedmen's Bureau). In 1869 he resigned his pastorate to devote himself to literature. 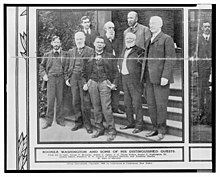 With Booker Washington and other dignitaries

Abbot worked variously in the publishing profession as an associate editor of Harper's Magazine, and was the founder of a publication called the Illustrated Christian Weekly,[7] which he edited for six years. He was also the co-editor of The Christian Union with Henry Ward Beecher from 1876 to 1881. Abbott later succeeded Beecher in 1888 as pastor of Plymouth Church, Brooklyn. He also wrote the official biography of Beecher and edited his papers.[4]

From 1881 Abbott was editor-in-chief of The Christian Union, renamed The Outlook in 1893; this periodical reflected his efforts toward social reform, and, in theology, a liberality, humanitarianism and nearly unitarian. The latter characteristics marked his published works also.

Abbott's opinions differed from those of Beecher. Abbott was a constant advocate of Industrial Democracy,[8] and was an advocate of Theodore Roosevelt's progressivism for almost 20 years. He would later adopt a pronouncedly liberal theology. He was also a pronounced Christian Evolutionist.[9] In two of his books, The Evolution of Christianity and The Theology of an Evolutionist, Abbott applied the concept of evolution in a Christian theological perspective. Although he himself objected to being called an advocate of Darwinism, he was an optimistic advocate of evolution who thought that "what Jesus saw, humanity is becoming."

Abbott was a religious figure of some public note and was called upon on October 30, 1897, to deliver an address in New York at the funeral of economist, Henry George.[10] He ultimately resigned his pastorate in November 1898.[7]

His son, Lawrence Fraser Abbott, accompanied President Roosevelt on a tour of Europe and Africa (1909–10). In 1913 Lyman Abbott was expelled from the American Peace Society because military preparedness was vigorously advocated in the Outlook,[11] which he edited, and because he was a member of the Army and Navy League. During the World War I he was a strong supporter of the government's war policies.

Lyman Abbott died on October 22, 1922 and was buried in the New Windsor Cemetery in Cornwall-on-Hudson, New York.

The editors of The Outlook kept their normal routine, publishing without “departure from the normal course of publication” since that was what their departed colleague would have wanted. The issue asked readers for understanding as the paper “wait[ed] until [the] next week to give to his friends, known and unknown, a record of his life and of the tributes which marked his passing.” [12] A brief tribute appeared in that issue, but the November 8th edition contained the official remembrance and tributes. Fifteen pages in that issue dealt with Abbott, and the publishers included "several long essays in Abbott’s honor from close relatives, shorter tributes from friends and past associates, and blurbs from many American press companies." [13]

The many diverse and prominent author who contributed tributes "demonstrated the scope and magnitude of Lyman Abbott’s influence within American religious and intellectual culture during his long career."[14] Prominent examples include a re-published 1915 tribute from former United States president Theodore Roosevelt and articles from prestigious newspapers such as The New York Times and the New York Herald. Roosevelt praised Abbott for being “one of those men whose work and life give strength to all who believe in this country,” and the New York Herald recalled Abbott’s ability to “convey his valuable opinions to the entire intellectual public.”[15] Dr. Henry Sloane Coffin noted at a later memorial service, "Measured by the number of people he reached, Dr. Abbott was unquestionably the greatest teacher of religion of this generation.” [16][17]

Abbott's lasting influence and widespread appeal is readily apparent in later evaluations of his life. Abbott’s one biographer, Ira V. Brown, confirmed Abbott’s importance via “testimonials by the dozen,” and added that Abbott “directly reached several hundred thousands of people” through his work as a “minister, lecturer, author, and editor.”[18] Abbott was “something of a national patriarch” by the time of his death, and according to Brown, he was “no less than a modern oracle” to thousands of followers.[19] Abbott influenced hundreds every week through his sermons at the prestigious Plymouth Avenue Congregationalist Church. He also gave speeches at many American colleges, published several books that sold between five and ten thousand copies, and edited the Outlook that, at its peak, sold “about 125,000 copies a week.”[20] The magazine "was a prominent news source for Protestant ministers and laypeople all over the United States, demonstrating Abbott's lasting influence."[21]

Retrieved from "http://en.turkcewiki.org/w/index.php?title=Lyman_Abbott&oldid=979501226"
This website is a mirror of Wikipedia, and is not affiliated with the Wikimedia Foundation.
Categories:
Hidden categories: