Lushootseed (also: xʷəlšucid, dxʷləšúcid, Puget Salish, Puget Sound Salish or Skagit-Nisqually) is a language made up of a dialect continuum of several Salish tribes of modern-day Washington state. Lushootseed is one of the Coast Salish languages. The latter is one of two main divisions of the Salishan language family.

Lushootseed has a complex consonantal phonology and 4 vowel phonemes. Along with more common voicing and labialization contrasts, Lushootseed has a plain-glottalic contrast, which is realized as laryngealized with sonorants, ejective with voiceless stops or fricatives.

Lushootseed can be considered a relatively agglutinating language, given its high number of morphemes, including a large number of lexical suffixes. Word order is fairly flexible, however, it is generally considered to be verb-subject-object (VSO).[5]

Lushootseed is capable of creating grammatically correct sentences that contain only a verb, with no subject or object. All information beyond the action is to be understood by context. This can be demonstrated in ʔuʔəy’dub '[someone] managed to find [someone/something]'.[6] Sentences which contain no verb at all are also common, as Lushootseed has no copula. An example of a sentence like this is stab əẃə tiʔiɫ 'What [is] that?'.[7]

Despite its general status as VSO, Lushootseed can be rearranged to be subject-verb-object (SVO) and verb-object-subject (VOS). Doing so does not modify the words themselves, but requires the particle ʔə to mark the change. The exact nature of this particle is the subject of some debate.

Prepositions in Lushootseed are almost entirely handled by one word, ʔal, which can mean ‘on, above, in, beside, around’ among a number of potential other meanings. They come before the object they reference, much like in English. Examples of this can be found in the following sentences:

Determiners usually come before a noun they belong to, and have two possible genders “masculine” and “feminine”. However, in a sentence reordered to become SVO, such as sqwəbayʔ ti ʔučalatəb ʔə tiʔiɬ wiw'su ‘The dog is what the children chased’ the determiner for sqwəbayʔ ‘dog’ comes after the noun, instead of before it. Gender primarily manifests in the addition of an -s- within the determiner, generally following immediately after the first letter of the word, i.e. tiʔiɫ ‘that’ becomes tsiʔiɫ, te ‘the, a’ becomes tse, ti ‘this’ becomes tsi,

Lushootseed has four subject pronouns: čəd ‘I’ (1st-person singular), čəɫ ‘we’ (1st-person plural), čəxʷ ‘you’ (2nd-person singular), and čələp ‘you folks’ (2nd-person plural). It does not generally refer to the third person in any way. The subject pronoun always comes in the second position in the sentence. For example dxʷləbiʔ čəxʷ ʔu ‘Are you Lummi?’ as compared to xʷiʔ čəd lədxʷləbiʔ ‘I am not Lummi’. Here, negation takes the first position, the subject pronoun takes the second, and Lummi is pushed to the end of the sentence.[6]

Negation in Lushootseed takes the form of an adverb xʷiʔ 'no, none, nothing' which always comes at the beginning of a sentence that is to be negated. It is constructed in two possible ways, one for negatives of existence, and one for negatives of identity. If taking the form of a negative of identity, a proclitic lə- must be added to the sentences on the next adverb. If there are no further adverbs in the sentence, the proclitic attaches to the head word of the predicate, as in the sentence xʷiʔ čəxʷ sixʷ ləbakʷɬ ' Don't get hurt again'.[6]

Lushootseed, like its neighbour Twana, is in the Southern Coast Salish subgroup of the Salishan family of languages. The language was spoken by many Puget Sound region peoples, including the Duwamish, Steilacoom, Suquamish, Squaxin Island Tribe, Muckleshoot, Snoqualmie, Nisqually, and Puyallup in the south and the Snohomish, Stillaguamish, Skagit, and Swinomish in the north. 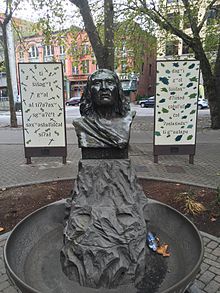 Ethnologue quotes a source published in 1990 (and therefore presumably reflecting the situation in the late 1980s), according to which there were 60 fluent speakers of Lushootseed, evenly divided between the northern and southern dialects.[8] On the other hand, the Ethnologue's list of United States languages also lists, alongside Lushootseed's 60 speakers, 100 speakers for Skagit, 107 for Southern Puget Sound Salish, and 10 for Snohomish (a dialect on the boundary between the northern and southern varieties).[8] Some sources given for these figures, however, go back to the 1970s when the language was less critically endangered. Linguist Marianne Mithun has collected more recent data on the number of speakers of various Native American languages, and could document that by the end of the 1990s there were only a handful of elders left who spoke Lushootseed fluently. The language was extensively documented and studied by linguists with the aid of tribal elder Vi Hilbert, d. 2008, who was the last speaker with a full native command of Lushootseed.[1] There are efforts at reviving the language, and instructional materials have been published.

As of 2013[update], the Tulalip Tribes' Lushootseed Language Department teaches classes in Lushootseed,[9][10] and its website offers a Lushootseed "phrase of the week" with audio.[11] The Tulalip Montessori School also teaches Lushootseed to young children.[12]

As of 2013[update], an annual Lushootseed conference is held at Seattle University.[13] A course in Lushootseed language and literature has been offered at Evergreen State College.[14] Lushootseed has also been used as a part of environmental history courses at Pacific Lutheran University.[1] It has been spoken during the annual Tribal Canoe Journey (Tribal Journeys) that take place throughout the Salish Sea.

There are also efforts within the Puyallup Tribe. Their website and social media, aimed at anyone interested in learning the language, are updated often.[15]

Lushootseed consists of two dialect groups which can be further divided into subdialects:

According to work published by Vi Hilbert and other Lushootseed language specialists, Lushootseed uses a morphophonemic writing system meaning that it is a phonemic alphabet which changes to reflect the pronunciation such as when an affix is introduced. The chart below is based on the Lushootseed Dictionary. Typographic variations such as p' and p̓ do not indicate phonemic distinctions.

See the external links below for resources.

The Lushootseed language originates from the coastal region of Northwest Washington State and the Southwest coast of Canada. There are words in the Lushootseed language which are related to the environment and the fishing economy that surrounded the Salish tribes. The following tables show different words from different Lushootseed dialects relating to the salmon fishing and coastal economies.

Retrieved from "http://en.turkcewiki.org/w/index.php?title=Lushootseed&oldid=929469844"
This website is a mirror of Wikipedia, and is not affiliated with the Wikimedia Foundation.
Categories:
Hidden categories: