Lou Dobbs Tonight is an American editorial commentary and discussion program hosted by Lou Dobbs, which previously broadcast on CNN and is currently broadcast on the Fox Business Network. The hour-long show aired live on evenings every weekday, and was replayed in the overnight/early morning hours. It covered the major news stories of the day with a focus on politics and economics. Field correspondents provided additional reporting and occasionally served as guest anchors. During Dobbs' tenure, notable politicians and economists were often guests on the show. 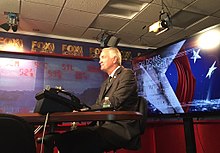 Luther Strange on Lou Dobbs Tonight in May 2017

Lou Dobbs Tonight began with the name Moneyline with the premiere of CNN, and was CNN's main financial show for over 20 years, for a large portion of those years airing on CNN International as well.

In late 1997 Dobbs hired former ABC News and NBC News Executive Producer David Bohrman to turn the program into a more general evening newscast, which would be called The Moneyline NewsHour. The program was half financially focused, and half general news. It was the first regular program at CNN to have its main control room outside of Atlanta.

As the show moved more towards general news and economic and political commentary, it was renamed Lou Dobbs Moneyline and then Lou Dobbs Tonight. The show was among CNN's most watched.[4]

On November 4, 2006, a taped weekend edition of Lou Dobbs Tonight, entitled Lou Dobbs this Week, began airing. The weekend show, which aired every Saturday and Sunday night, discussed a variety of heated issues from the past week and the week ahead. The weekend show has since been canceled.

On November 11, 2009, Lou Dobbs left the network, telling viewers that the night's episode of Lou Dobbs Tonight was his last and that "some leaders in media, politics and business have been urging me to go beyond the role here at CNN". Although he had a contract with CNN until the end of 2011, CNN agreed to release him early.[5][6]

After his resignation, the show was temporarily replaced by CNN Tonight, a news program hosted by John Roberts and later Erica Hill which featured reports filed by reporters who had filed reports for Lou Dobbs' program. On January 15, 2010, CNN Tonight was displaced by The Situation Room in a scheduling shift as a result of the premiere of Rick's List. John King's new program, John King, USA debuted in Lou Dobbs' timeslot on March 22, 2010.

One regular feature on the show was "Exporting America", in which Dobbs documented the American companies that had outsourced jobs to overseas facilities, as well as those businesses that had taken special steps to keep jobs on U.S. soil. Dobbs had compiled a list of companies that had outsourced that he had posted on the show's website and occasionally repeated on the air. Dobbs frequently criticized U.S. international trade policy as insufficiently protecting American jobs, advocating in favor of what many consider to be economic protectionism in contrast to free trade. As part of his criticism of globalization, Dobbs often noted that the United States is running trade deficits with virtually every major trading partner it has, especially China.

Another regular feature was "Broken Borders", which highlighted what Dobbs considered to be the problems and costs associated with illegal immigrants, and the inefficiencies in the U.S. Border Patrol and immigration policies in general.

Around the middle of the show, a daily poll was opened that was answered on the show's website. Voting for the poll continued until the end of the show, when the results of the poll along with some viewer comments were revealed. These polls were often overwhelming in their margins.

Kitty Pilgrim was a correspondent for the program, and the most frequent substitute anchor when Dobbs was not on. Other reporters attached to Lou Dobbs Tonight included Dana Bash, Lisa Sylvester, Bill Tucker, Suzanne Malveaux and Casey Wian. The show was broadcast live from CNN's New York studios, located in the Time Warner Center.

Critics of his broadcast, such as the Southern Poverty Law Center, allege Lou Dobbs Tonight regularly aired segments featuring people that the SPLC considers to be involved with white supremacist groups, particularly as on-air guests, without the show revealing involvement in such groups.[14][15]

Its highest rated show in 2008 was the day after the presidential election - two million viewers. Lou Dobbs Tonight was off by 15 percent between January 26 and February 22, 2009, according to Nielsen Media Research data.[16]

Retrieved from "http://en.turkcewiki.org/w/index.php?title=Lou_Dobbs_Tonight&oldid=971874334"
This website is a mirror of Wikipedia, and is not affiliated with the Wikimedia Foundation.
Categories:
Hidden categories: