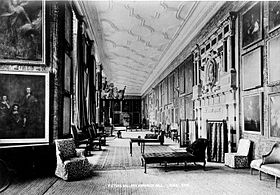 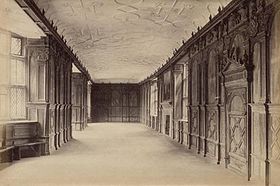 In architecture, a long gallery is a long, narrow room, often with a high ceiling. In Britain, long galleries were popular in Elizabethan and Jacobean houses. They were often located on the upper floor of the great houses of the time, and they stretched across the entire frontage of the building. They served several purposes: they were used for entertaining guests, for taking exercise in the form of walking when the weather was inclement, and for displaying art collections.

Later, long galleries were built in Victorian houses, such as Nottingham Castle.

Notable long galleries in the United Kingdom can be seen at:

Retrieved from "http://en.turkcewiki.org/w/index.php?title=Long_gallery&oldid=946063105"
This website is a mirror of Wikipedia, and is not affiliated with the Wikimedia Foundation.
Categories:
Hidden categories: