London Business School (LBS) is a business school and a constituent college of the federal University of London. LBS was founded in 1964 and awards post-graduate degrees (Master's degrees in management and finance, MBA and PhD). LBS is widely considered to be one of the world's best business schools and its motto is "To have a profound impact on the way the world does business".[3][4][5]

The main campus is located in London next to Regent's Park in Sussex Place, built by the architect John Nash. In 2015, the school acquired the Marylebone Town Hall and spent £60 million to refurbish it with the objective of expanding its teaching facilities by 70%.[9] LBS has also acquired the site of the Royal College of Obstetricians and Gynaecologists, who are due to vacate the building in November 2019.[10] LBS has a secondary campus in Dubai that is dedicated to Executive Education and the Dubai EMBA.[11]

The Sussex Palace, main campus of the London Business School in London

The London Business School was founded in 1964 under the name of the 'London Graduate School of Business Studies', with Dr. Arthur Earle as Dean. In 1965, the school was registered as a company and was designated by the University of London as an institution having recognised teachers. In 1966, the first Executive Development Programme was launched, followed by the Senior Executive Programme. The same year, a full-time MSc degree was also launched, with Sheila Cross enrolling as the School's first female student. In 1968, the School inaugurated the Sloan Fellowship MSc programme, which was the first one outside of the US. 17 students were enrolled and the programme was funded by the Alfred P. Sloan foundation. The first doctoral programme was established in 1969 and in 1970 Her Majesty Queen Elizabeth II opened the School's Regent's Park campus. The first PhD was awarded in 1974, and that year women made up over 15% of the student body for the first time. In 1983, the first part-time MBA programme was held under the direction of Sir Andrew Likierman, a former Dean of the School. In 1986, the school officially became the London Business School and was incorporated by Royal Charter, which gave LBS the right to confer and grant degrees. In 1992, the School was given the Queen's Award for Export in recognition of providing educational services to managers and companies worldwide. The following year, the school started its first Masters in Finance programme and in 2001, the EMBA-Global degree programme in partnership with the Columbia Business School.[12]

In 2007 a new campus was opened in Dubai to offer both Executive MBA and Executive Education Programmes. In 2009, the school started two new programmes: The EMBA-Global Asia, in partnership with the University of Hong Kong and Columbia Business School, and the Masters in Management (MiM). In 2012, the school acquired Marylebone Town Hall and restored it with the objective of expanding its teaching facilities by 70 per cent.[9] The building was renamed "The Sammy Ofer Centre" in honour of a generous donor, the Ofer Family, who made a gift for the development of the building, which was opened in 2017.[13] In 2016, LBS launched a new programme, the Masters in Financial Analysis, aimed at recent graduates who wish to pursue a career in finance, and acquired the lease of the neighbouring building of the Royal College of Obstetricians and Gynaenocologists, which it will occupy in 2020.

With the objective of increasing its size, the school organised a £100 million funding campaign. By the beginning of 2016, it had raised £98 million, £40 million of which will be used to renovate the Marylebone Town Hall, with £28 million for research, £18 million in scholarships for students, £10 million to increase the school's endowment, and £4 million to improve technology across the school.[14] By June 2016, the school had raised £125 million, including two £25 million gifts from alumni Jim Ratcliffe and Idan Ofer.[15]

François Ortalo-Magné, the French-born former Dean of the Wisconsin School of Business, succeeded Sir Andrew Likierman as Dean in August 2017.[16]

The campus is located in Marylebone, on the perimeter of Regent's Park. The main building, designed by John Nash, along with the entire area of Regents Park, was originally built as 26 terraced houses in 1822–23.[17] There are ten pointed cupolas along the roof line, and the façade is adorned with Corinthian columns.

LBS maintains a number of facilities, including a sports centre, restaurant, three cafes and a library, all dedicated for the exclusive use of its community. There is also a privately run pub, 'The Windsor Castle' attached to the campus. Most classrooms for the MBA are located in the Sainsbury Wing, the centre of the terrace, most of which are 100-student amphitheatre rooms.

There is no accommodation on campus for students in full-time programmes, although there are rooms on-campus for visiting faculty and executive education participants. Most students choose to live in nearby private residential buildings or in students halls of residence such as the International Students House, London.

LBS is expanding its campus in central London. The business school has redeveloped the Old Marylebone Town Hall into classrooms and offices as the Sammy Ofer Centre. It will further expand it in 2020 (see above).[18] 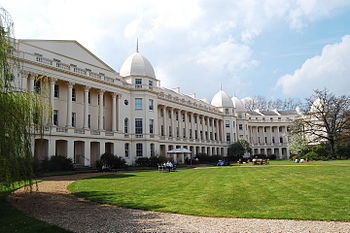 ‹ The template Infobox business school rankings is being considered for merging. ›

All candidates must take international exams related to their English abilities (TOEFL) or IELTS and mathematic/logic skills (GMAT or GRE). Candidates are also asked to write several essays (topics are related to the envisaged programmes). The recruitment process has two steps. The first one consists of sending an application with the following information:[25]

Once the application has been accepted, an examination is made by the selection committee. If the candidate meets the criteria of the school, he/she will be invited for an interview on campus in London. If this latter step is a success, the candidate receives an offer from LBS.

The school's flagship programme is its full-time 15–21-month Master of Business Administration degree. MBA students take a prescribed set of core courses then choose from roughly 70 different electives. Class size has been around 400 students in every annual cohort. These are broken into 5 streams of around 80 students who take all core courses together. The admission process is highly competitive and selective.

Beyond academics, the school puts an emphasis on personal and professional development including leadership, global awareness, and business skill building. These developments are facilitated via specialized workshops led by external consultants, students, and faculty. In addition to a range of elective courses at the London Business School, the school has partnerships with around 32 exchange schools around the world. Each academic year around 100 students spend a term at another leading business school.

The school offers four Executive (part-time) MBA degrees, which are completed in 16–20 months. At an academic level, the school offers the same degree to both Executive (part-time) and full-time MBA students. The programmes involve very similar core courses to the full-time MBA, international field work and a wide range of elective courses. The course ends with a capstone together with company project or management report.

Sloan Masters in Leadership and Strategy[edit]

The Sloan Fellowship was established in 1968 and is a master's degree programme designed for senior executives, accomplished professionals and entrepreneurs with significant experience of decision-making at strategic levels.[36] The admission process is highly competitive and selective. On average, Sloan Fellows already have 15 years of management experience when being admitted to the programme. A typical class is highly diverse and includes attendees from 13–23 different countries.[37]

This 12-month, full-time master's degree programme focuses on strategy, leadership and change, and globalisation. The Sloan programme is also offered at Stanford Graduate School of Business and the MIT Sloan School of Management.

The Masters in Financial Analysis is the most recent programme offered by the London Business School, starting in September 2016 and consists of 12 months of courses. The programme targets recent graduates with less than a year of work experience who plan to start a career in finance, typically as an analyst in an investment bank or in consulting. The curriculum consists of 10 core courses based on 5 pillars (Accounting, Corporate Finance, Asset Management, Market Finance, and Financial Econometrics). The 10 courses are:[39]

Students must also complete three electives of which a minimum of two must be related to finance.[40] The programme includes a business immersion week within a company (Google, Deloitte, CNN, Accenture, Blackrock etc.) to work on case studies.[41] Finally, students participate in a Field Trip (study trip) that lasts a week. This travel experience consists of many networking dinners, company visits, and company presentations. The following destinations are available: Silicon Valley, Paris, Milan and Munich, Mumbai and Bangalore, or Shanghai.[42]

The Masters in Management (MiM) is a one-year masters degree in management aimed at recent graduates who have less than one year of full-time postgraduate corporate work experience or less than two years of experience in a non-traditional business role.

The programme is structured in 3 terms, composed of the following core courses:[43]

Students must also follow 2 electives and can choose among 30 different courses.[44] The programme includes a business immersion week within a company (Google, Deloitte, CNN, Accenture, Blackrock etc.) to work on case studies.[45] Finally, students have to participate in a Field Trip (study trip) that lasts a week. This travel experience consists of many networking dinners, company visits, and company presentations. The following destinations are available: Silicon Valley, Paris, Milan and Munich, Mumbai and Bangalore, or Shanghai.[46]

In 2018 & 2019 the programme was ranked 3rd in the world by the Financial Times, having been in the global top 10 since it became eligible for the ranking.[47][48][49][50][51][52] The programme has a very good market placement. 96% of the 2015 graduates accepted an offer within three months of graduation. 40% work in consulting, 35% in finance and the rest in different industries. The most prestigious companies recruit on campus. The top 3 recruiters are the Boston Consulting Group (11 students hired in 2015), Goldman Sachs (8 students hired in 2015), and McKinsey & Company (7 students hired in 2015). Among the other companies that recruited 2 MiM students or more in 2015 are, for example, Oliver Wyman, Arthur D. Little, Deloitte, A.T. Kearney, and Bain & Company.[53]

Delivered jointly by London Business School and the renowned Fudan School of Management in Shanghai, the Global MiM gives an unparalleled grounding in international business challenges preparing for the opportunities of tomorrow.

About 10,000 executives attend the school's non-degree programmes each year. The school offers a portfolio of 31 Executive Education programmes in general management, strategy, leadership, marketing, human resources and finance. [54] These programmes are split into two main areas, open and custom. About 45 companies per year commission London Business School to design and deliver customised corporate programmes for them, 60% of which are delivered outside the UK.

In the 2015 QS ranking of world business schools (all academic programs), LBS came in 1st place, ahead of Harvard and INSEAD.[55] In the 2014 Eduniversal Business School Ranking, LBS was ranked 2nd in the world. In the 2016 Bloomberg Businessweek ranking, LBS was named best international school.[56]

In 2017, the school was awarded 1st place in the 2-year international MBA ranking by Forbes for the 5th consecutive year, with the return on investment being the highest of any 2-year MBA in the world.[57]

LBS and its programmes are often ranked among the best in the world and in Europe. According to Financial Times rankings it is:[58][52][47]

The school's 150 faculty work through 16 research centres or institutes.[59] According to the 2014 Research Excellence Framework, the school had the joint highest percentage of world-leading research of any British higher education institution (along with the Courtauld Institute of Art) with 56% of research rated in the 4* category.[60]

There are over 70 student clubs at the school. These range from professional clubs such as consulting, entrepreneurship and energy clubs, to regional clubs including the Latin American and China club. There are also general interest and sporting clubs such as football, wine and cheese and the salsa club.[62]

The London Business School has 39,000 alumni in more than 150 countries. Many local clubs (Paris, New-York, Zurich etc.) organise recurrent events in their city.[67]

Retrieved from "http://en.turkcewiki.org/w/index.php?title=London_Business_School&oldid=947944977"
This website is a mirror of Wikipedia, and is not affiliated with the Wikimedia Foundation.
Categories:
Hidden categories: