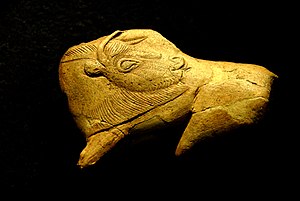 This is a descriptive list of Stone Age art, the period of prehistory characterised by the widespread use of stone tools. This page contains, by sheer volume of the artwork discovered, a very incomplete list of the works of the painters, sculptors, and other artists who created what is now called prehistoric art. For fuller lists see Art of the Upper Paleolithic, Art of the Middle Paleolithic, and Category:Prehistoric art and its many sub-categories.

The oldest undisputed figurative art appears with the Aurignacian, about 40,000 years ago, which is associated with the earliest presence of Cro-Magnon artists in Europe. Figurines with date estimates of 40,000 years are the so-called Lion-man and Venus of Hohle Fels, both found in the Southern Germany caves of the Swabian Jura. 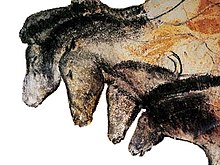 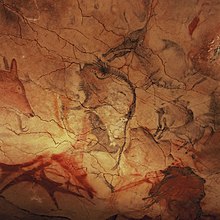 The Gravettian spans the Last Glacial Maximum, ca. 33–21 kya. The Solutrean (c. 22–17 kya) may or may not be included as the final phase of the Gravettian.

A 16,000-year-old masterwork from the Lascaux cave in France 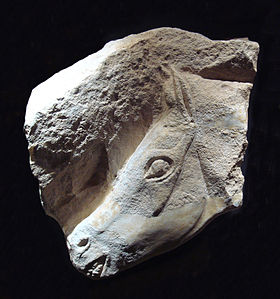 Swimming Reindeer, a 13,000-year-old mammoth-tusk sculpture now residing in the British Museum, depicts a female on the right and a male on the left. 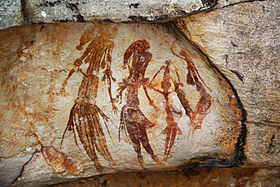 Australia and parts of Southeast Asia remained in the Paleolithic stage until European contact. The oldest firmly dated rock-art painting in Australia is a charcoal drawing on a rock fragment found during the excavation of the Nawarla Gabarnmang rock shelter in south western Arnhem Land in the Northern Territory. Dated at 28,000 years, it is one of the oldest known pieces of rock art on Earth with a confirmed date. 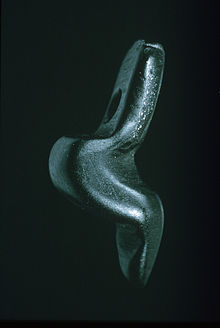 Near East and North Africa

Retrieved from "http://en.turkcewiki.org/w/index.php?title=List_of_Stone_Age_art&oldid=976541020"
This website is a mirror of Wikipedia, and is not affiliated with the Wikimedia Foundation.
Categories:
Hidden categories: