Map of host cities and countries of the modern summer (orange) and winter (blue) Olympics. Tap or hover over a city to show its name.

This is a list of host cities of the Olympic Games, both summer and winter, since the modern Olympics began in 1896. Since then, summer and winter games have usually celebrated a four-year period known as an Olympiad; summer and winter games normally held in staggered even years. There have been 28 Summer Olympic Games held in 23 cities, and 23 Winter Olympic Games held in 20 cities. In addition, three summer and two winter editions of the Games were scheduled to take place but later cancelled due to war: Berlin (summer) in 1916; Tokyo–Helsinki (summer) and Sapporo–Garmisch-Partenkirchen (winter) in 1940; and London (summer) and Cortina (winter) in 1944. The 1906 Intercalated Olympics were officially sanctioned and held in Athens. However, in 1949, the International Olympic Committee (IOC), decided to unrecognize the 1906 Games.[1][2] The 2020 Summer Olympics in Tokyo were postponed for the first time in Olympics history to summer 2021 due to the COVID-19 pandemic with the 2022 Winter Olympics being held roughly six months later in Beijing.[3][4]

The Youth Olympic Games are held every four years in staggered summer and winter events consistent with the current Olympic Games format, though in reverse order with Winter Games held in leap years instead of Summer Games. The first summer version was held in Singapore from 14 to 26 August 2010 while the first winter version was held in Innsbruck, Austria from 13 to 22 January 2012.[5]

The Games have primarily been hosted in the continents of Europe (32 editions) and Americas (14 editions); seven Games have been hosted in Asia and two have been hosted in Oceania. In 2010, Singapore became Southeast Asia's first Olympic host city for the inaugural Summer Youth Olympics, while Rio de Janeiro became South America's first Olympic host city with the 2016 Summer Olympics, followed by Buenos Aires with the 2018 Summer Youth Olympics. The 2022 Summer Youth Olympics in Dakar will become the first-ever Games to be held on the African continent. Other major geographic regions which have never hosted the Olympics include the Middle East, Central Asia, the Indian subcontinent, Central America and the Caribbean.

Host cities are selected by the IOC membership, usually seven years in advance.[6] The selection process lasts approximately two years. In the first stage, any city in the world may submit an application to become a host city. After 10 months, the Executive Board of the IOC decides which applicant cities will become official candidates as based on the recommendation of a working group that reviews the applications. In a second stage, the candidate cities are investigated thoroughly by an Evaluation Commission, which then submits a final short list of cities to be considered for selection. The host city is then chosen by vote of the IOC session, a general meeting of IOC members.[7]

Number of Olympic Games by country[edit] 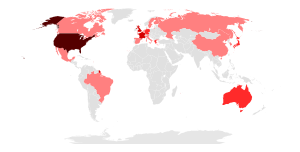 Nations that have hosted or will host the Summer Olympics 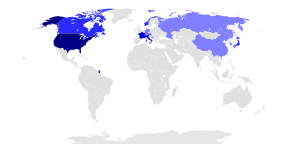 Nations that have hosted or will host the Winter Olympics

Number of Olympic Games by continent[edit]

Retrieved from "http://en.turkcewiki.org/w/index.php?title=List_of_Olympic_Games_host_cities&oldid=979877545"
This website is a mirror of Wikipedia, and is not affiliated with the Wikimedia Foundation.
Categories:
Hidden categories: