Jump to navigation Jump to search
Not to be confused with the fabric linen.

Linens are fabric household goods intended for daily use, such as bedding, tablecloths and towels. "Linens" may also refer to church linens, meaning the altar cloths used in church. 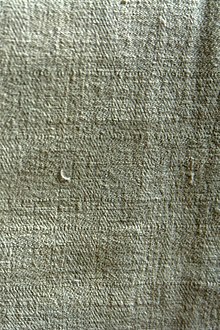 A close-up of the texture of hand-woven linen fabric made in the early 20th century in the Balkans. 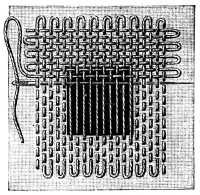 An illustration of how to darn linen, from the Encyclopedia of Needlework (1884) by Thérèse de Dillmont. 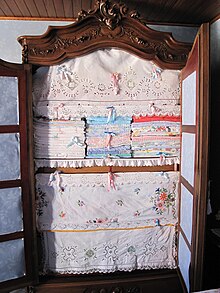 A French armoire with home linens arranged in a traditional manner, with embroidered dust covers over the shelves.

The earliest known household linens were made from thin yarn spun from flax fibres to make linen cloth. Ancient Egypt, Babylon, and Phoenicia all cultivated flax crops. The earliest surviving fragments of linen cloth have been found in Egyptian tombs and date to 4000 BCE. Flax fibres have been found in cloth fragments in Europe that date to the Neolithic prehistoric age.[1]:76

Cotton is another popular fibre for making cloth used for household linens. Its use in cloth-making also dates back to prehistoric times, in Indian subcontinent, China, Peru and Egypt. The Indian subcontinent was especially well known for high quality cotton cloth as early as 1500 BCE.[1]:66

Linen was an especially popular cloth during the Middle Ages in Europe, when cotton was an exotic import. It was used for underclothing, chemises, shifts, shirts and blouses, in fact most clothing worn next to the skin, by those able to afford an extra layer of clothing. The tradition of calling household fabric goods "linens" dates from this period,[1]:76 but meant clothing as much as large sheets. According to medieval tradition, which survived up until the modern era, a bride would often be given a gift of linens made by the women in her family as a wedding present, to help her set up her new married home. In France this was called a trousseau, and was often presented to the bride in a wooden hope chest.

The Industrial Revolution brought huge changes to cloth manufacturing. The rise of European colonialism at the same time helped support the rapid growth of cloth production by creating many cheap sources of raw materials. British cloth manufacturers would import raw cotton from America and the British West Indies to Ireland, where it would be spun into yarn. The yarn would be imported into England, where mechanized factories employed thousands of workers, who would weave cloth on industrial looms. In 1781, a cloth producer from Manchester testified about his business to a committee of the House of Commons in the British Parliament. He stated that he employed 6000 workers, who would print and stamp 60,000 yards of cotton and linen fabric a year.[2] Cotton gradually replaced linen for most uses in clothing, but remained preferred for bedsheets and tablecloths. Other European countries manufactured and traded their own types of household linens as well, and mass manufacturing techniques and trade competition gradually made affordable household linens common.

Today, the term "linen" is still used for bedsheets, tablecloths and similar household textiles, even though most are made of cotton, synthetic fabrics, or blends. Especially in American English, they may be called "white goods", otherwise a term for kitchen major appliances.

Cleaning and storage of linens[edit]

Cleaning household linens is done as appropriate to the type of cloth. Household linens are most likely to have stains from organic sources such as food, blood, and soil. If the linens are made of natural fibres such as linen or cotton, the cloth will need to be rinsed as soon as possible in cold water to prevent the stain from becoming permanent. Stains from red wine, or red or purple berries and fruit are an exception and must be washed in boiling water,[3]:97 yet despite this, these stains may be impossible to remove. Otherwise, regular washing of household linens should be done in hot water for hygienic reasons, to destroy bacteria left on the linens from frequent use. Linen and cotton that are white may also become yellow over time, but this is eliminated by bleaching, either with liquid bleach, or by the traditional method of hanging the linens in the sun to let the sunlight bleach out the discoloration.[3]:94

Household linens are stored near the area where they are used, when possible, for convenience. Otherwise, bed and kitchen and dining linens may be stored together in a linen closet or cupboard. There are many methods of folding linens for storage. For formal occasions, table linens may be ironed before use. Traditionally, table linens could be starched while ironing, to decrease wrinkling and retain a smooth, pristine appearance. Seasonal storage of linens led to the development of natural pest control methods in Europe to prevent moth larvae and other insects or rodents from eating the cloth. Sachets made of dried Margosa (neem), cloves, lavender, and other herbs are traditional, as are cedar wood chips.[4]:133

Industrial laundries were developed in the Middle Ages, when large convents and monasteries used their own facilities. Hospitals and boarding schools followed this example. Today, there are several types of industrial laundries. Hospitals often use laundry chutes to collect used linens. These are transported to an industrial laundry, where they are sorted into three categories: regularly soiled, infected, or staff uniforms. They are laundered as appropriate, usually at high temperatures, to ensure that viruses, bacteria, and soil are cleaned and that the linens are hygienic before being returned to the hospital.[4]:138

In India, Dhobi ghats provide laundry service to both institutions and households. Household linens and clothing are both collected on a fixed day of the week by the Dhobi, who washes the laundry at a ghat, which is often in a large Dhobi ghat zone where many Dhobis work at their own stall. Each stall is approximately four square metres. Laundry is washed in large tubs, rinsed, cleaned by beating on a stone made for the purpose, and then the linens are hung on lines to dry. Industrial linens are treated in steamers for several hours for hygienic reasons. Dhobis also iron linens.[4]:142

The collecting and restoring of antique linens can be complex, depending upon the condition of the cloth. Many old household linens were stored filled with starch, which damages the cloth over time since it hardens and causes wearing and tears in the fabric where it is folded and creased.[5] The owner of an antique linen must determine if conserving, repairing, or mending are appropriate.[6]

Types of antique linens may be identified by the place where they were made. Some well-known locations for making heirloom-quality household linens include Ireland, for its Irish linen and lace, and Madeira, known for a type of linen called Madeira cloth. The type of embellishment on the linens may make them collectable, especially embroidery, including Victorian-era redwork and bluework, which use only red or blue thread. Lace embellishments on linens also make them collectable, such as Battenberg lace.

January "White sales" have been a custom in the United States since the late 19th century. White sales are held by department stores to sell household linens, bedding and towels, at a price discount. The sales are called "White sales" since the sales started during an era when these items were only available in white.

Church linens are used in some Christian churches, with the Roman Catholic Church having perhaps the most elaborate use of them. Linens are used to represent the sacred nature of the altar and to protect the Eucharist. Church linens include:

Retrieved from "http://en.turkcewiki.org/w/index.php?title=Linens&oldid=939023578"
This website is a mirror of Wikipedia, and is not affiliated with the Wikimedia Foundation.
Categories: