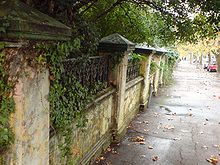 An example of lateral earth pressure overturning a retaining wall

earth pressure is the pressure that soil exerts in the horizontal direction. The lateral earth pressure is important because it affects the consolidation behavior and strength of the soil and because it is considered in the design of geotechnical engineering structures such as retaining walls, basements, tunnels, deep foundations and braced excavations.

The earth pressure problem dates from the beginning of the 18th century, when Gautier[1] listed five areas requiring research, one of which was the dimensions of gravity-retaining walls needed to hold back soil. However, the first major contribution to the field of earth pressures was made several decades later by Coulomb[2], who considered a rigid mass of soil sliding upon a shear surface. Rankine[3] extended earth pressure theory by deriving a solution for a complete soil mass in a state of failure, as compared with Coulomb's solution which had considered a soil mass bounded by a single failure surface. Originally, the Rankine's theory considered the case of only cohesionless soils. However, this theory has subsequently been extended by Bell[4] to cover the case of soils possessing both cohesion and friction. Caquot and Kerisel [6] modified Muller-Breslau's equations to account for a nonplanar rupture surface.

The coefficient of lateral earth pressure[edit]

There are many theories for predicting lateral earth pressure; some are empirically based, and some are analytically derived.

In this article, the following variables in the equations are defined as follows:

The in situ lateral pressure of soil is called earth pressure at rest and it is generally calculated by the product of the overburden stress times the coefficient K0; the latter is called the coefficient of earth pressure at rest. K0 can be obtained directly in the field based on e.g. the dilatometer test (DMT) or a borehole pressuremeter test (PMT), although it is more commonly calculated using the well-known Jaky's formula. For loosely deposited sands at rest, Jaky[5][6] showed analytically that Ko deviates from unity with downward trend as the sinusoidal term of the internal friction angle of material increases, i.e.

From the purely theoretical point of view, the very simple

formula, works ideally for the two extreme values of

referring to hydrostatic conditions and for

referring to a frictional material that can stand vertically without support, thus, exerting no lateral pressure. These extreme cases are enough evidence that the correct expression for the coefficient of earth pressure at rest is the

There is a general impression that Jaky's (1944) coefficient of earth pressure at rest is empirical and, indeed, the

expression is just a simplification of the expression below:

However, the latter derives from a fully analytical procedure and corresponds to an intermediate state between the state at rest and the active state (for more information see Pantelidis[13]).

As mentioned earlier, according to the literature, Jaky's

equation matches very well the experimental data for both normally consolidated sands and clays. Some researchers state, however, that slightly modified forms of Jaky's equation shows better fit to their data. However, although some of these modifications gained great popularity, they do not provide better estimation for

. For example, Brooker and Ireland's[14]

has been based on the laboratory determination of

of only five samples, whilst the effective angle of shearing resistance of the three of them was obtained from the literature, having no control on them. Moreover, refinements in the order of a few percentage points rather support the validity of the

expression than the superiority of the refined expression.

The latter requires the OCR profile with depth to be determined. OCR is the overconsolidation ratio and

is the effective stress friction angle.

Pantelidis[13] offered an analytical experssion for the coefficient of earth pressure at rest, applicable to cohesive-frictional soils and both horizontal and vertical pseudo-static conditions, which is part of a unified continuum mechanics approach (the expression in question is given in the section below).

Different types of wall structures can be designed to resist earth pressure.

Rankine's theory, developed in 1857,[3] is a stress field solution that predicts active and passive earth pressure. It assumes that the soil is cohesionless, the wall is non-battered and frictionless whilst the backfill is horizontal. The failure surface on which the soil moves is planar. The expressions for the active and passive lateral earth pressure coefficients are given below.

Note that c' and φ' are the effective cohesion and angle of shearing resistance of the soil respectively. For cohesive soils, the depth of tension crack (referring to the active state) is:

For purely frictional soils with sloping backfill exerting pressure on non-battered, frictionless wall the coefficients are:

with horizontal components of earth pressure:

where, β is the backfill inclination angle.

Coulomb (1776)[2] first studied the problem of lateral earth pressures on retaining structures. He used limit equilibrium theory, which considers the failing soil block as a free body in order to determine the limiting horizontal earth pressure. The limiting horizontal pressures at failure in extension or compression are used to determine the Ka and Kp respectively. Since the problem is indeterminate,[17] a number of potential failure surfaces must be analysed to identify the critical failure surface (i.e. the surface that produces the maximum or minimum thrust on the wall). Coulombs main assumption is that the failure surface is planar. Mayniel (1908)[18] later extended Coulomb's equations to account for wall friction, denoted by δ. Müller-Breslau (1906)[19] further generalized Mayniel's equations for a non-horizontal backfill and a non-vertical soil-wall interface (represented by angle θ from the vertical).

Instead of evaluating the above equations or using commercial software applications for this, books of tables for the most common cases can be used. Generally instead of Ka, the horizontal part Kah is tabulated. It is the same as Ka times cos(δ+θ).

The actual earth pressure force Ea is the sum of the part Eag due to the weight of the earth, a part Eap due to extra loads such as traffic, minus a part Eac due to any cohesion present.

Eag is the integral of the pressure over the height of the wall, which equates to Ka times the specific gravity of the earth, times one half the wall height squared.

In the case of a uniform pressure loading on a terrace above a retaining wall, Eap equates to this pressure times Ka times the height of the wall. This applies if the terrace is horizontal or the wall vertical. Otherwise, Eap must be multiplied by cosθ cosβ / cos(θ − β).

Eac is generally assumed to be zero unless a value of cohesion can be maintained permanently.

Eag acts on the wall's surface at one third of its height from the bottom and at an angle δ relative to a right angle at the wall. Eap acts at the same angle, but at one half the height.

In 1948, Albert Caquot (1881–1976) and Jean Kerisel (1908–2005) developed an advanced theory that modified Muller-Breslau's equations to account for a non-planar rupture surface. They used a logarithmic spiral to represent the rupture surface instead. This modification is extremely important for passive earth pressure where there is soil-wall friction. Mayniel and Muller-Breslau's equations are unconservative in this situation and are dangerous to apply. For the active pressure coefficient, the logarithmic spiral rupture surface provides a negligible difference compared to Muller-Breslau. These equations are too complex to use, so tables or computers are used instead.

Mononobe-Okabe's[20][21] and Kapilla's[22] earth pressure coefficients for dynamic active and passive conditions respectively have been obtained on the same basis as Coulomb's solution. These coefficeints are given below:

with horizontal components of earth pressure:

are the seismic coefficients of horizontal and vertical acceleration respectively,

is the back face inclination angle of the structure with respect to vertical,

is the angle of friction between structure and soil and

is the back slope inclination.

The above coefficients are included in numerous seismic design codes worldwide (e.g., EN1998-5[23], AASHTO[24]), since being suggested as standard methods by Seed and Whitman.[25] The problems with these two solutions are known (e.g., see Anderson[26]]) with the most important one being the square root of negative number for

The various design codes recognize the problem with these coefficients and they either attempt an interpretation, dictate a modification of these equations, or propose alternatives. In this respect:

It is noted that the above empirical corrections on

made by AASHTO[24] and the Building Seismic Safety Council[27] return coefficients of earth pressure very close to those derived by the analytical solution proposed by Pantelidis[13] (see below).

Mazindrani and Ganjale[29] presented an analytical solution to the problem of earth pressures exerted on a frictionless, non-battered wall by a cohesive-frictional soil with inclined surface. The derived equations are given below for both the active and passive states:

with horizontal components for the active and passive earth pressure are:

ka and kp coefficients for various values of

can be found in tabular form in Mazindrani and Ganjale[29].

Based on a similar analytical procedure, Gnanapragasam[30] gave a different expression for ka. It is noted, however, that both Mazindrani and Ganjale's and Gnanapragasam's expressions lead to identical active earth pressure values.

Following either approache for the active earth pressure, the depth of tension crack appears to be the same as in the case of zero backfill inclination (see Bell's extension of Rankine's theory).

Pantelidis[13] offered a unified fully analytical continuum mechanics approach (based on Cauchy's first law of motion) for deriving earth pressure coefficients for all soil states, applicable to cohesive-frictional soils and both horizontal and vertical pseudo-static conditions.

The following symbols are used:

are the seismic coefficients of horizontal and vertical acceleration respectively

parameters, can be obtained either analytically or through relevant charts; see Pantelidis[13])

are the effective elastic constants of soil (i.e. the Young modulus and Poisson's ratio respectrively)

is the wall height

is the depth where the earth pressure is calculated

The coefficient of earth pressure at rest[edit]

The coefficient of active earth pressure[edit]

The coefficient of passive earth pressure[edit]

The coefficient of intermediate earth pressure on the active "side"[edit]

The coefficient of intermediate earth pressure on the passive "side"[edit]

). The latter is given below.

for smooth retaining wall and

for the active and passive "side" respectively.

The depth of neutral zone in the state at rest is:

whilst the depth of tension crack in the active state is:

=0), where the mobilized cohesion,

, is equal to the cohesion value at the critical state,

, the above expression is transformed to the well-known:

Actually, this has been foreseen in EM1110-2-2502[31] with the application of a Strength Mobilization Factor (SMF) to c′ and tanφ′. According to this Engineer Manual, an appropriate SMF value allows calculation of greater-than-active earth pressures using Coulomb's active force equation. Assuming an average SMF value equal to 2/3 along Coulomb's failure surface, it has been shown that for purely frictional soils the derived coefficient value of earth pressure matches quite well with the respective one derived from Jaky's

In the solution proposed by Pantelidis[13], the SMF factor is the

) pair of values in place of the (

) pair of values in the coefficient of active earth pressure (

) pair of values in place of the (

) pair of values and

=0 in the coefficient of active earth pressure (

Retrieved from "http://en.turkcewiki.org/w/index.php?title=Lateral_earth_pressure&oldid=962765245"
This website is a mirror of Wikipedia, and is not affiliated with the Wikimedia Foundation.
Categories:
Hidden categories: