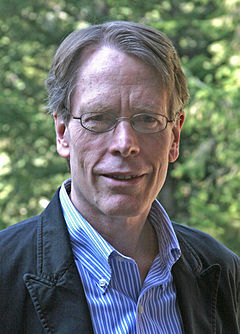 Lars Peter Hansen (born 26 October 1952 in Urbana, Illinois[2]) is an American economist. He is the David Rockefeller Distinguished Service Professor of economics at the University of Chicago and a 2013 recipient of the Nobel Memorial Prize in Economics.[3][4]

Hansen is best known for his work on the Generalized Method of Moments, he is also a distinguished macroeconomist, focusing on the linkages between the financial sector and the macroeconomy. His current collaborative research develops and applies methods for pricing the exposure to macroeconomic shocks over alternative investment horizons and investigates the implications of the pricing of long-term uncertainty.

Among other honors, he received the 2010 BBVA Foundation Frontiers of Knowledge Award[5] in the category of Economy, Finance and Management.

After graduating from Utah State University (B.S. Mathematics, Political Science, 1974) and the University of Minnesota (Ph.D. Economics, 1978) he served as assistant and associate professor at Carnegie Mellon University before moving to the University of Chicago in 1981. He is currently the David Rockefeller Distinguished Service Professor in Economics, Statistics and the College at the University of Chicago. He is married to Grace Tsiang (Chinese: 蒋人瑞; pinyin: Jiǎng Rénruì), who is the daughter of the famous economist Sho-Chieh Tsiang. Together, Hansen and Tsiang have one son named Peter.[6] He has two brothers, Ted Howard Hansen, an immunologist at Washington University in St. Louis and Roger Hansen, an engineer in water resource management. His father, Roger Gaurth Hansen, served as provost of Utah State University and was a professor of biochemistry.

Hansen is best known as the developer of the econometric technique generalized method of moments (GMM) and has written and co-authored papers applying GMM to analyze economic models in numerous fields including labor economics, international finance, finance and macroeconomics. This method has been widely adopted in economics and other fields and applications where fully specifying and solving a model of a complex economic environment is unwieldy or inapplicable. Hansen showed how to exploit moment conditions (e.g. relations where conditional expectations are known to be zero at true parameter values) to construct reasonable, reliable estimators (i.e. having desirable statistical properties such as consistency, asymptotic normality, and efficiency within the class of all asymptotic normal estimators) with less stringent maintained model assumptions than needed for maximum likelihood estimation (specifically, the technique yields consistent estimates without having to specify the entire density function).

With several coauthors such as Kenneth J. Singleton, Scott F. Richard, and Robert Hodrick, Hansen applied GMM to study models of asset valuation. Together with Ravi Jagannathan he showed that the ratio of any stochastic discount factor's standard deviation to its mean is at least as great as any asset's Sharpe ratio; this result is known as the Hansen–Jagannathan bound. The fact that this often fails in practice due to the Sharpe ratio of risky assets exceeding the ratio of the volatility of the stochastic discount factor to its expectation is known as the equity premium puzzle. Later work focused on the long-run risk-return tradeoff with José Scheinkman and the examination of the term structure of pricing risk shocks in dynamic macroeconomic models through the use of "dynamic valuation decomposition."

Hansen has focused on the difference between risk and uncertainty (also known as Knightian uncertainty) and on the measurement of so-called systemic risk," its role in the 2008 financial crisis,[7] and how it should be contained during the post-Great Recession recovery.[8] He frequently speaks publicly on the need to address uncertainty in the policy-making process.

His contributions and current research interests are outlined in a December 2015 interview appearing in The Region, a publication of the Federal Reserve Bank of Minneapolis.

He is the co-winner of the Frisch Medal with Kenneth Singleton in 1984 for his paper, "Generalized Instrumental Variables Estimation of Nonlinear Rational Expectations Models". [11] For his work in studying the properties of financial markets and macroeconomics, he was the 2006 Erwin Plein Nemmers Prize in Economics recipient. [12] He was recognized for his use of statistical methods in economics by receiving the CME Group-MSRI Prize In Innovative Quantitative Applications in 2008.[13] In 2011, he was awarded the BBVA Foundation Frontiers of Knowledge Award in Economics, Finance, and Management "for making fundamental contributions to our understanding of how economic actors cope with risky and changing environments."[14] He holds honorary doctorates from Utah State University and honorary professorships from HEC Paris and Universidad del Pacífico awarded in 2015. On May 22, 2016, Hansen received an honorary degree from Colby College in Waterville, Maine.[15]

On October 14, 2013, Hansen, with Eugene Fama and Robert Shiller, was awarded the Nobel Memorial Prize in Economic Sciences.[16] The award cited their "empirical analysis of asset prices." His Nobel lecture, "Uncertainty Inside and Outside Economic Models," was delivered on December 8, 2013.[17]

Retrieved from "http://en.turkcewiki.org/w/index.php?title=Lars_Peter_Hansen&oldid=964888782"
This website is a mirror of Wikipedia, and is not affiliated with the Wikimedia Foundation.
Categories:
Hidden categories: