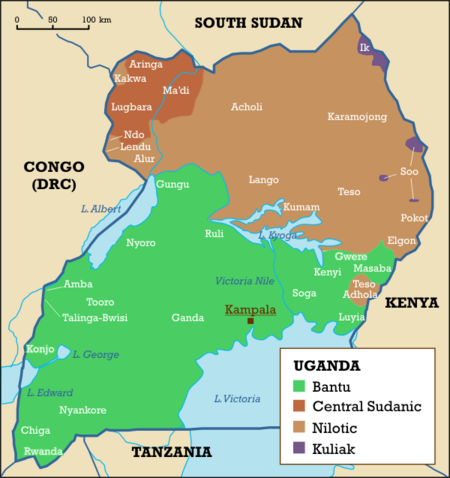 An ethnolinguistic map of Uganda

Uganda is a multilingual country. Forty three of its living languages[1] fall into four main families—Bantu, Nilotic and Central Sudanic—with another two languages in the Kuliak family. Of these, 41 are indigenous and 2 are non-indigenous. Furthermore, 5 are institutional, 27 are developing, 7 are vigorous, 2 are in trouble, and 2 are dying.

English, inherited from the colonial period, is the official language. There is also a Ugandan Sign Language.

In all of the Bantu speaking areas of Uganda, dialect continua are very common. For example, people around Mbarara speak Runyankore and people from Fort Portal in Tooro Kingdom speak Rutooro, but in the area between those towns, there are villages where most of the people speak a dialect that is best characterised as intermediate between Runyankore and Rutooro. In recognition of the closeness of four of these languages (Runyankore, Rutooro, Rukiga and Runyoro), and to facilitate work in them such as teaching, a standardised version called "Runyakitara" was developed around 1990.[citation needed]

In south central Uganda, the Bantu languages of Luganda and Lusoga are largely interintelligible. This dialectic similarity also extends to the Lussese language spoken in the Ssese Islands of Lake Victoria.[2]

Of Nilo-Saharan, the Eastern Sudanic branch is well represented by several Nilotic languages, eastern as well as western. Eastern Nilotic languages include Karamojong of eastern Uganda (population 370,000), the Bari languages in the extreme north-western corner (about 150,000 population) and Teso south of Lake Kyoga (999,537 population). Alur (population 459,000), Acholi, Lango, Adhola and Kuman of eastern Uganda are Western Nilotic Luo languages. (Acholi and Lango are interintelligible, and sometimes the term "Luo" is used to cover them.)

Some southern Nilotic Kalenjin languages are spoken along the border with Kenya, including Pokot and the Elgon languages near Kupsabiny. The eastern Ugandan Kuliak languages Ik and Soo are also members of the Eastern Sudanic branch. Lugbara, Aringa, Ma'di and Ndo of north-western Uganda are languages of the Central Sudanic branch of Nilo-Saharan.

In Uganda, as in many African countries, English was introduced in government and public life by way of missionary work and the educational system. During the first decades of the twentieth century, Swahili gained influence as it was not only used in the army and the police, but was also taught in schools. The Ganda viewed the introduction of Swahili as a threat to their political power and partly through their influence, English remained the only official language at that time.[citation needed]

After independence, there were efforts to choose an indigenous official language, with Swahili and Luganda as the most considered candidates. Although Luganda was the most geographically spread language, people outside Buganda were opposed to having it as a national language,[3] as were those of the Buganda kingdom because they felt other tribes' mispronunciation and grammar errors would ruin their language.[citation needed] English remained the official language.[4]

The native languages of the Ugandan people have influenced Ugandan English.

In 2010, government of Uganda revealed plans to establish a Kiswahili Council to boost the teaching of Swahili language in the country. It was not until September 9, 2019 that the cabinet passed resolution to create the National Kishwahili Council. [5]

The National Swahili Council is meant to guide the planning process, implementation of interventions and allocation of resources to the usage and development of Kiswahili as a Lingua franca-a language that is adopted as a common language between speakers whose native languages are different considering the fact that Uganda is the most ethnically diverse nation.

Retrieved from "http://en.turkcewiki.org/w/index.php?title=Languages_of_Uganda&oldid=962162549"
This website is a mirror of Wikipedia, and is not affiliated with the Wikimedia Foundation.
Categories:
Hidden categories: