Tanzania is a multilingual country. There are many languages spoken in the country, but no one language is spoken natively by a majority or a large plurality of the population. The Bantu, Swahili language and English, the last of which was inherited from colonial rule (see Tanganyika Territory), are widely spoken as lingua francas. They serve as working languages in the country, with Swahili being the official national language.[1] There are more speakers of Swahili than of English in Tanzania.[2] 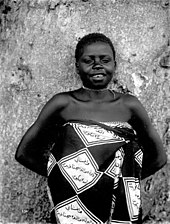 The Bantu Swahili language written in the Arabic script on the clothes of a Tanzanian woman (early 1900s).

According to Ethnologue, there are a total of 126 languages spoken in Tanzania. Two are institutional, 18 are developing, 58 are vigorous, 40 are endangered, and 8 are dying. There are also three languages that recently became extinct.[3]

Most languages spoken locally belong to two broad language families: Niger-Congo (Bantu branch) and Nilo-Saharan (Nilotic branch), spoken by the country's Bantu and Nilotic populations, respectively. Additionally, the Hadza and Sandawe hunter-gatherers speak languages with click consonants, which have tentatively been classified within the Khoisan phylum (although Hadza may be a language isolate). The Cushitic and Semitic ethnic minorities speak languages belonging to the separate Afro-Asiatic family, with the Hindustani and British residents speaking languages from the Indo-European family.[4]

Tanzania's various ethnic groups typically speak their mother tongues within their own communities. The two official languages, English and Swahili, are used in varying degrees of fluency for communication with other populations. According to the official national linguistic policy announced in 1984, Swahili is the language of the social and political sphere as well as primary and adult education, whereas English is the language of secondary education, universities, technology, and higher courts.[5] The government announced in 2015 that it would discontinue the use of English as a language of education as part of an overhaul of the Tanzanian schools system.[6] 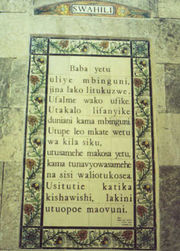 Lord's Prayer in Swahili, a Bantu language that alongside English serves as a lingua franca for many in Tanzania.

Major languages spoken in Tanzania include:

Languages spoken by the country's ethnic minorities include: 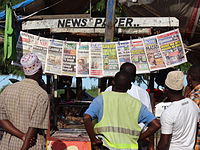 Retrieved from "http://en.turkcewiki.org/w/index.php?title=Languages_of_Tanzania&oldid=963690387"
This website is a mirror of Wikipedia, and is not affiliated with the Wikimedia Foundation.
Categories:
Hidden categories: