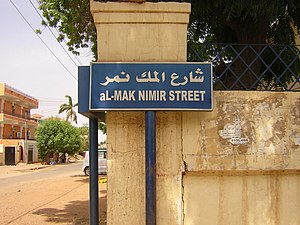 Sudan is a multilingual country dominated by Sudanese Arabic. In the 2005 constitution of the Republic of Sudan, the official languages of Sudan are Literary Arabic and English.

Approximately 114 languages are native to Sudan.

Sudanese Arabic is the most widely spoken language in the country. It is the variety of Arabic spoken throughout northern Sudan. It has much borrowed vocabulary from the local languages (El Rotana)[citation needed]. This has resulted in a variety of Arabic that is unique to Sudan, reflecting the way in which the country has been influenced by both African and Arab cultures. Some of the tribes in Sudan still have similar accents to the ones in Saudi Arabia[citation needed]. Other important languages include Beja (AKA Bedawi) along the Red Sea, with perhaps 2 million speakers; Tigre is another language spoken by some Beja tribes; Fur in the west (Darfur), with perhaps a million speakers; and various Nubian languages along the Nile in the north, with half a million or so speakers. The most linguistically diverse region in the country are the Nuba Hills in Kordofan, inhabited by speakers of multiple language families, with Darfur and the Ethiopian border regions being second.

Beja is the sole Cushitic language in Sudan. Arabic as well as Tigre is Semitic, the Niger–Congo family is represented by many of the Kordofanian languages, and Indo-European by Domari (Gypsy) and English. Historically, Old Nubian, Greek, and Coptic (Egyptian) were the languages of Christian Nubia, and Meroitic the language of the Kingdom of Kush which conquered Egypt.

Sudan also has multiple regional sign languages, which are not mutually intelligible. By 2009 a proposal for a unified language had been worked out, but is not widely known.[1] The most used languages are:

Under the 1998 constitution, only Arabic was the official language.[2]

The 2005 constitution designated Arabic and English as the official languages of Sudan.[3]

As such Sudan is the only country in the Arab world to have English as a co-official language.

Retrieved from "http://en.turkcewiki.org/w/index.php?title=Languages_of_Sudan&oldid=954696078"
This website is a mirror of Wikipedia, and is not affiliated with the Wikimedia Foundation.
Categories:
Hidden categories: