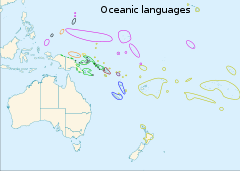 Contact between Austronesian and Papuan resulted in several instances in mixed languages such as Maisin.

Colonial languages include English in Australia, New Zealand, Hawaii, and many other territories; French in New Caledonia and French Polynesia, Japanese in the Bonin Islands; Spanish on Easter Island and Galápagos Islands; and Portuguese in East Timor.

There are also creoles formed from the interaction of Malay or the colonial languages with indigenous languages, such as Tok Pisin, Bislama, Pijin, various Malay trade and creole languages, Hawaiian Pidgin, Norfuk, and Pitkern.

Finally, immigrants brought their own languages, such as Mandarin, Italian, Arabic, Cantonese, Greek and others in Australia,[1] or Fiji Hindi in Fiji.

Retrieved from "http://en.turkcewiki.org/w/index.php?title=Languages_of_Oceania&oldid=918963645"
This website is a mirror of Wikipedia, and is not affiliated with the Wikimedia Foundation.
Categories: