Armenia is an ethnically homogeneous country, in which Armenian is the official language and is spoken as a first language by the majority of its population.

As of today, Russian is still, by far, the best known foreign language among the Armenian population. English is gaining popularity in recent years. French and several other languages have also begun to be studied and used. Kurmanji is the largest minority language of Armenia spoken by the Yazidi minority. Other minority languages recognized by the Armenian government are Assyrian, Greek, and Russian.

The Article 12 of the Constitution of Armenia states that "The state language of the Republic of Armenia is Armenian".[1]

Armenian is a major language used in education, administration and public life.[2] Armenian belongs to an independent branch of the Indo-European language family and uses a unique 36-letter alphabet invented in the 5th century, which since the early 20th century contains 39 letters.

Armenia has been the most successful of the three South Caucasian states (others being Azerbaijan and Georgia) in linguistic de-Russification after the collapse of the Soviet Union.[3] 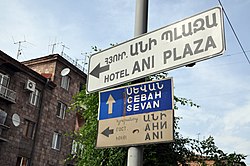 As seen here, most Soviet-era street signs in Yerevan are in Armenian, Russian and (not always) English, while most independence era signs are in Armenian and English

Because of political and historical reasons, Russian is the most common foreign language spoken by the majority of Armenians. English is the second and the fastest growing foreign language in Armenia.[citation needed]

Universities in Russian, English and French exist in the capital city of Armenia, Yerevan. Study courses are available in numerous languages in Armenian universities, most notably the Yerevan State Linguistic University.

Russian is by far the most common foreign language in Armenia. Although its level of competence have significantly decreased since Armenia's independence in 1991,[3] in 2010, the Russian Ministry of Foreign Affairs have reported that about 70% of Armenia's population has the ability to speak Russian.[5] A 1999 study showed that about 40% of the population is fluent in Russian.[6] Russian language television stations (four as of 2003)[7] and newspapers are widely available in Armenia.[3] A 2012 opinion poll showed that 94% of Armenians have basic knowledge of Russian, with 24% having advanced knowledge, 59% intermediate knowledge and 11% having beginner lever knowledge of the language.[8]

The whole area of current Republic of Armenia, was annexed by the Russian Empire in the early 19th century. Since then Russian has been of high significance in the life and history of Armenia. Basically, from 1828 to 1918 and from 1921 to 1991 all official nomenclature was done in Russian, because it was the administrative language of those periods. In the early 20th century, it was estimated that only 3-4% of Armenians could read or speak Russian.[9]

Rapid Russification started during the Soviet period, particularly after Stalin's coming to power in the mid-1930s, when Russian became lingua franca of the Soviet Union.[10] Until 1990 the Russian language was widely applied alongside Armenian.[11] In 1988, nearly 100,000 Armenian students within the republic attended Russian-language schools.[10] Russian was the main language of academic research, although Armenia's constitution has recognized Armenian as the official language. By the 1980s over 90% of Armenia's administrative paperwork was conducted in Russian. A large number of Armenian intelligentsia members sent their children to Russian-language schools,[10] which was considered to be harmful to the future of Armenian.[11]

Since 1991 the situation changed radically, in concern of studying it at secondary and high school as a general subject. In practice, almost at all educational institutions the process of teaching was performed in Armenian, even at Russian departments of colleges and universities. Thus, the Russian language lost its statute of a second mother tongue and was classified as a foreign language. All these factors brought forth changes of the language functioning structure in real time conditions. The absolute number of students of the Russian language was significantly decreased.[12]

The American University of Armenia

The 2001 census revealed 29,563 people with Russian as their native language, from which 14,728 were ethnic Armenians.[13] Many Armenian refugees from Baku and other cities of Azerbaijan only speak Russian.[11]

According to The Gallup Organization's poll, 73% of Armenians in 2006 and 75% in 2007 said that they think it is very important for children in the country to learn Russian.[14]

The popularity of English has been growing since Armenia's independence in 1991. From year to year, more people tend to learn the English language.[16] In contrast to the last decades, the number of Armenian schools teaching English have grown gradually. English is still far behind Russian in terms of knowledge among Armenians. According to a 2012 poll, 40% of Armenians have basic knowledge of English with only 4% having advanced proficiency of English, 16% intermediate and 20% beginner level. However, English is preferable for Armenians than Russian. 50% of Armenians think that English should be taught in public secondary schools compared to 44% preferring Russian.[8]

CNN started broadcasting on regular basis in Armenia in 2002. The Times is available at kiosks.[7]

The American University of Armenia, an affiliate of the University of California, was established in 1991 and offers instruction leading to a master's degree in eight fields of study and teaching English as a foreign language. By offering these programs in English, AUA strives to become accessible to qualified individuals from other countries in the region.[17] 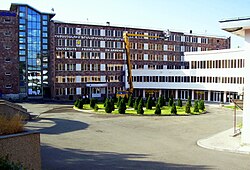 The French University in Armenia

According to the 2011 Armenian Census 107,922 Armenian citizens or 3.6% of Armenia's population can speak English as a second language. 107,002 of the English-second language speakers are ethnic Armenians, the other 920 are of other ethnicities.[15]

Other foreign languages common in Armenia include French, German, Italian, Spanish, Persian. Since 2008 Armenia is an associate member of the Francophonie and became its full member in October 2012.[18] A university named Fondation Université Française en Arménie (French University in Armenia) was founded in 2000 according to the agreement between Armenian and French governments. With 600 students, the UFAR is the largest French university in a non-French speaking country.[19]

Armenian joined the European Charter for Regional or Minority Languages in 2001, which protects the languages of the minorities: Assyrian, Greek, Russian and Northern Kurdish.[3]

Yazidis are the largest minority in Armenia. According to the 2001 census 40,620 people identified themselves as Yazidis and 1,519 as Kurds.[21] The same source showed 31,310 people with Kurdish as their native language.[13] 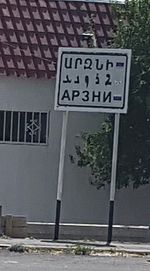 A multilingual (Armenian, Assyrian, Russian) sign at the entrance of Arzni.

Assyrian Neo-Aramaic is spoken by the 3,000-strong Assyrian minority of Armenian.[21]

According to the 2011 Armenian Census there were 2,769 Assyrians in Armenia. There are 2,402 people who speak Assyrian Neo-Aramaic as a first language, 2,265 of the speakers are ethnic Assyrians, while the other 137 speakers are of other ethnicities (125 are ethnic Armenians).[15]

Although Armenian Greeks are mostly multilingual (speaking Greek, Armenian and Russian), the 1,176 strong Greek community has kept the Pontic Greek dialect as their native language.[21]

According to the 2011 Armenian Census there are 900 Greeks in Armenia. In the 1970s the Greek community of Armenia numbered 6,000, but many emigrated to Greece, especially after the fall of the Soviet Union in 1991. Like other small communities, the Greeks of Armenia speak mostly Russian, though many especially of the older generation have the ability to speak Pontic Greek, a Greek dialect, native to the southern shore of the Black Sea (the Black Sea Region of modern-day Turkey). The 2011 Armenian Census did not cite the number of people who speak Greek as a first language, though it can be known that it is more than 733, because Ukrainian was the language with the least number of speakers reported.[15] 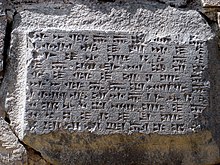 The "birth certificate" of Yerevan in Erebuni Fortress - a cuneiform inscription left by King Argishti I of Urartu on a basalt stone slab about the foundation of the city in 782 BC.

The first language that was recorded to be spoken in the Armenian Highland is the Hurrian language, which was spoken in the Mitanni and parts of the Armenia from around 2300 BC and had mostly vanished by 1000 BC.[22] The Urartian language followed and was spoken by the inhabitants of the ancient kingdom of Urartu that was located in the region of Lake Van, with its capital near the site of the modern city of Van in the Armenian Highland, modern-day Turkey.[23] It is argued on linguistic evidence that proto-Armenian came in contact with Urartian at an early date (3rd-2nd millennium BC), before the formation of the Urartian kingdom.[24][25][26][27][28] It was probably spoken by the majority of the population around Lake Van and in the areas along the upper Zab valley.[29] First attested in the 9th century BCE, Urartian ceased to be written after the fall of the Urartian state in 585 BCE, and presumably it became extinct due to the fall of Urartu.[30] Some speculate it have been replaced by an early form of Armenian,[31][32] although it is only in the fifth century CE that the first written examples of Armenian appear.[33]

Armenian was generally recognized as a separate branch of the Indo-European family, Armenia was considered to be part of the Persian language by western scholars until the 1870s when it was recognized as a separate Indo-European language.[34] Greek and Syriac were the languages of the Armenian Apostolic Church from the day of its creation (301 AD) to 405 AD, when Mesrop Mashtots invented the Armenian alphabet.[34]

Retrieved from "http://en.turkcewiki.org/w/index.php?title=Languages_of_Armenia&oldid=938508630"
This website is a mirror of Wikipedia, and is not affiliated with the Wikimedia Foundation.
Categories:
Hidden categories: