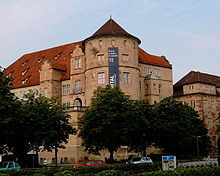 The Landesmuseum Württemberg (Württemberg State Museum) is the main historical museum of the Württemberg part of the German state of Baden-Württemberg. It emerged from the 16th-century “Kunstkammer” (Cabinet of art and curiosities) of the dukes, later kings, of Württemberg who resided in Stuttgart. As a museum it was founded in 1862 by King William I. 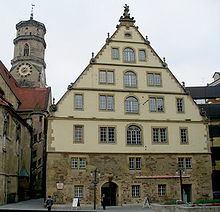 Collections in Stuttgart and Waldenbuch[edit]

The museum's main location is the Old Castle in Stuttgart. The nearby granary and the cellar of the New Castle also contain parts of the collections as well as Waldenbuch Castle outside of Stuttgart.

The collections are grouped into eight divisions:

Apart from these collections the museum regularly features special exhibitions.

The museum presents a whole range of archeological treasures and a notable collection of medieval art. It also includes the inventories of the former army and manufacturing museums. Some of the most valuable possessions of the museum were already acquired by the dukes for their art chamber: two of only four preserved Aztec feather shields from before 1521 and the oldest preserved card game, about 1430, richly decorated and expensive already at the time of production. Exhibits of local origin include a celestial globe of 1493 by Johannes Stöffler, an 11-digit mechanical calculator of 1774 by Philipp Matthäus Hahn (the first to build functional calculators to Gottfried Leibniz' design for all four arithmetic operations), and, probably the museum's most symbolic exhibit despite being similar to other ones: the royal Württemberg crown of 1797. 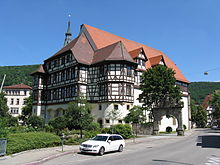 The museum today has a further seven branches throughout Württemberg referring to special topics:

Retrieved from "http://en.turkcewiki.org/w/index.php?title=Landesmuseum_Württemberg&oldid=958235869"
This website is a mirror of Wikipedia, and is not affiliated with the Wikimedia Foundation.
Categories:
Hidden categories: