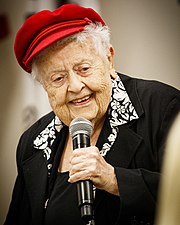 LGBTQ ageing addresses issues and concerns related to the ageing of lesbian, gay, bisexual and transgender (LGBT) people. Older LGBT people are marginalised by: a) younger LGBT people, because of ageism; and b) by older age social networks because of homophobia, biphobia, transphobia, heteronormativity (the assumption that everyone is heterosexual), heterosexism (the privileging of heterosexuality), prejudice and discrimination towards LGBT people.

There has been a growth of interest in lesbian, gay, bisexual and trans (LGBT) ageing in recent years.[1] There is a growing body of academic literature on the subject from the USA,[2] the UK,[3] Australia,[4] Canada,[5] the Netherlands,[6] Israel[7] and Ireland.[8] There is also a number of documents from social policy and campaign organisations, particularly in relation to health and social care issues, for example from the Metlife Mature Market Institute.[9][10]

The earliest waves of research sought ‘to challenge the image of the lonely and bitter old queer’[11] and ‘suggested that older gay men and lesbians are not alone, isolated, or depressed but benefit from navigating a stigmatized identity through crisis competence’,[12] which also informs resilience in dealing with inequalities associated with older age. Subsequent authors questioned the positive bias which may have been present in some of these initial studies.[13] More recent research has focused on health, housing and social care and support needs,[14] older LGBT rights [15] and also the differences between and among older LGBT individuals, particularly in relation to gender.[16] There is a lack of research on black, asian and minority ethnic (BAME) older LGBT individuals, ageing and bisexuality, issues of class and other intersections.[17][18]

Present cohorts of older lesbian, gay and bisexual (LGB) people are more likely to be estranged from their biological families, less likely to have children, and thus less likely to have access to intergenerational social support in later life.[19][20] They may have strong ‘family of friends’ networks, but as these tend to be formed by people of similar ages, when, in older age, they need increased care and support at around the same time, they are then also less likely to be able to provide it to one another.[21] This means that older LGB people are more likely to need formal social care and support sooner, and in greater numbers, than older heterosexual people, particularly, for those in couples, after a partner has died.[22] Older transgender people with children, particularly those who have transitioned in later life, can experience rejection from biological families and so even those with children may lack access to intergenerational support.[23][24]

Mainstream housing and social care provision (domicilary/home care, community care, supported housing, retirement and nursing home facilities) is ill-equipped to meet the needs of older LGBT people.[25] Many older LGBT people currently living in older age accommodation or care spaces try to conceal their lives, identities and significant relationships if they can.[26] They fear being misunderstood, vulnerable to prejudice and discrimination or isolated from their families and friends.[27] They are especially concerned about care if they develop dementia, in terms of 'coming out to care'[28] whether their identities will be respected, their memories validated, and who will be there to speak up for them.[29][30] In response to these issues and concerns a range of good practice guidelines have been developed in the US, for example focussing on cultural competence[31][32] or more practical step-by-step advice,[33] UK,[1] and Australia.[34] However, it is not yet clear how many commissioners and providers of services for older people are following these guidelines, and many older LGBT people continue to consider older age care spaces to be unsafe places in which to spend their final years.[35]

Retrieved from "http://en.turkcewiki.org/w/index.php?title=LGBT_ageing&oldid=1017952650"
This website is a mirror of Wikipedia, and is not affiliated with the Wikimedia Foundation.
Categories: