Jump to navigation Jump to search
For the industrial township in Johannesburg, see Kya Sand.
Place in Gauteng, South Africa

Kya Sands is an informal settlement located in Region A of the City of Johannesburg.[4] 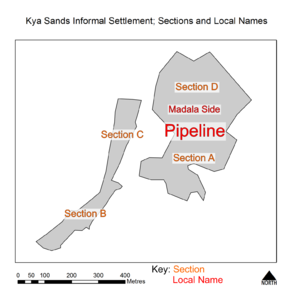 Kya Sands is bisected by the North Riding Stream (or Kya Sand Spruit according to some sources).

The settlement occupies both private and government-owned land, lying on 6 different farm and agricultural holdings.[5] The privately owned sections of the settlement lie on the western side of the stream. City of Johannesburg owned land includes sections immediately adjacent to the stream and the property containing the old Randburg Landfill site (Houtkoppen 193-IQ ptn. 46). Portion 51 of the same farm (Houtkoppen I93-IQ), on which a large portion of the settlement lies, is owned by South African National Government and administered by the Gauteng Provincial Government.[5]

Kya Sands gets its name from the adjacent industrial area, Kya Sand. Other popular names for the settlement include Dumping and Kya Centre. The settlement is also referred to as Kya Sand, Phomolong and Kya Junction by some residents.[6]

Kya Sands is made up of a number of sections. The settlement is broken down firstly into Sections A to D. These are defined by government and are used in counting and numbering houses and toilets in the settlement.[6]

Other sections include Pipeline, the whole section of the settlement east of the river, and Madala Side, the northern part of Pipeline.[6]

While the exact year of the settlement's formation is disputed, indications are that it started in the early 1990s.[6][7] Informal houses were initially set up in the area by subcontractors working at the adjacent (now closed) Randburg Landfill site and the Kya Sand and Hoogland industrial areas.[7]

In the May 2008 xenophobic riots in South Africa, violence against foreign nationals was reported in Kya Sands,[8] with police deployed to the area to try and curb attacks.[9]

As homes in the settlement are so close together, built from reused materials such as wood and plastic, and that most heating, lighting and cooking is done using open flames, fire poses a significant threat to the residents of Kya Sands.[6][7] 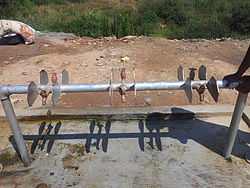 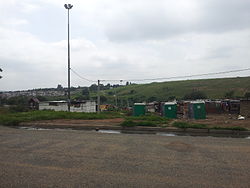 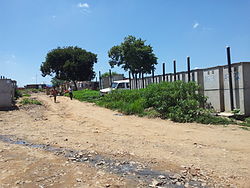 Local authorities, in the form of the Gauteng Provincial Government and the City of Johannesburg, have proposed a number of plans for long and short term intervention in Kya Sands, since 2007.[6] While some short-term plans have been implemented, no long-term action (relocation or in-sutu upgrading) has been taken. On the contrary, the settlement has been extended since 2012, by government relocations to Kya Sands, from other nearby informal settlements.[6]

Between 2006 and 2008, a number of short term emergency interventions were implemented by the City of Johannesburg. These included the installation of basic services including stand pipes, ventilated pit latrines, and establishing a waste removal service through Pikitup.[7]

Between 2007 and 2008, some 150 households were moved by the City of Johannesburg from the western shore of the river, to section D of the settlement.[7]

In response to safety concerns, residents of Kya Sands had regularly called for a bridge to be built across the river. [6][21] A bridge has now been constructed connecting Section C to Pipeline.[22][23]

Residents of Kya Sands periodically stage housing and service delivery protests,[5] with the most recent protest taking place on 12 October 2015.[24]

Retrieved from "http://en.turkcewiki.org/w/index.php?title=Kya_Sands,_Johannesburg&oldid=941817186"
This website is a mirror of Wikipedia, and is not affiliated with the Wikimedia Foundation.
Categories:
Hidden categories: