The standard measure of a distribution's kurtosis, originating with Karl Pearson,[1] is a scaled version of the fourth moment of the distribution. This number is related to the tails of the distribution, not its peak;[2] hence, the sometimes-seen characterization of kurtosis as "peakedness" is incorrect. For this measure, higher kurtosis corresponds to greater extremity of deviations (or outliers), and not the configuration of data near the mean.

The kurtosis is the fourth standardized moment, defined as

where μ4 is the fourth central moment and σ is the standard deviation. Several letters are used in the literature to denote the kurtosis. A very common choice is κ, which is fine as long as it is clear that it does not refer to a cumulant. Other choices include γ2, to be similar to the notation for skewness, although sometimes this is instead reserved for the excess kurtosis.

The kurtosis is bounded below by the squared skewness plus 1:[4]:432

where μ3 is the third central moment. The lower bound is realized by the Bernoulli distribution. There is no upper limit to the kurtosis of a general probability distribution, and it may be infinite.

is the standard deviation of

. In particular if all of the Xi have the same variance, then this simplifies to

The reason not to subtract off 3 is that the bare fourth moment better generalizes to multivariate distributions, especially when independence is not assumed. The cokurtosis between pairs of variables is an order four tensor. For a bivariate normal distribution, the cokurtosis tensor has off-diagonal terms that are neither 0 nor 3 in general, so attempting to "correct" for an excess becomes confusing. It is true, however, that the joint cumulants of degree greater than two for any multivariate normal distribution are zero.

For two random variables, X and Y, not necessarily independent, the kurtosis of the sum, X + Y, is

Note that the binomial coefficients appear in the above equation.

The exact interpretation of the Pearson measure of kurtosis (or excess kurtosis) used to be disputed, but is now settled. As Westfall notes in 2014[2], "...its only unambiguous interpretation is in terms of tail extremity; i.e., either existing outliers (for the sample kurtosis) or propensity to produce outliers (for the kurtosis of a probability distribution)." The logic is simple: Kurtosis is the average (or expected value) of the standardized data raised to the fourth power. Any standardized values that are less than 1 (i.e., data within one standard deviation of the mean, where the "peak" would be), contribute virtually nothing to kurtosis, since raising a number that is less than 1 to the fourth power makes it closer to zero. The only data values (observed or observable) that contribute to kurtosis in any meaningful way are those outside the region of the peak; i.e., the outliers. Therefore, kurtosis measures outliers only; it measures nothing about the "peak".

Many incorrect interpretations of kurtosis that involve notions of peakedness have been given. One is that kurtosis measures both the "peakedness" of the distribution and the heaviness of its tail.[5] Various other incorrect interpretations have been suggested, such as "lack of shoulders" (where the "shoulder" is defined vaguely as the area between the peak and the tail, or more specifically as the area about one standard deviation from the mean) or "bimodality".[6] Balanda and MacGillivray assert that the standard definition of kurtosis "is a poor measure of the kurtosis, peakedness, or tail weight of a distribution"[5]:114 and instead propose to "define kurtosis vaguely as the location- and scale-free movement of probability mass from the shoulders of a distribution into its center and tails".[5]

In 1986 Moors gave an interpretation of kurtosis.[7] Let

where X is a random variable, μ is the mean and σ is the standard deviation.

Now by definition of the kurtosis

, and by the well-known identity

The excess kurtosis is defined as kurtosis minus 3. There are 3 distinct regimes as described below.

The coin toss is the most platykurtic distribution 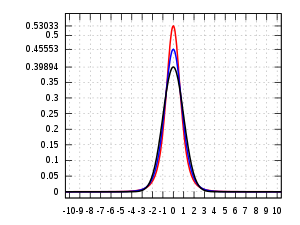 pdf for the Pearson type VII distribution with excess kurtosis of infinity (red); 2 (blue); and 0 (black) 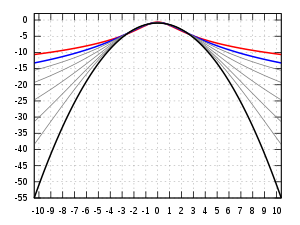 The effects of kurtosis are illustrated using a parametric family of distributions whose kurtosis can be adjusted while their lower-order moments and cumulants remain constant. Consider the Pearson type VII family, which is a special case of the Pearson type IV family restricted to symmetric densities. The probability density function is given by

where a is a scale parameter and m is a shape parameter.

All densities in this family are symmetric. The kth moment exists provided m > (k + 1)/2. For the kurtosis to exist, we require m > 5/2. Then the mean and skewness exist and are both identically zero. Setting a2 = 2m − 3 makes the variance equal to unity. Then the only free parameter is m, which controls the fourth moment (and cumulant) and hence the kurtosis. One can reparameterize with

is the excess kurtosis as defined above. This yields a one-parameter leptokurtic family with zero mean, unit variance, zero skewness, and arbitrary non-negative excess kurtosis. The reparameterized density is

In the limit as

one obtains the density

which is shown as the red curve in the images on the right.

In the other direction as

one obtains the standard normal density as the limiting distribution, shown as the black curve.

In the images on the right, the blue curve represents the density

(which, strictly speaking, means that the fourth moment does not exist). The red curve decreases the slowest as one moves outward from the origin ("has fat tails"). 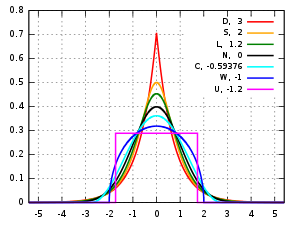 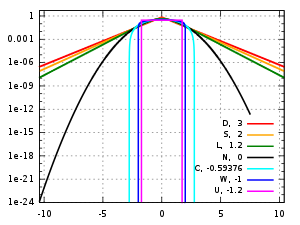 Several well-known, unimodal and symmetric distributions from different parametric families are compared here. Each has a mean and skewness of zero. The parameters have been chosen to result in a variance equal to 1 in each case. The images on the right show curves for the following seven densities, on a linear scale and logarithmic scale:

Note that in these cases the platykurtic densities have bounded support, whereas the densities with positive or zero excess kurtosis are supported on the whole real line.

One cannot infer that high or low kurtosis distributions have the characteristics indicated by these examples. There exist platykurtic densities with infinite support,

and there exist leptokurtic densities with finite support.

and there exist leptokurtic densities that appear flat-topped,

For a sample of n values the sample excess kurtosis is

is the sample mean.

This formula has the simpler representation,

values are the standardized data values using the standard deviation defined using n rather than n − 1 in the denominator.

The average of these values is 18.05 and the excess kurtosis is thus 18.05 − 3 = 15.05. This example makes it clear that data near the "middle" or "peak" of the distribution do not contribute to the kurtosis statistic, hence kurtosis does not measure "peakedness". It is simply a measure of the outlier, 999 in this example.

is the sample skewness

Stated differently, under the assumption that the underlying random variable

is normally distributed, it can be shown that

is the sample mean. Unfortunately,

is itself generally biased. For the normal distribution it is unbiased.[3]

The sample kurtosis is a useful measure of whether there is a problem with outliers in a data set. Larger kurtosis indicates a more serious outlier problem, and may lead the researcher to choose alternative statistical methods.

D'Agostino's K-squared test is a goodness-of-fit normality test based on a combination of the sample skewness and sample kurtosis, as is the Jarque–Bera test for normality.

For non-normal samples, the variance of the sample variance depends on the kurtosis; for details, please see variance.

Pearson's definition of kurtosis is used as an indicator of intermittency in turbulence.[16]

A concrete example is the following lemma by , He, Zhang and Zhang[17]: Assume a random variable

many independent copies. Then

This shows that with

many samples, we will see one that is above the expectation with probability at least

. In other words: If the kurtosis is large, we might see a lot values either all below or above the mean.

Applying band-pass filters to digital images, kurtosis values tend to be uniform, independent of the range of the filter. This behavior, termed kurtosis convergence, can be used to detect image splicing in forensic analysis.[18]

A different measure of "kurtosis" is provided by using L-moments instead of the ordinary moments.[19][20]

Retrieved from "http://en.turkcewiki.org/w/index.php?title=Kurtosis&oldid=965968832"
This website is a mirror of Wikipedia, and is not affiliated with the Wikimedia Foundation.
Categories:
Hidden categories: