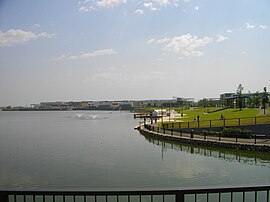 Koshigaya is situated in eastern Saitama Prefecture, in the alluvial plain of the Nakagawa basin between the Omiya plateau and the Shimosa plateau. Most of the city area is flat with an average elevation of only five meters above sea level. Many rivers, including the Motoara River, Naka River, Ayase River, Furutone River, and Sakagawa River flow in the city. Koshigaya, which is about 25 kilometers north of Tokyo and developed as a transportation for water and land transportation from premodern times.

Koshigaya has a Humid subtropical climate (Köppen Cfa) characterized by warm summers and cool winters with light to no snowfall. The average annual temperature in Koshigaya is 14.7 °C. The average annual rainfall is 1408 mm with September as the wettest month. The temperatures are highest on average in August, at around 26.4 °C, and lowest in January, at around 3.1 °C.[2]

Per Japanese census data,[4] the population of Koshigaya has increased rapidly from the 1960s.

The area around Koshigaya was an inlet of the sea in the Jōmon period and was settle during the Yayoi or early Kofun period. In the Nara period, it was a border area straddling Musashi and Shimōsa Provinces. Koshigaya-shuku prospered during the Edo period as a post station on the Nikkō Kaidō and the Ōshū Kaidō highways, and the town served as the temporary residence of the Tokugawa shōgun after the 1657 Great Fire of Meireki which destroyed Edo Castle. The town also had a riverine connection with Edo and served as a transportation and transshipment center.

Koshigaya has a mayor-council form of government with a directly elected mayor and a unicameral city council of 32 members. Koshigaya contributes four members to the Saitama Prefectural Assembly. In terms of national politics, the city is part of Saitama 3rd district of the lower house of the Diet of Japan.

Koshigaya is a major regional commercial center with a diversified industrial base.

Retrieved from "http://en.turkcewiki.org/w/index.php?title=Koshigaya&oldid=1008494556"
This website is a mirror of Wikipedia, and is not affiliated with the Wikimedia Foundation.
Categories:
Hidden categories: