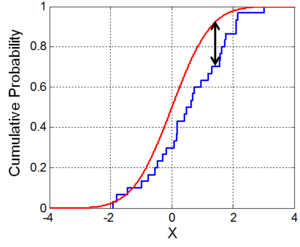 Illustration of the Kolmogorov–Smirnov statistic. The red line is a model CDF, the blue line is an empirical CDF, and the black arrow is the K–S statistic.

In statistics, the Kolmogorov–Smirnov test (K–S test or KS test) is a nonparametric test of the equality of continuous (or discontinuous, see Section 2.2), one-dimensional probability distributions that can be used to compare a sample with a reference probability distribution (one-sample K–S test), or to compare two samples (two-sample K–S test). It is named after Andrey Kolmogorov and Nikolai Smirnov.

The two-sample K–S test is one of the most useful and general nonparametric methods for comparing two samples, as it is sensitive to differences in both location and shape of the empirical cumulative distribution functions of the two samples.

The Kolmogorov–Smirnov test can be modified to serve as a goodness of fit test. In the special case of testing for normality of the distribution, samples are standardized and compared with a standard normal distribution. This is equivalent to setting the mean and variance of the reference distribution equal to the sample estimates, and it is known that using these to define the specific reference distribution changes the null distribution of the test statistic (see Test with estimated parameters). Various studies have found that, even in this corrected form, the test is less powerful for testing normality than the Shapiro–Wilk test or Anderson–Darling test.[1] However, these other tests have their own disadvantages. For instance the Shapiro–Wilk test is known not to work well in samples with many identical values.

is the indicator function, equal to 1 if

and equal to 0 otherwise.

where supx is the supremum of the set of distances. By the Glivenko–Cantelli theorem, if the sample comes from distribution F(x), then Dn converges to 0 almost surely in the limit when

goes to infinity. Kolmogorov strengthened this result, by effectively providing the rate of this convergence (see Kolmogorov distribution). Donsker's theorem provides a yet stronger result.

In practice, the statistic requires a relatively large number of data points (in comparison to other goodness of fit criteria such as the Anderson–Darling test statistic) to properly reject the null hypothesis. 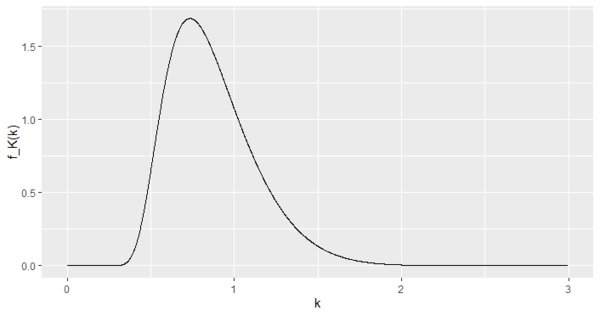 Illustration of the Kolmogorov distribution's PDF.

where B(t) is the Brownian bridge. The cumulative distribution function of K is given by[2]

which can also be expressed by the Jacobi theta function

Under null hypothesis that the sample comes from the hypothesized distribution F(x),

in distribution, where B(t) is the Brownian bridge.

If F is continuous then under the null hypothesis

converges to the Kolmogorov distribution, which does not depend on F. This result may also be known as the Kolmogorov theorem. The accuracy of this limit as an approximation to the exact cdf of

is finite is not very impressive: even when

, the corresponding maximum error is about

; this error increases to

and to a totally unacceptable

. However, a very simple expedient of replacing

respectively; such accuracy would be usually considered more than adequate for all practical applications.[5]

The goodness-of-fit test or the Kolmogorov–Smirnov test can be constructed by using the critical values of the Kolmogorov distribution. This test is asymptotically valid when

. It rejects the null hypothesis at level

where Kα is found from

The asymptotic power of this test is 1.

Fast and accurate algorithms to compute the cdf

or its complement for arbitrary

Using estimated parameters, the questions arises which estimation method should be used. Usually this would be the maximum likelihood method, but e.g. for the normal distribution MLE has a large bias error on sigma. Using a moment fit or KS minimization instead has a large impact on the critical values, and also some impact on test power. If we need to decide for Student-T data with df = 2 via KS test whether the data could be normal or not, then a ML estimate based on H0 (data is normal, so using the standard deviation for scale) would give much larger KS distance, than a fit with minimum KS. In this case we should reject H0, which is often the case with MLE, because the sample standard deviation might be very large for T-2 data, but with KS minimization we may get still a too low KS to reject H0. In the Student-T case, a modified KS test with KS estimate instead of MLE, makes the KS test indeed slightly worse. However, in other cases, such a modified KS test leads to slightly better test power.

Under the assumption that

is non-decreasing and right-continuous, with countable (possibly infinite) number of jumps, the KS test statistic can be expressed as:

and hence, the distribution of

depends on the null distribution

, i.e., is no longer distribution-free as in the continuous case. Therefore, a fast and accurate method has been developed to compute the exact and asymptotic distribution of

is purely discrete or mixed,[8] implemented in C++ and in the KSgeneral package [9] of the R language. The functions disc_ks_test(), mixed_ks_test() and cont_ks_test() compute also the KS test statistic and p-values for purely discrete, mixed or continuous null distributions and arbitrary sample sizes. The KS test and its p-values for discrete null distributions and small sample sizes are also computed in [12] as part of the dgof package of the R language. Major statistical packages among which SAS PROC NPAR1WAY,[13] Stata ksmirnov [14] implement the KS test under the assumption that

is continuous, which is more conservative if the null distribution is actually not continuous (see [15] [16] [17]). 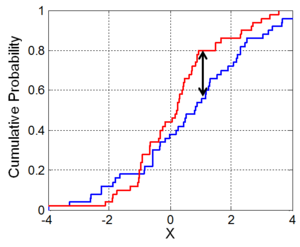 are the empirical distribution functions of the first and the second sample respectively, and

is the supremum function.

For large samples, the null hypothesis is rejected at level

are the sizes of first and second sample respectively. The value of

so that the condition reads

Here, again, the larger the sample sizes, the more sensitive the minimal bound: For a given ratio of sample sizes (e.g.

), the minimal bound scales in the size of either of the samples according to its inverse square root.

Note that the two-sample test checks whether the two data samples come from the same distribution. This does not specify what that common distribution is (e.g. whether it's normal or not normal). Again, tables of critical values have been published. A shortcoming of the Kolmogorov–Smirnov test is that it is not very powerful because it is devised to be sensitive against all possible types of differences between two distribution functions. Some argue[19][20] that the Cucconi test, originally proposed for simultaneously comparing location and scale, can be much more powerful than the Kolmogorov–Smirnov test when comparing two distribution functions.

Setting confidence limits for the shape of a distribution function[edit]

While the Kolmogorov–Smirnov test is usually used to test whether a given F(x) is the underlying probability distribution of Fn(x), the procedure may be inverted to give confidence limits on F(x) itself. If one chooses a critical value of the test statistic Dα such that P(Dn > Dα) = α, then a band of width ±Dα around Fn(x) will entirely contain F(x) with probability 1 − α.

The Kolmogorov–Smirnov statistic in more than one dimension[edit]

A distribution-free multivariate Kolmogorov–Smirnov goodness of fit test has been proposed by Justel, Peña and Zamar (1997).[21] The test uses a statistic which is built using Rosenblatt's transformation, and an algorithm is developed to compute it in the bivariate case. An approximate test that can be easily computed in any dimension is also presented.

or any of the other two possible arrangements is used. One might require that the result of the test used should not depend on which choice is made.

One approach to generalizing the Kolmogorov–Smirnov statistic to higher dimensions which meets the above concern is to compare the cdfs of the two samples with all possible orderings, and take the largest of the set of resulting K–S statistics. In d dimensions, there are 2d−1 such orderings. One such variation is due to Peacock[22] (see also Gosset[23] for a 3D version) and another to Fasano and Franceschini[24] (see Lopes et al. for a comparison and computational details).[25] Critical values for the test statistic can be obtained by simulations, but depend on the dependence structure in the joint distribution.

The Kolmogorov-Smirnov test (one or two sampled test verifies the equality of distributions) is implemented in many software programs:

Retrieved from "http://en.turkcewiki.org/w/index.php?title=Kolmogorov–Smirnov_test&oldid=997018940"
This website is a mirror of Wikipedia, and is not affiliated with the Wikimedia Foundation.
Categories:
Hidden categories: