For other uses of the "Kodacolor" brand, see Kodacolor (disambiguation). 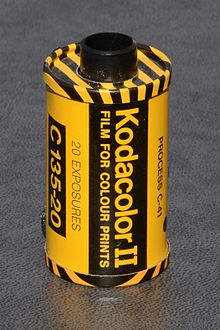 The name "Kodacolor" was originally used for a very different lenticular color home movie system, introduced in 1928 and retired after Kodachrome film made it obsolete in 1935.

When introduced, Kodacolor was sold with the cost of processing the film included, but prints were ordered separately. Both the film and processing procedures were revised through the years. The speed was increased to 32/16° in the 1950s.

After Kodak lost its anti-trust case in 1954, starting in 1955 processing was no longer included in the price of Kodacolor.[5] Kodak made the processing information (by then C-22 process) and chemicals available to other film processing labs.

While Kodacolor film was normally daylight balanced, for a while starting in 1956 [6] it was balanced in-between daylight and tungsten, to allow use indoors, or with clear flash bulbs. This film used the prefix CU. This was not a great success, and the film returned to daylight balance a few years later.

Kodacolor was also available in Type A, balanced for 3400K photolamps. A suffix of A on the type number indicated Type A, such as C828A.

In 1958, Kodak made Kodacolor available in the 35 mm format. Prior to that, the only 35mm color film it offered was Kodachrome. 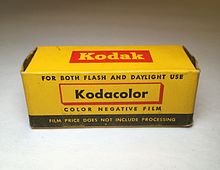 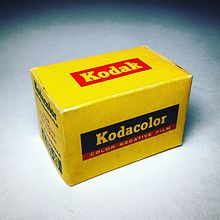 Kodacolor-X is a color negative film that was manufactured by Eastman Kodak between 1963 and 1974. It was introduced along with the Kodak Instamatic cameras which use 126 film.

The film was designed to be processed in the C-22 process, which is the predecessor to today's C-41 process.

Only a few specialty labs still process this film, due to the length of discontinuation. Surviving exposed (but unprocessed) Kodacolor-X and C-22 films can still yield color images, although this requires highly specialised development techniques.

Kodacolor-II was the first of a new generation of Kodak color negative films using the C-41 process. It was designed as a major improvement to meet the needs of the small 13×17 mm negatives used in 110 film for the Kodak Pocket Instamatic cameras.

The film was initially released in 1972 in the 110 size only, so that non-Kodak processing labs would have time to set up lines using the C-41 process. The other sizes were released in 1973. 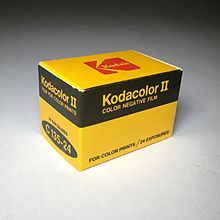 Kodacolor 400 was available by 1977. It offered a major speed increase over Kodacolor II.

Kodacolor HR was only available in the Disc format. It was Kodak's first color negative film to use their T-Grain technology. The T-Grain technology offers significant reduction in film grain, which is required for the very small 8×11 mm negatives used in the Kodak Disc cameras and film introduced in the same year.

It was also Kodak's first film to use an improved cyan color-coupler, that makes the cyan dye in the negative much more stable[7]

Kodacolor VR 1000 was announced in 1982, and available in 1983.[8] This is also a T-Grain film, which makes possible such a high speed film with tolerable grain. 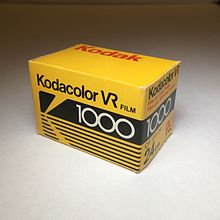 Kodacolor VR 100 was introduced along with the 200 and 400 speeds in 1982.[9][10] This transitioned the entire Kodacolor line of films to T-Grain technology.

The Kodacolor VR films were also Kodak's first to use developer-inhibitor-releaser, which improved edge effects for higher sharpness.[11] 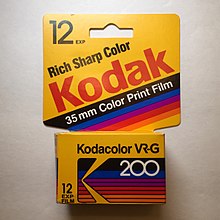 Retrieved from "http://en.turkcewiki.org/w/index.php?title=Kodacolor_(still_photography)&oldid=917127468"
This website is a mirror of Wikipedia, and is not affiliated with the Wikimedia Foundation.
Categories:
Hidden categories: