The goal of KDM is to ensure interoperability between tools for maintenance, evolution, assessment and modernization. KDM is defined as a metamodel that can be also viewed as an ontology for describing the key aspects of knowledge related to the various facets of enterprise software. KDM support means investment into the KDM ecosystem – a growing open-standard based cohesive community of tool vendors, service providers, and commercial components.

KDM defines precise semantic foundation for representing behavior, the so-called micro-KDM. It provides a high-fidelity intermediate representation which can be used, for example, for performing static analysis of existing software systems. micro-KDM is similar in purpose to a virtual machine for KDM, although KDM is not an executable model, or a constraint model, but a representation of existing artifacts for analysis purposes.

KDM facilitates incremental analysis of existing software systems, where the initial KDM representation is analyzed and more pieces of knowledge are extracted and made explicit as KDM to KDM transformation performed entirely within the KDM technology space. The steps of the knowledge extraction process can be performed by tools, and may involve the analyst.

KDM is the uniform language- and platform- independent representation. Its extensibility mechanism allows addition of domain-, application- and implementation-specific knowledge. 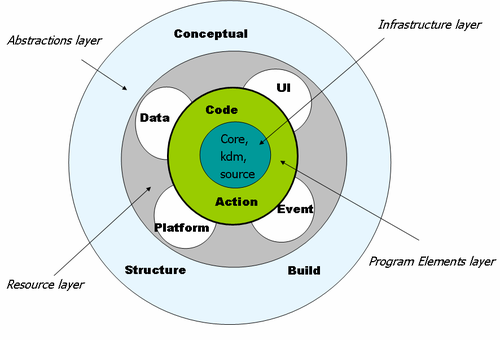 KDM packages are arranged into the following four layers:

The KDM Infrastructure Layer consists of the Core, kdm, and Source packages which provide a small common core for all other packages, the inventory model of the artifacts of the existing system and full traceability between the meta-model elements as links back to the source code of the artifacts, as well as the uniform extensibility mechanism. The Core package determines several of the patterns that are reused by other KDM packages. Although KDM is a meta-model that uses Meta-Object Facility, there is an alignment between the KDM Core and Resource Description Framework (RDF).

The Program Elements Layer consists of the Code and Action packages.

The Resource Layer represents the operational environment of the existing software system. It is related to the area of Enterprise Application Integration (EAI).

Retrieved from "http://en.turkcewiki.org/w/index.php?title=Knowledge_Discovery_Metamodel&oldid=1003492238"
This website is a mirror of Wikipedia, and is not affiliated with the Wikimedia Foundation.
Categories:
Hidden categories: