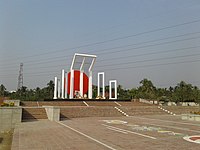 Khulna University of Engineering & Technology has a background of historical significance. Although this institution has completed an era as a university, its laying foundation began 49 years ago. This university was established in 1967 as ‘Khulna Engineering College’ under the University of Rajshahi. But during the period of the liberation war, the development activities of the Erstwhile Engineering College was suspended. After the Independence of Bangladesh in the year of 1971, the development works were started again in swing full. Overcoming all the constraints, the academic activities of the institute were virtually started from June 3, 1974 as per special direction of the Father of the Nation, Bangabandhu Sheikh Mujibur Rahman. Despite some limitations, the college was affiliated as a faculty of Engineering under Rajshahi University. The academic and administrative activities were controlled by the university authority and the Ministry of Education, respectively. The physical infrastructures were constructed by the public works department, while teacher recruitment was accomplished through Public Service Commission. Owing to multiple authorities, the co-ordination became complicated and hence the college authority faced many problems to run it smoothly. Even the admission of new students was stopped in one session due to the scarcity of teachers. In these circumstances, through a collective effort organized by the students, teachers, officers, staff and professional bodies, the four Engineering Colleges of the country including Khulna Engineering College were converted into autonomous Institutes named Bangladesh Institute of Technology (BIT) from July 1, 1986.

BIT, Khulna became Khulna University of Engineering & Technology with the other BITs as per act passed by the National Parliament effective from September 1, 2003.

There are three institutes at KUET for advanced research:

The admission process in KUET is highly competitive. Each year it opens about 1005 seats for undergraduate programs. About 10,000 applicants are invited to appear on an admission test. This preliminary filtration is done based on H.S.C. grade points in physics, chemistry, mathematics and English. The admission test is standardized to evaluate student ability to understand concepts of physics, chemistry, mathematics, and English language. Admission is offered to successful applicants on a merit basis, based on their scores in the admission test.

Students are admitted to a specific undergraduate academic program specializing in any of the 14 engineering tracks (e.g., CSE, EEE, ME, ECE, CE, IPE, BECM, TE, LE, URP, BME, Arch, ChE, ESE, MSE). Students may not change their track (major) once a few weeks of classes are passed.

Khulna University of Engineering & Technology (KUET) is at Fulbarigate, the northwest part of Khulna City (the third-largest south-western divisional city in Bangladesh). The campus is about 15 kilometers from the zero point of Khulna City.

The main academic building accommodates the teaching and research facilities. Each department is a separate entity with a courtyard around, and all the departments constitute an integrated complex. Heavy engineering laboratories are on the ground floor or other separate workshops. Light laboratories, classrooms and project rooms are on the upper floors. Separate offices for every member of the teaching staff are next to his/her laboratory.

The General Library system has 50,635 books, journals and periodicals. A library automation project to modernize and to improve administrative control over the collection of books, journals, proceedings, theses, etc. has recently been completed under Higher Education Quality Enhancement Project.[6] Moreover, the library is enriched every year by collecting recent books and journals.

Besides the general library system, each academic department maintains a rent-based library from which students can borrow textbooks at a nominal rate for the semester. Recently, KUET library has entered into a full automation system.

For the convenience of the students, faculties, officers, and staff KUET operates its own Shuttle Bus Service between Khulna City and the campus. On weekends special services are also provided for meeting the weekend recreational and other needs.

The central computer center (CCC) of KUET was established in 1988 under the supervision of the Department of Electrical and Electronic Engineering with six IBM desktop computers donated by BEXIMCO. To provide a fully integrated set of information support to the teaching, research and administrative functions, in 2006 it became us on independent center of KUET in a newly decorated building under the supervision of a nominated chairman from the university.

The CCC has served over the years as the hub for computer-related services in the campus with the commissioning of the university-wide network.

It has strong IT infrastructure with around 256 Mbit/s broadband line from BTCL and BdREN with 1 Mbit/s from other ISP as backup for Internet facility, routers for routing, a firewall for internet security, five high configuration server as mails server, proxy server, database server, seven midlevel configuration of workstations for other servers and backup server, a core switch, several manageable and unmanageable switches for intranet connectivity. It is planned to increase the bandwidth and to expand and renovate the optical backbone network including student halls of residence and teacher residential area secure access of the academic and research materials very soon.

Recently KUET has started a WiFi network in its Director of Student Welfare (DSW) and CCC arena for students and at the departments of Electrical & Electronic Engineering (EEE) and Electronics, Computer Science and Engineering (CSE), Communication Engineering (ECE) for teachers. 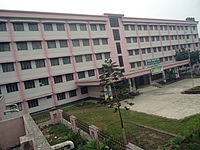 The residential halls provide facilities for the students, for example, hall library, prayer room, TV and recreational room including daily newspapers and magazines, etc. Generally, four students live in a room except for the two-seat rooms in Amar Ekushey Hall arranged for graduate students. These halls have dining rooms (Amar Ekushey Hall has two dining rooms) where monthly prepaid lunch and dinner are offered to the students.

KUET has a large playground at the eastern periphery of the main academic campus. It is used as venue of annual athletics competition of the university as well as cricket, football competitions. Students can access the facility all year round. KUET has tennis court in the main academic area. It also has a gymnasium near halls of residence where students can do gymnastics.

Every club of KUET aims to enhance the skill of the current students that later help them to shine further in their professional life. Most of the clubs have marked their footprints in several Inter-Varsity Competitions , Fests , TV and Radio Programs so far to exert their expertise beside academic activities , moreover gained appreciation and accolades in different years

Based on Co-curricular activities :[edit]

Based on Extracurricular activities :[edit]

Retrieved from "http://en.turkcewiki.org/w/index.php?title=Khulna_University_of_Engineering_%26_Technology&oldid=958807594"
This website is a mirror of Wikipedia, and is not affiliated with the Wikimedia Foundation.
Categories:
Hidden categories: